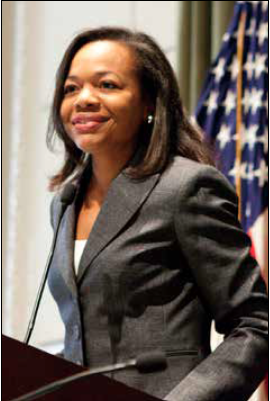 Yesterday, in Husted vs. A. Philip Randolph Institute, the U.S. Justice Department filed a brief in a critically important case about whether the National Voter Registration Act (NVRA) prevents certain types of purge programs.  The brief represents a reversal of the Justice Department’s position on the NVRA and opens the door for purge programs across the nation.

Kristen Clarke, president and executive director of the Lawyers’ Committee for Civil Rights Under Law stated:

“The Department of Justice’s latest reversal of its position in a critical voting rights case represents just the latest example of an agency whose leadership has lost its moral compass.  The law hasn’t changed since the department accurately told the court that Ohio’s voter purge was unlawful.  The facts haven’t changed.  Only the leadership of the department has changed.  The Justice Department’s latest action opens the door for wide-scale unlawful purging of the voter registration rolls across our country.  We fully condemn the Justice Department’s latest move to obstruct voting rights in the U.S.”

The NVRA imposes limits on when state officials can remove voters from the registration rolls because they have moved. In particular, the NVRA states that before officials can remove a voter from the rolls because they’ve moved the voter must notify officials that they have moved, or the official has to send a forwardable notice to the voter and wait two federal elections to see if there is any activity from the voter before taking any adverse action.  While most states will wait until there is some indication that a voter may have moved (i.e., return of a piece of mail or notice from the USPS) before turning to the process set forth in the NVRA, some states including Ohio and Georgia, send the notice based on mere voter inactivity alone.  In yesterday’s filing, the Justice Department indicated that the new administration has reconsidered this question and now sides with Ohio.  In its brief, the Justice Department indicates that it has “now concluded that the NVRA does not prohibit a state from using nonvoting as the basis for sending a Section 20507(d)(2) notice”.

The Lawyers’ Committee for Civil Rights Under Law has been focused on this administration’s efforts to obstruct civil rights enforcement and has condemned repeated actions taken to reverse positions or delay action in active matters handled by the Civil Rights Division.  Since Inauguration Day, the Justice Department has abandoned core claims in a long-standing case challenging Texas’s photo ID law and issued a letter to states concerning their purge policies under the NVRA and the Help America Vote Act (HAVA).  The administration has also launched the so-called Election Integrity Commission, a body that appears aimed at promoting laws and policies that will make it harder for Americans to vote.

About the Lawyers’ Committee for Civil Rights Under Law

The Lawyers’ Committee, a nonpartisan, nonprofit organization, was formed in 1963 at the request of President John F. Kennedy to involve the private bar in providing legal services to address racial discrimination. The Lawyers’ Committee celebrated its 50th Anniversary in 2013 as it continued its quest of “Moving America Toward Justice”. The principal mission of the Lawyers’ Committee is to secure, through the rule of law, equal justice under law, particularly in the areas of fair housing and fair lending, community development, employment, voting, education and environmental justice.

Ben Carson: Too Much Being Made About “Squabble” in Charlottesville