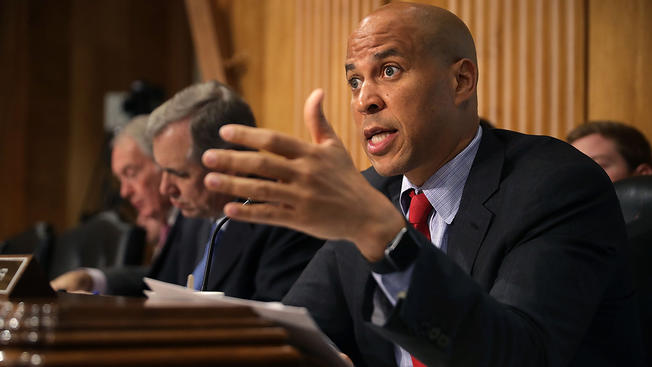 One advocate described it as “the single most far-reaching marijuana bill that’s ever been filed in either chamber of Congress”.

A new bill in the Senate would not just end the federal prohibition of marijuana, but encourage states to legalize pot as well.

The bill, proposed by Sen. Cory Booker (D-NJ) on Tuesday, would remove marijuana from the federal scheduling system, which is the basis for its federal criminalization. That isn’t new in the Senate; Sen. Bernie Sanders (I-VT), for one, also put forward a bill that would deschedule marijuana back in 2015.

Where Booker’s bill goes further is it actively encourages states to legalize cannabis. Specifically, the bill leverages federal funds to incentivize legalization in states that have enforced laws against marijuana in a way that disproportionately impacts low-income people and people of color — a category that includes virtually every state. (A 2015 report from the Sentencing Project, for one, estimated that Black Americans are 3.7 times as likely to be arrested for marijuana possession as their white counterparts, but only 1.3 times as likely to use pot.)

The measure addresses the two layers of prohibition. Under current federal law, pot remains illegal even in states that have legalized — creating big barriers to states that have legalized, including restrictions on business tax deductions and access to banking. But whether marijuana is legal, decriminalized or illegal at the state or local level is decided through state or local law — meaning that a city or state could conceivably keep marijuana illegal even if the federal government removes all of its own restrictions.

“This is the single most far-reaching marijuana bill that’s ever been filed in either chamber of Congress,” Tom Angell, head of the pro-legalization Marijuana Majority, said in a statement. “More than just getting the federal government out of the way so that states can legalize without DEA harassment, this new proposal goes even further by actually punishing states that have bad marijuana laws.”

The legislation would also be retroactive, so it would automatically expunge federal marijuana use and possession crimes from people’s records and let those currently serving time in prison for marijuana use or possession petition for resentencing. And it’d create “a community reinvestment fund” that Booker’s office said would go toward job training, reentry services and community centers, among other programs.

The bill faces no chances of getting through Congress. But it shows the remarkable turnaround that legalization has taken over the past few years. At the beginning of 2012 no state had legalized marijuana. Just five years later, eight states — including California, the most populous — have legalized pot.

And now a well-known Democratic politician is proposing and even hoping to encourage legalization.

Booker has long criticized the war on drugs and supported medical marijuana legalization but his office said this is the most sweeping proposal he’s ever put forward on changing the nation’s drug laws. (When I asked Booker if he supports legalization in 2015, his answer was, well, unclear. Now we have a very clear answer.)

But Booker will face stiff opposition in Congress, where most members remain publicly opposed to legalization, and the Trump Administration, which has vowed to crack down on states that have legalized marijuana within their borders.

Although legalization doesn’t have much political traction in Washington, it’s backed by a majority of Americans. Gallup’s surveys found support for legalization rose to 60 percent in 2016, up from 58 percent in 2015 and 25 percent in 1995. The last big issue to see that kind of rise in public support was same-sex marriage.