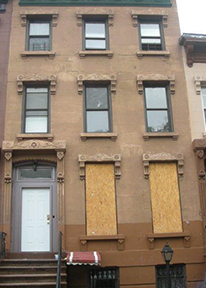 New York City Public Advocate Letitia James cast a harsh spotlight on Justice Lawrence S. Knipel, the administrative judge in charge of civil cases in Brooklyn Supreme Court, at a meeting convened Friday under the leadership of Brooklyn Congresswoman Yvette Clarke to examine the impact of foreclosures upon communities of color.

During the course of the meeting at Brooklyn Law School, James rose on several occasions to express dismay over the way foreclosure cases are being handled in Brooklyn and angrily vowed to seek a meeting with him.

About 70 public officials, homeowners’ lawyers and their clients attended the session. The session was presented in conjunction with the New York State Foreclosure Defense Bar.

The message from about a dozen lawyers and their clients, who were designated as presenters, was clear: the foreclosure crisis of the Great Recession is not over. To the contrary, the crisis is greater than ever because government-related entities, such as Fannie Mae, have been selling off huge amounts of troubled mortgages at bargain prices to investors, who, in Brooklyn, are pressing hard for foreclosures so they can take advantage of rising prices as gentrification in some of its poorer neighborhoods speeds ahead.

David J. Bryan, director of economic advocacy at Brooklyn Legal Service Corp. A, said that Fannie Mae and other like entities “will accept the loss of a substantial portion of the homeowners debt when the loans are sold to a hedge fund but not to help homeowners save their homes.”

“Hedge funds win and Jane Public loses,” Bryan explained, because, for example Fannie Mae has rulemaking authority to forgive principal on loans it owns but chose not to exercise it, even though the Treasury Department has required private holders of mortgage debt to consider forgiveness.

In that vein, a report released by TARP’s Special Inspector General Christy Goldsmith Romero on January 27, found that $11 billion of the TARP funds set aside to fund the HAMP program in 2009 remains unspent. That is nearly 50 percent of the $22 billion originally earmarked to support HAMP. (See TARP Report on p.93.)  Unless reauthorized, HAMP will expire at the end of 2016.

TARP refers to the Troubled Asset Relief Program in which Congress approved a $700 billion bailout in 2008 for the nation’s collapsing financial system. Congress eventually pared the bailout to $475 million, of which $22 million was set aside to fund a program designed to provide mortgage relief to homeowners who had become delinquent in their payments. The HAMP (Home Affordable Mortgage Program) was designed to provide a process by which banks and homeowners, in appropriate instances, would negotiate downward modifications of the amount homeowners are required to pay on their mortgages.

The U.S. Treasury Department subsequently issued detailed guidelines to determine who is eligible to receive a modification and, if so, in what form and what amount.

Inspector General Romero also found that only 22 percent of more than 5 million requests for HAMP loan modifications had been approved as of November 2015. (TARP Report p.97)

A study prepared by the New York State Foreclosure Defense Bar buttresses the notion that minority communities in Brooklyn have been disproportionately impacted by the gentrification process. The foreclosure bar twinned data from the Federal Reserve Board of New York examining the number of foreclosures in 2013 by zip code with 2010 census data on the racial makeup of 171 zip codes within the state.

The results of that analysis, which was part of a Powerpoint presentation at the session, shows that four of the 10 zip codes with the highest number of foreclosures in 2013 were in Brooklyn. The percentage of Hispanic and black people living in those neighborhoods ranged from 85 percent in the vicinity of Cypress Hills and East New York to 96 percent in East Flatbush, Brownsville and nearby neighborhoods.

The new pressure to extract the gold now present in the distressed assets held by the likes of HUD, HFA, Fannie Mae and Freddy Mac comes against a backdrop of bank indifference and intransigence which has frustrated the operation of the HAMP program, said Jay Inwald, who oversees the foreclosure prevention practice of Legal Services NYC, which has aided 10,500  limited-income New York City homeowners since the HAMP program started in 2009.

Inwald noted that New York has very strong laws designed to help homeowners “avoid losing their homes”. Specifically, the state adopted a law in 2009 which dovetailed with the HAMP program to require holders of delinquent mortgages to negotiate “in good faith” before proceeding in court to foreclose upon homes. In 2014, the appeals court covering Brooklyn and Queens ruled that the bank adherence to the HAMP guidelines should be the measure of “good faith”.

Nonetheless, Inwald explained, banks frustrated the process by often (and repeatedly) losing the extensive paperwork homeowners were required to submit to qualify for a downward mortgage modification and refusing to process applications in the manner specified in HAMP guidelines.

More saliently, Inwald said, the courts have signaled a lukewarm approach to enforcing the requirement that banks negotiate in “good faith” with homeowners. In a follow-up interview, he explained that the legislation adopting the “good faith” requirement specifically instructed the Office of Court Administration (OCA) to adopt rules to ensure that court referees conducting the settlement conferences have the power to ensure that the parties refrain from “willful dilatory practices”.

Yet, the rules issued by OCA to implement the new settlement process were silent on what powers referees and judges have to enforce the “good faith” requirement. As a result, he added, the courts have been loath to enforce specific requirements enumerated in the new law (Civil Practice Rules and Procedures Section 3408) such as a requirement that banks appear at settlement conferences with full authority to “dispose” of a case. Instead, he said, banks routinely use attorneys who are only hired for the day and lack basic information about the case.

Residential Foreclosure Judges Cut from 25 to 2

Against this backdrop, Inwald said, Knipel in January overhauled the assignment of residential mortgage foreclosure cases to reduce the number of judges handling them from about 25 to two. Under this plan, more than 6,000 pending residential foreclosure cases were reassigned to Brooklyn Justice Noach Dear, a former City Councilman who represented a predominantly Orthodox Jewish section of Brooklyn. The remaining 2,000 “old” residential cases were transferred to Justice Peter Sweeney. Previously, the residential cases had been randomly assigned among 25 judges, all of whom handled many different types of civil cases.

At Friday’s meeting, Inwald said it is “difficult to imagine” how a single judge could handle 6,000 cases without “causing an even more substantial backlog or reverting to a rubber-stamp process”.

Inwald’s description of the problems posed by shifting 6,000 residential cases to a single judge is what brought Public Advocate James to her feet. She angrily demanded in reference to Knipel, “Who is this Supreme Court Judge?” and vowed to seek a meeting with him.

That was one of several occasions in which James rose to express her dismay with the way foreclosure cases are being handled in Brooklyn and elsewhere in New York City. One of those instances was in response to the account of Carl Tripp, a manager of a U.S. Postal Office in Brooklyn. Tripp related how he had been offered a mortgage modification by Chase Bank, and had paid his mortgage at the lower rate for six months, more than twice the time period specified in the HAMP guidelines. Nonetheless, Tripp said Chase refused to make the loan modification permanent.

Reflecting upon Tripp’s treatment and the similar experience of another homeowner James said, “No one should be treated like that”.

Several of the homeowner lawyers at the meeting recounted that only a day earlier, at their request, Knipel had met with them to discuss concerns about the assignment of so many residential cases to Justice Dear. They reported that at the meeting Knipel had been unresponsive to the issues they raised.

Lucien Chalfin, OCA’s Director of Public Information, declined to defend the new assignment system in Brooklyn or state whether Knipel would meet with James. Instead, he wrote in an e-mail, “We don’t comment on assignments and certainly not on pending matters before the court”.

One wonders whether OCA will give Public Advocate James the same response when she requests a meeting with Knipel.

Nor will James be alone in seeking to resurrect and reform HAMP. The meeting was attended by state Assembly members Annette Robinson, Eric Dilan and Latrice Walker, and Jumaane Williams and Inez Barron, both members of the City Council. All five, as well as Congresswoman Clarke, agreed to press officials at their level of government to put HAMP back on track.  Dan Wise reports on WiseLawNY, a blog about the courts and law in NYC. https://wiselawny.wordpress.com

Impact of Foreclosure Upon Communities of Color