It’s More Than A Crawl
Advertisement 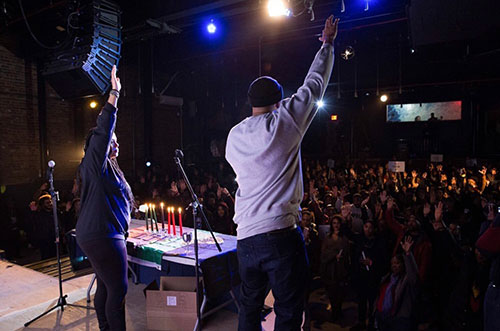 So, I arrive at The Black Lady Theater at 11am sharp for sound check. A week prior to my arrival for sound check, I received an email from my friend Kerry Coddett. She asked if I would like to address the participants of Kwanzaa Crawl, I’d be speaking to the crowd about Kwanzaa. Kerry and her sister Krystal started the Kwanzaa Crawl in 2016. The concept is simple, yet genius. Create a bar crawl that supports black-owned restaurants and bars in the community. In the four years since its beginning. Kwanzaa has grown from 1,600 participants crawling through 17 businesses, to over 5,000 participants crawling through 36 businesses in two boroughs – Harlem was added in 2018.
I arrive for sound check to find a small army of Black men and women tackling the logistics with passion and precision. Joelle the Event Manager was sharp as a tack. She introduced herself, guided me to a sitting area and at once she was back on the floor of the theater managing traffic and fielding concerns. I notice immediately that everyone working is engaged in the thing. This event, it’s a full-on production. There are team managers, routes, maps, shirts, cups, signs and press that all need to be managed and accounted for. I did my soundcheck with DJ One, a good guy that I’ve known for years. By noon, participants began rolling in.

By 1 o’clock the place is packed. The excitement sounds like a constant buzz, people greeting old friends and meeting new ones, taking selfies and checking their maps for the destinations. HBCU sweatshirts, Fraternity and Sorority paraphernalia, leather jackets, berets, dashikis – the floor of the theater looks like a homecoming gathering. Participants on the floor are grouped by teams. The teams vary in number. For example, Influencer Rae Holliday had 125 people on his team, while my friend, brand consultant Nykia Spradley had maybe 30 on her team. The festivities begin with Kerry and Krystal welcoming the vibrant crowd and explaining the rules of the crawl. It ends with a group of young women singing a wonderful rendition of Lift Every Voice and Sing. I spoke in the middle. As I stood on the stage speaking to the crowd, I noticed that many of these people were folk that I knew in some form or another. I saw old High School classmates and old co-workers. I saw people I grew up with and people that I was once on panel discussions with. This wasn’t some Santa-Con event or something sleazy produced to draw out drunkards and the like. This crowd was filled with community resources, men and women celebrating blackness, all of them tied together with a vested interest in celebrating the holidays by spending their beer, wine and spirits money with black-owned businesses.

There were two opening ceremonies and after the second one was done I got a chance to hit the crawl. My first stop was Mo’s on Lafayette Avenue, when I got there Team 11 had just arrived. My guy Dot Ichiro was spinning tunes and the crowd was celebrating. The whole thing felt like an office holiday party, if you worked at the coolest office in Brooklyn. There was an energy, festive and prideful. I grabbed a glass of red wine and sat in the rear of Mo’s near the DJ booth. I happened to look out of the window and I saw dozens of folk swag surfing in front of the bar! Literally, dozens of people dancing in unison outside of Mo’s. It was Team 16D, one of the more exciting teams I came across during the crawl. They entered the bar with verve and swagger and raised the level of the fete. I didn’t follow Team 16D to their next spot but someone sent me a video of them dancing on Lafayette Avenue across from BAM. They had joined with another team, and with their rank and file reaching around 200 people, their impromptu performance was beautiful to watch.

Five core values of Kwanzaa are gathering, reverence, commemoration, recommitment and celebration. The Kwanzaa Crawl offers each of those. In neighborhoods where Black businesses and residents are being pushed out from gentrification and the fact that rent is too damn high, the founders of The Kwanzaa Crawl have found a way to connect the dots, providing a cooperative economics paradigm while using the holiday season as a backdrop to gather, educate and celebrate. And, it’s a good time too. A very good time.

Is it Time to Go Home?