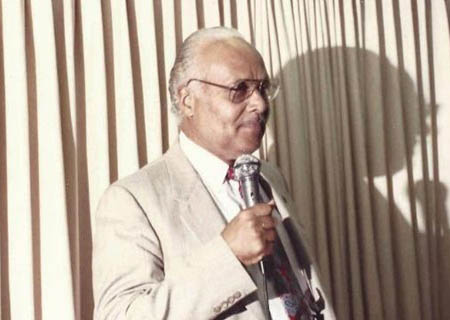 Rev. C. Herbert Oliver’s daughter confirmed that the legendary figure died on November 30 in Brooklyn after being admitted to the hospital for respiratory problems.
His daughter, Patrice Oliver, told the New York Times that he had been admitted to a hospital about a week earlier.
Oliver was a giant in the fight for Civil Rights in the 1960s.
He served as secretary on a board of black ministers in Birmingham, Alabama, who created the Inter-Citizens Committee to document police abuse of black Americans.
The group documented 98 cases of suspicious deaths in police custody, many of which occurred under segregationist police commissioner T Eugene (Bull) Connor.

Oliver’s work brought national attention to the gravity of the ongoing racism in the American South in the early 1960s, particularly when he documented the bombing of the 16th Street Baptist Church in Birmingham in 1963.
Four young girls were killed in the attack.
Oliver wrote a brutally candid letter about what he witnessed watching the attack from across the street.
“The savage, brutal, murderous, and ungodly bombing has revealed to the whole world the evil of racism,” the reverend wrote.
“Those few terrifying moments of the blast said what we have been trying to say to the nation for years, that there exists in Alabama the most unconscionable disregard for man and God on the part of some.”
In 1967, Oliver moved on to serve as chairman of a new school board in the Ocean Hill-Brownsville section of Brooklyn.
Oliver went on the challenge the way the public school system in New York City separated white and black children.

EARLY LIFE AND ACTIVISM
Rev Oliver, whose full name was Claude Herbert Oliver, was born in February 1925 in Birmingham.
He studied at the Missionary Training Institute in the early 1940s and later went on the graduate from Wheaton in Illinois with a degree in history.
According to The Times, the young reverend returned to Birmingham after police fatally shot a black minister who had been helping voters register.
“I went to the funeral home where the reverend was, and I stood over him in the casket,” Oliver once told the Wheaton magazine.
“I looked at him and thought, ‘If this is what they do to a minister, if something is not done to fix this system, then one day I will lie down like him, and it will be the end of me.’”
Oliver went on to earn bachelor’s and master’s degrees in theology at Westminster Theological Seminary in Pennsylvania.
Before returning to Birmingham, Oliver served as the pastor of an Orthodox Presbyterian Church in Maine.
He is survived by his daughter Patrice and son Claude, from his first marriage, his wife Lorna, and a grandson.