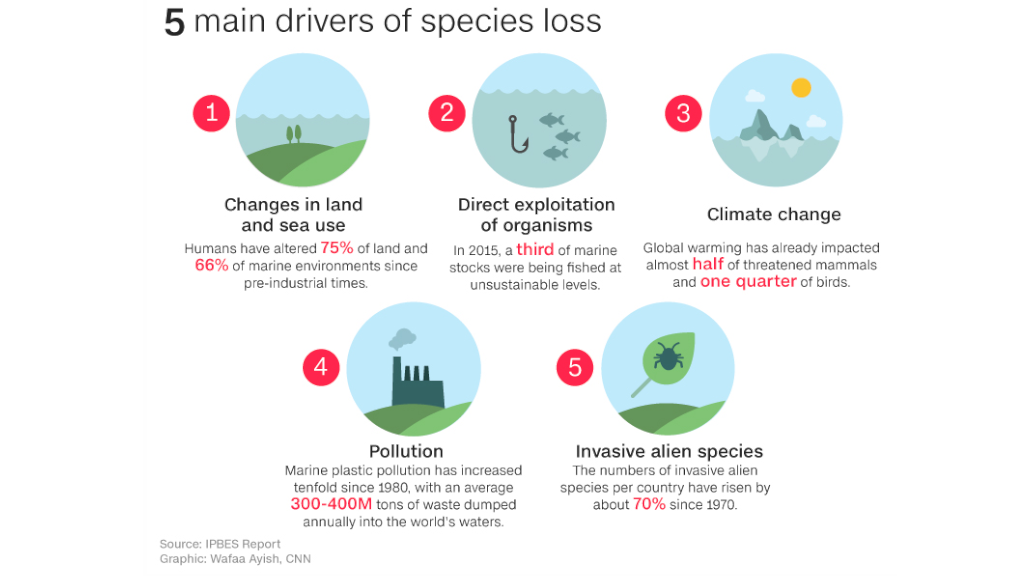 “The warning was unusually stark for a UN report that has to be agreed by consensus across all nations.”

Human society is in jeopardy from the accelerating decline of the Earth’s natural life-support systems, the world’s leading scientists have warned as they announced the results of the most thorough planetary health check ever undertaken.

From coral reefs flickering out beneath the oceans to rain forests desiccating into savannahs, nature is being destroyed at a rate tens to hundreds of times higher than the average over the past 10 years, according to the UN Global Assessment Report.

The biomass of wild mammals has fallen by 82%, natural ecosystems have lost about half their area and a million species are at risk of extinction – all largely as a result of human actions, said the study, compiled over three years by more than 450 scientists and diplomats.

Two in five amphibian species are at risk of extinction, as are one-third of reef-forming corals, while other marine animals are down by close to one-third. The picture for insects – which are crucial to plant pollination – is less clear, but conservative estimates suggest at least one in 10 are threatened with extinction and, in some regions, populations have crashed. In economic terms, the losses are jaw-dropping. Pollinator loss has put up to $577bn (£440bn) of crop output at risk, while land degradation has reduced the productivity of 23% of global land.

The knock-on impacts on humankind, including freshwater shortages and climate instability, are already “ominous” and will worsen without drastic remedial action, the authors said.

“The health of the ecosystems on which we and other species depend is deteriorating more rapidly than ever. We are eroding the very foundations of economies, livelihoods, food security, health and quality of life worldwide,” said Robert Watson, the chair of the Intergovernmental Science Policy Platform on Biodiversity and Ecosystem Services (Ibpes). “We have lost time. We must act now.”