How will you speak of what once was?
Advertisement 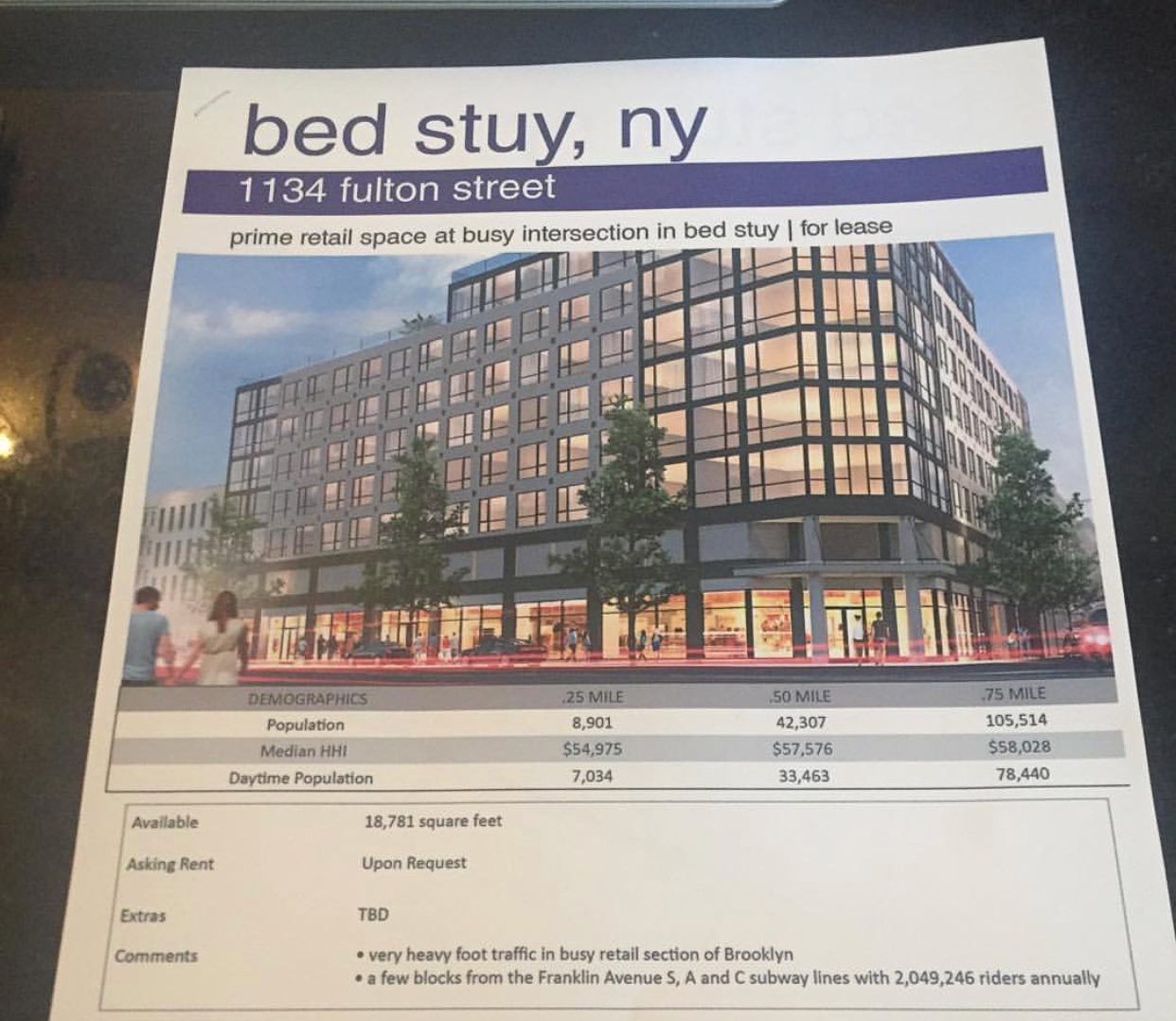 I am Old Brooklyn. Allow me to qualify this moniker for you.

Marketing of new developments is a sign of
changing times.

My mother was born in Kings County Hospital. She was raised at 1302 Pacific Street–living there from 1956 until we moved to Greene Avenue in 1990. My father was born in the Jewish Hospital that used to be on Prospect Place and Classon Avenue. He grew up on Madison Street and Nostrand Avenue. His mother moved into 751 St. Marks Place in 1969, and she lived there until she died in 2008. My parents were born and raised in the same neighborhood that I was born and raised in. That’s Old Brooklyn. I can remember being a child and walking through the neighborhood time and again with either my parents or my uncles and aunts. I can remember the stories–all of the stories that shaped the beginnings of my intimate familiarity with my community. Maybe it was just me, but when I was a kid I enjoyed being able to associate places in my neighborhood to experiences and stories that my family shared. Has to be the writer in me. I mean, even as an 8-year-old, I was always interested in the backstory. The Lerner’s that used to be in Restoration? My mom worked there when she was young. (925 Prospect Place?) That was where my father’s friend, Arthur Miller, used to live. He was killed by the police in 1978. That storefront on Nostrand? Family friend Richard Anderson’s father used to have a store there. These stories, they added context to the neighborhood for me, providing my book of life with the necessary prelude. Here is what has happened. This is why your story is even more important.

I am always walking in this community. The other day, I walked from Marcus Garvey Blvd. and Jefferson Avenue, all the way to the Atlantic Center Mall. I could remember when that mall area was barren, except for rail yards and the welfare hotel across the street. Along the way, I must’ve seen a dozen examples of new developments, cumbersome edifices rising out of the debris of Old Brooklyn. As I walked, I began to tell myself the stories of these spaces, just like my family would, squinting my eyes hoping that the story combined with my focus would help me to see it as it once was, before it wasn’t anymore. Tompkins between Halsey and Hancock? The building that they tore down to build on that land used to be a paint store. The last time I was in there was years ago, my nana sent me to pick out paint for her kitchen. There was a tall woman that used to work there back then. I saw her recently, she owns a hardware store on Nostrand now. I didn’t speak to her, but I remember her.

They are building on Franklin and Fulton, too; they tore down almost half a block worth of buildings to erect their new mixed-use space there. The biggest business to be moved from there was Key Food. Truth be told, I never shopped at that Key Food much, but it was humungous, so big that the entrance was on Fulton Street but the loading area for the food trucks was around the corner on Franklin. A couple of small restaurants, a health food store and a barber shop were some of the other businesses along that strip that were destroyed in order to build anew. Two years ago, I was the general manager at Melba’s Restaurant in Harlem. One day, a developer came into the place before we opened. He wanted to talk about this new development going up in Brooklyn. It was going to be commercial businesses along the ground floor and eight stories of residential space above. He was inquiring as to Melba’s interest in placing a soul food restaurant in the building. He pulled out the renderings, and lo and behold, it was the development on Franklin and Fulton! Melba and I laughed about that. The renderings had the building complete and depicted what would be a “normal” day in the community, people walking to and what not. The renderings were nice, except for one thing. There were no Black people in them. I kept the package that he left us, renderings and all. Years from now, when I’m walking in this community with my children, I will tell them that story. Just as my parents did for me, I will provide to their book of life a necessary prelude. It will say, “Here is what has happened. This is why your story is even more important.”

Charlie Davis and the Wandering Baton