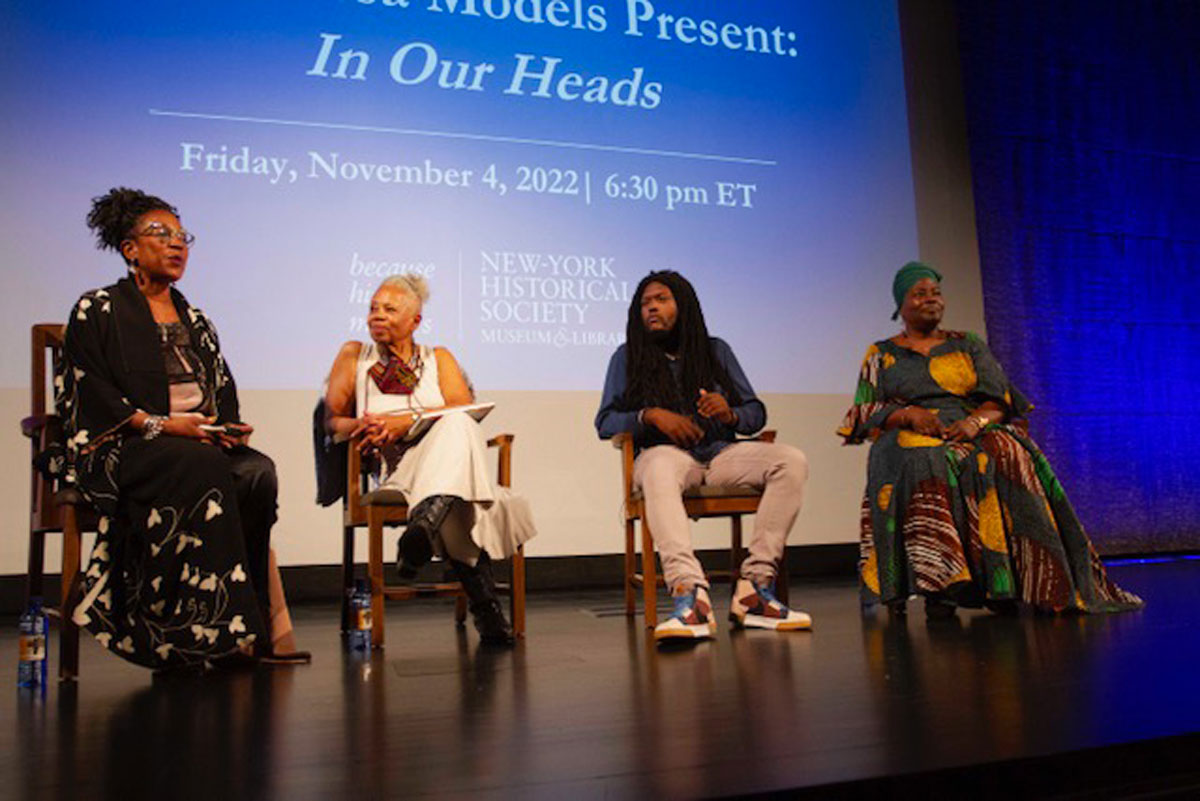 by Maitefa Angaza
There’s a wonderful photographic art show up at the New-York Historical Society (NYHS). Black Is Beautiful: The Photography of Kwame Brathwaite is a gorgeous and joyous celebration of art, purpose and pride. The exhibition salutes the power of this beautiful work by an artist who loves his people. Its impact spread beyond Black New York to other states and other nations, from 1962 to the late 1970s. It includes portraits and other photos of Nina Simone, Miles Davis, Max Roach, Abbey Lincoln, James Brown and many of the fabulous Grandassa Models.

These lovely women were invited by Kwame, his brother Elombe, Robert Gumbs, and others to be a part of a natural Black beauty and fashion show they’d presented and later to join the newly created Grandassa Models in the early 1960s. This year the former models were invited by NYHS to plan an evening celebrating their groundbreaking legacy. They chose to screen excerpts of In Our Heads About Our Hair followed by a panel discussion. Sikolo Brathwaite, Kwame’s wife, had seen the film at BAM several years ago and asked for a copy to be viewed by the other models. They agreed.

So an excerpt version was created and a panel put together to be moderated by Anu Prestonia, founder of the legendary Khamit Kinks natural hair salon. The panel included Melba Tolliver, the first Black woman TV news show anchor, Nana Baakan O. Yirenkyiwa, an educator and priestess and Hemamset Angaza, the film’s director and cinematographer.

“When I was in high school Melba Tolliver was on the news,” said Prestonia. “I saw a Black woman with natural hair on television and I thought, ‘I wanna be like that! I wanna be a journalist.’ And I went to Howard for journalism, but I started doing hair that summer and I never got back. But that was my first introduction to you. And then one day [decades later] I saw you sitting in my salon and I was like, “Oh my God, that’s Melba Tolliver!”
At the event Anu asked Tolliver if she’d known of the impact the show was having on Black people back then.

“I was just watching other people, always, and I’d say, ‘Hmm… I like that!’ And you’re a businesswoman. It’s a good thing you didn’t go into journalism. More people were needed for what you did and continued to do. You were such a pathbreaker, such a creator! You paved the way for a lot of people.”

After the NYHS screening, Cinque Brath, the late Elombe’s son, asked Melba a question. She’d said in the film that Elombe organized to help get her job back. Cinque wanted to know if Melba worked with his father at Like It Is or knew him through something else.

“Well,” said Melba, “I knew more about Elombe because he was quite influential on a lot of the programming at Like It Is and that’s how I knew him and the word got out. There was no march on WABC and ABC-TV and no protest. And it was very interesting the response that people had. Because even people who didn’t like my hair wrote to the station and said, ‘We don’t like her hair, but you’ve got nerve to be trying to tell her how to wear her hair!’
“Nothing we do ever starts from the top. It’s always the everyday people just doing their everyday thing. It’s really like you all, on whose shoulders other people were standing and just saying, this is what they wanna do.”

Nana Baakan was one who joined the Grandassa Models years later, eager to contribute.
“I met Baba Elombe and Kwame and other founders and members of AJASS in 1972. And at that time, we would not only model clothing, but we started doing political commentary. So like Sekou Toure, we would recite some of his writings and Kwame Nkrumah. There were times when we would write our own poems and share them.”

We even did a show one time at The EAST, and I put my daughter on my back, and that gave a message. So everything we did was to continue the legacy of the Grandassa founders and all of the great women who started it, we just took it a step further.“
She said that she modeled at The EAST with her baby daughter wrapped on her back and that her group was always looking to honor the original Grandassa models and incorporate some new ideas as well. She also had words for Tolliver.

“I would have to say for Melba Tolliver, we would sit around the television, watch you, and when you changed and you had your afro, you were gorgeous!” Yirenkyiwa also saluted Black Rose, one of the original Grandassas who, although in Brooklyn, was unable to attend.
“So it had a great impact, being one of the Grandassa Models and meeting all the beautiful women,” said Yirenkyiwa. “They were very knowledgeable in their own careers and family and all that. So it’s just been a wonderful journey!”
Anu asked the models to stand.
“Thank you Grandassa Models for all you did to start us on a path to acknowledging our true selves, our inner and outer beauty.”
Hemamset Angaza, the director and cinematographer of In Our Heads About Our Hair, was 19 when he began working with the women to make the film. He had just graduated film school at Brooklyn College after finishing Bard High School Early College with an associates degree. This film was conceived by Prestonia, who’d known Angaza since he was a child and decided to have him film a 20-minute production. The completed film was shot for 30 hours and edited down to 80 minutes.

“We started the film in 2009 and finished it in 2012 because we kept adding things that we felt we needed,” said Angaza. “People are sharing all this emotional stuff and the backstories… I grew up around natural hair and it hadn’t occurred to me that people had a lot of struggle trying to figure out what they wanted to do. I’m grateful to be able to say that something I made is full of stories with so much legacy and people I didn’t know about, like Melba Tolliver.”

Included along with Tolliver in the film is historian and author Dr. Farah Jasmine Griffin, author and academic Dr. Marc Lamont Hill, author Asha Bandele, and many other people from all walks of life. The filmmakers were always pleased that the movie is celebrated for both its seriousness and its humor. Viewing and screening requests from individuals and organizations were made after the NYHS screening. The film link is available for rent for a limited time and all inquiries should be sent to InOurHeadsfilm@gmail.com .

Anu Prestonia brought up a series on Black hair that is streaming now.
“As you guys may know, there’s a six-part series that’s out now by the OWN network,” said Prestonia. “I was supposed to be a part of that, but some things happened and I’m not. But I encourage people to look at it. The experience that Oprah Winfrey had of losing her hair because of a perm, I had that same experience at 10 years old! It had such an indelible impact on me that I ended up in the hair industry… But it took decades for it to come around for me to see how it had really impacted me.”

Designer Khalea Washington was the first person on the mic for the Q&A, and like others, she shared a story. While growing up she looked just like her father, who was strongly opposed when she changed her hair and clothing. But her family was watching The Phil Donahue Show when Winnie Mandela accompanied her husband to New York City.

“They had on all of this beautiful African regalia,” she recalled. And my father said, ‘Wow, look at all of those Africans!’ And I said, “Daddy, most of those people are from New York and New Jersey. We’re wearing our hair and our clothes naturally to honor her.” And my father dropped his head and said, ‘I’m an African!’ He got it! But it’s because of the contributions that you guys made in the trenches that allowed all of us to eventually grow and evolve into what we’ve become.”

Nana Ama Tanks, one of the Grandassa Models present, felt that last week’s event had a significant impact.
“The Grandassa Models Present: In Our Heads was enthusiastically embraced by a mostly Black audience who themselves bore the psychological and emotional battlescars of daring to be their natural selves in a racist America.”

Tanks also expressed condolences to the family of artist Bob Gumbs, who recently passed. He was an AJASS founder and the designer of the iconic “Black Is Beautiful” poster with Kwame’s photographs. Gumbs commented on an article in the March 10th issue of Our Time Press in a piece on the Grandassa Models.

Anu Prestonia told the people in the seats, “I’m so happy that we are at the stage now in our lives and our development where we realize our beauty and our inner beauty, and we realize that the way God made us is the way we’re supposed to be. We don’t need to emulate other cultures and other people in order to be beautiful. So this is a celebration of all of that.”
at the
Our Time Press Shop