Gone But Not Forgotten: 5 Eye-Opening Facts About the Legendary Hank Aaron
Advertisement 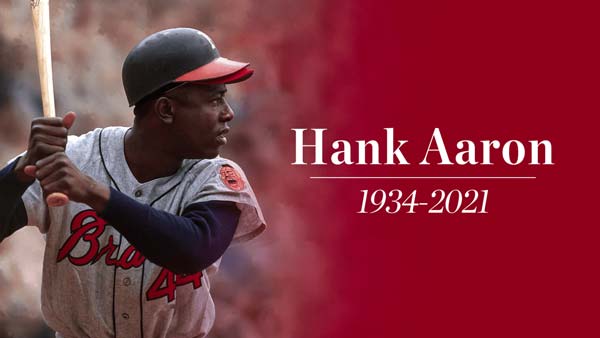 By Victor Trammell, www.yourblackworld.com
The monumental Sports Illustrated Magazine is one of the many news sources in the world of athletics, which covered the Friday morning (January 22) death of Hall of Fame baseball legend Henry “Hank” Aaron.

Though the officially-confirmed cause of Aaron’s death at the age of 86 remains unclear, independent and conglomerate-backed media sources have heralded Aaron’s extraordinary life. His contributions to the sport of baseball’s record books put him in a class of his own on the field.

However, Aaron’s towering legacy as an icon of American history was augmented by the experiences he lived through and roles he assumed in society off the field.
Below are five truths about “Hammerin’ Hank,” the Home Run King, which solidified him as a true American hero.

He recently teamed up with civil rights leaders to help them with their public COVID-19 vaccination PR campaigns.
Since he started earning an above-average salary in America as a player in Major League Baseball, Aaron never hesitated to use his financial freedom or good faith influence to assist his fellow U.S. citizens in need. His most recent community outreach activity raised awareness during the nation’s current public health crisis.
“Whenever Michelle and I spent time with Hank and his wife Billye, we were struck by their kindness, generosity, and grace—and were reminded that we stood on the shoulders of a previous generation of trailblazers,” said former U.S. President Barack Obama in a Friday afternoon (January 22) Facebook update.
“And for the rest of his life, he never missed an opportunity to lead—including earlier this month, when Hank and Billye joined civil rights leaders and got COVID vaccines,” Obama continued.

Off the field during the Civil Rights Movement, Aaron quietly made contributions on behalf of his people in Atlanta, Georgia.
According to a Washington Post column, which commemorated Aaron’s lifetime achievements, writers Dave Sheinin and Matt Schudel profiled the Hall of Famer’s courageous off-the-field path toward the frontlines of America’s most dangerous settings where white-on-black violence claimed lives and terrorized entire communities.
“After he reached the major leagues in Milwaukee in 1954, Mr. Aaron quietly allied himself with the burgeoning civil rights movement. He campaigned for then-Sen. John F. Kennedy (D-Mass.) in Milwaukee in 1960 and was credited with helping the Democratic candidate win the Wisconsin presidential primary,” reads the Post’s report.
“In 1966, at the height of the civil rights movement, the [Milwaukee] Braves moved to Atlanta, worrying Mr. Aaron,” the Post report reads.
“I have lived in the South, and I don’t want to live there again,” he said. “We can go anywhere in Milwaukee. I don’t know what would happen in Atlanta,” the Post quoted Aaron as saying.
According to the U.S. Postal Service, no U.S. dignitary living in America during the year 1972 received more mail that Hank Aaron – but he probably was not very happy about what was delivered.
In its special obituary article for Aaron, the Post also reported on claims made by the U.S. Postal Service in the early 1970s.
“Since 1972, the U.S. Postal Service noted at the time, Mr. Aaron had received more mail than anyone who was not a political figure. Much of it was filled with racism and vile language,” reads the Post’s article.
“Some of the contents were released to the public. ‘If you come close to Babe Ruth’s 714 homers,’ one letter said, ‘I have a contract out on you. Over 700, and you can consider yourself punctured with a .22 shell.’ Another read, ‘My gun is watching your every black move.’” the Post columnists wrote.
This was a testament to the able danger that faced Aaron every day of his life during his time as a superstar black athlete.

Aaron wrote a best-selling book about his exemplary life as an high-profile citizen.
In 1991, Aaron’s riveting autobiography was released titled I Had a Hammer. He talks candidly in the book about the severe danger he was in after breaking former baseball legend Babe Ruth’s record for career home runs.
Dixieland’s anger over Aaron’s transcendental dominance as a black man who conquered a white man’s sport overwhelmed him.
“The Ruth chase should have been the greatest period of my life, and it was the worst,” Aaron wrote.
“I couldn’t believe there was so much hatred in people. It’s something I’m still trying to get over, and maybe I never will,” he added.

Hank Aaron received highly-coveted national accolades from two consecutive U.S. presidents.
In the year 2000, former U.S. President Bill Clinton presented Aaron with the Presidential Citizens Medal for what Clinton called his “exemplary service to the nation.” He went on to receive the Presidential Medal of Freedom from former U.S. President George W. Bush in 2001.
In his book, Aaron reflected on his sense of historical duty.
“I feel it’s my task to carry on where Jackie Robinson left off, and I only know one way to go about it,” he wrote.