“Generals don’t lead from the back”
Advertisement 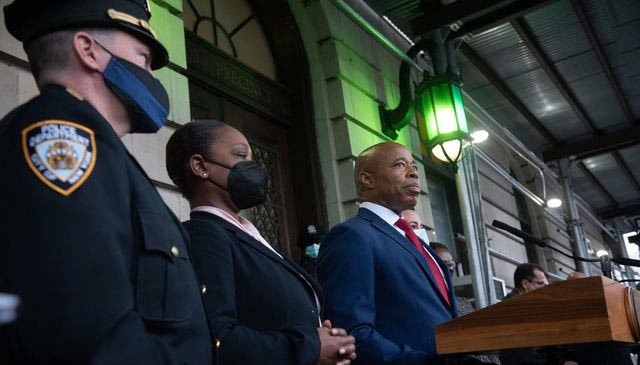 This article appeared originally in The Guardian

Eric Adams’s first two days in office would resonate with any weary New York commuter: a subway ride featuring a brawl requiring the attendance of police, then the challenge of negotiating Manhattan traffic on a rented bike.
“This is an amazing city,” the new mayor told ABC on Sunday. “You know, riding a city bike in, taking the train in, interacting with New Yorkers: generals don’t lead their troops from the back.
“They lead their troops from the front. I’m going to lead my city into this victory from the front. And people tell me this is a difficult job. Darn it, I want it to be a difficult job.”

Significant challenges await the newly sworn-in leader of the most populous US city, a Democrat who trounced the Guardian Angels founder Curtis Sliwa in November to become New York’s second Black mayor after David Dinkins, who was in office from 1990 to 1993.
“New York can and should be the center of the universe again,” said Adams in an inaugural address themed largely around getting to grips with an Omicron-fueled coronavirus surge that has slowed parts of the city to a crawl.
The police and fire departments are reporting sickness rates of around 20% and three subway lines have been suspended because of staff shortages.
Adams succeeds as mayor Bill de Blasio, another Democrat who despite becoming hugely unpopular has signalled a run for governor.
The city, the new mayor said, had endured “two years of continuous crisis, and that insults our very nature as New Yorkers”.

On Saturday, hours after his midnight swearing-in ceremony in Times Square, the 61-year-old rode the subway to work, greeting residents and calling 911 to report a brawl between three men.
By the time officers arrived, the fight – witnessed by reporters accompanying the mayor – was over. Adams, a cop himself for 22 years, said he wished police had stuck around longer.
On Sunday he was up early again, cycling to City Hall and an appearance on ABC’s This Week in which he called on New Yorkers to get vaccinated and boosted.
“It’s going to prevent you from dying,” he said. “It’s going to alleviate the possibility of you being hospitalised and going on a ventilator.

“To those who are not vaccinated: ‘Stop it. It’s time to get vaccinated. It’s time to have the booster shots. You’re endangering yourself and you’re endangering the public and your family as well’.”
Adams, who is keeping de Blasio’s vaccine mandate for private employers, said consideration of a booster mandate for city employees including cops, firefighters and sanitation workers was “our next move and decision”.
His host, George Stephanopoulos, challenged Adams on his campaign pledge to tackle soaring crime rates, especially gun violence.