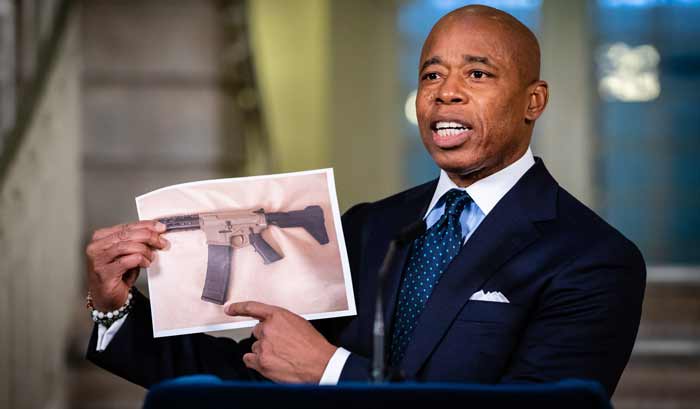 (From a CNN interview Tuesday, January 15, 2022)
On Plain clothed Response Units on the Street
The message I’m sending to New Yorkers and America is that we’re dealing with a sea of violence and there are many rivers that are feeding that sea. One of them is using the proper police tactics that build on that aspect of it.
I know how unfair and abusive that unit was because I testified in federal court, and the judge’s ruling acknowledged my testimony, New York City vs Floyd, to rule against the behavior and practices of the police department. Using that knowledge, we’re going to reinstitute an antigun unit, where police officers will have a modified version of police uniform apparel, they’re going to be better trained, we’re going to use technologies, with cameras to video every interaction. And I’m going to make sure the right officers are assigned there with precision policing, to go after those who are in dangerous gangs and carrying guns in my city.

On Police Withdrawal from the Community
“That’s a river we must deal with. We must deal with the city, and cities, where we’re telling police officers that people can walk in stores, steal items off the shelves and no one is going to prosecute them. When you can do fare evasion in the city and no one is going to prosecute. When you can pour water over the head of a police officer and the person who did that is not going to be held accountable for that
So we ask officer to do their job. Officers are doing their job. We removed 6,000 guns of the streets in the City of New York last year and over 300 since I’ve taken office. We’re asking them to do their job, but let’s look at the other aspects of public safety. Mental health, prosecutors, laws. We must make sure we don’t put dangerous people back on the streets and continue the flow of guns into our cities.
I’m going to get my cops to do their job, I need [those in] the rest of the country in positions of authority to do their job.

On Manhattan District Attorney Alvin Bragg’s proposal not to prosecute small robberies, fare evasion, etc.
“The DA has his job to do, and he has the authority. I don’t have the authority to tell him how to do his job. What I will do is have conversations with him, like I’ve had, and we’re going to partner together to deal with violence in our city. And my job is to do exactly what we’re doing now. Show the public and those who are a part of this apparatus, how do we dam all those rivers that are feeding the sea of violence.

On How Police Officers Reconcile Manhattan DA’s message and the Mayor’s
The Nye York City police department is made up of professionals. We saw two professional officers, officer Mora and Rivera, walk inside a room and were shot, targeted to be shot at. I know how well officers do their job, and they will continue to do so. I tell my officers all the time, don’t be caught up with social media, don’t be caught up in the politics, stay focused on keeping New York City safe, and they’re doing that. We are doing our job and they’re going to continue to do their job and they’re going to have a mayor that is going to give them the support, resources, and equipment to keep New York City safe.

“Generals don’t lead from the back”