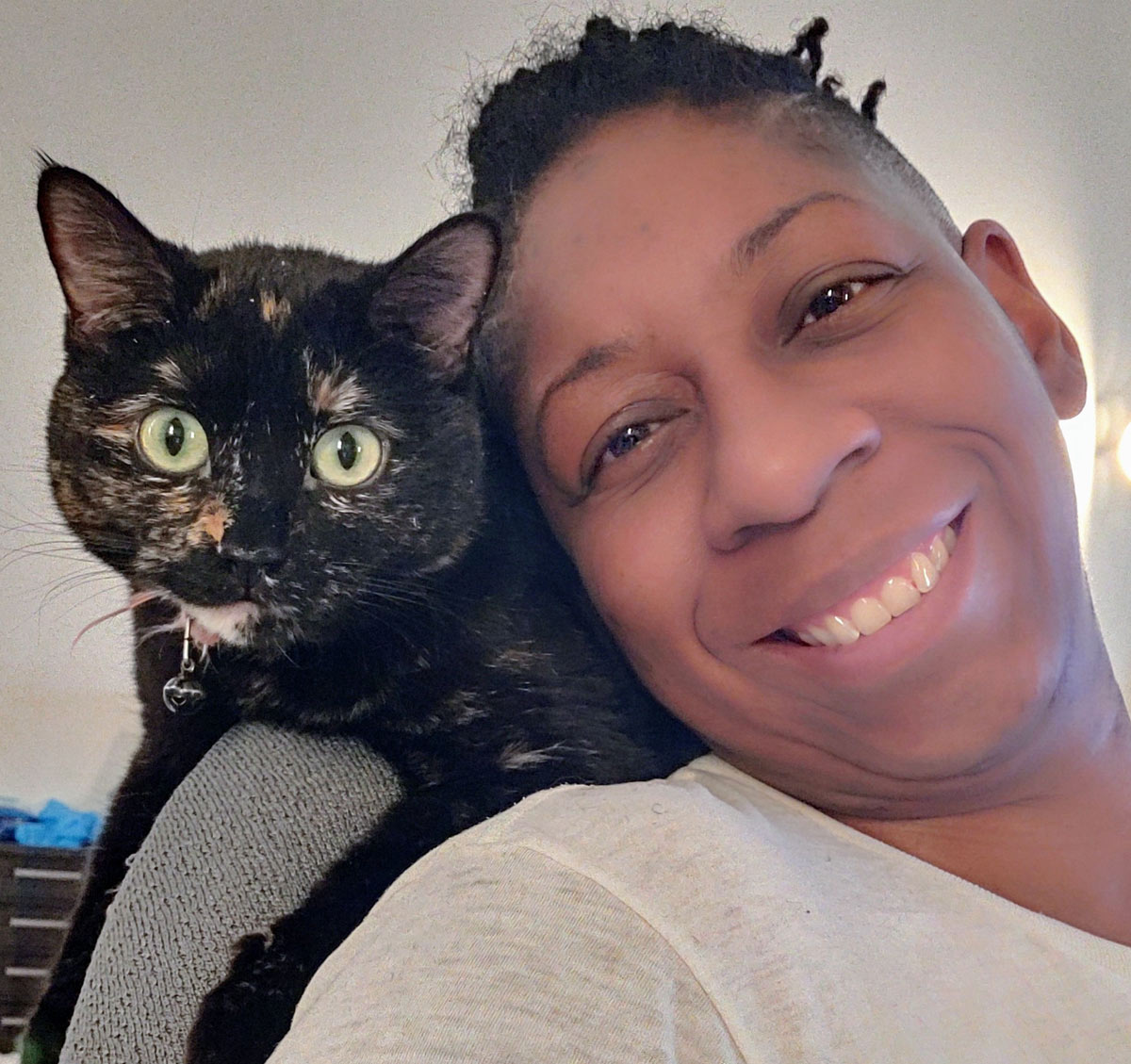 Would-be vet Shontez poses in a selfie with Stardust, her last cat companion. She adopted cats through the years, and said she could communicate with them.

Brooklyn Homage to a Leo Woman

by Joanna “Jo-Jo” Williams
Shontez Denise Morris was my schoolmate at Boys & Girls H.S. (1992-1996) and maid of honor at my wedding. She introduced me to my husband, was spiritual nurturer to my two children and kept me mindful through 30 years of friendship, starting from P.S./I.S. 308 magnate school on Quincy Street in the 7th and 8th grades. She always kept a journal and was a gifted creative writer.

We were awkward, skinny, nerdy girls, bullied and teased, and we had a lot in common.
I could not have imagined back when we were teens that my shy, gifted friend — an honor roll student with a penchant for musing and dreaming; a love for science and the highest regard for animals and creatures, large and small — would evolve into the promise of her Leo sign: regal, queenly, royal, tenacious, and fierce.

I could not imagine that a generation later, she would be a lioness owning her center, her space. She knocked away obstacles that that got in her way. As a corrections officer she never used her weapon. Instead, she said she relied on Truth and Respect as her armor.

Once Shontez came into her own, her heart grew bigger, and her soul stronger, giving her the courage to exercise her gifts as an artist in Santa Fe, New Mexico where she explored life-long interests: public speaking, interior designing, curating art shows, producing events, and impressing all with her talent for making cartoon voices and animal sounds. My sister who I affectionately called Cat sister (we shared a love for cats), could have been a voice-over artist or stand-up comedian. She had the gift to make people smile and laugh.

Shontez was born on a U.S. military base in Stuttgart, Germany, August 15,1978. She and her brother, Andrew Morris Jr, were later raised on Chauncey Street and Malcolm X. Blvd in Brooklyn by single mom Anita Morris Bennett.

“Shonie”, as her mom nicknamed her, credits her grandparents for supporting her interests in community activism and humanitarianism.
I am not yet capable of articulating the depth of my gratitude to her for how much of herself she gave to me and to others. She was always the counselor, always the volunteer, always the worker.

Taz retired early from corrections after 11 years to pursue a different path. She moved to Atlanta for a brief time and then to Sante Fe, New Mexico to pursue her true passion as a painter and visual artist, and then entrepreneur, transforming her correction officer training into a lucrative security business. She only had one friend when she arrived, but soon after the entire Santa Fe community of creative artists came to know her.

My friend was in a life-long search for her center and became THE center of a southwestern arts & culture community. She was phenomenal. I am so glad to have known her. Her tenacious spirit and positive light will be missed.

A memorial is set for next week, Tuesday, March 29 in Santa Fe, NM. It will be livestreamed on Facebook: https://www.facebook.com/events/674679190313508
Here in Brooklyn, preliminary plans are for a celebration of her life in the near future. Event updates can be found on www.ourtimepress.com. To hear Shontez tell her story, visit:
“Portrait of Taz” on
www.ourtimepress.com
youtu.be/od6ZdRhSegw
YouTube: Shontez Morris Tells Her
Story: youtu.be/-lTKwcQQG2I