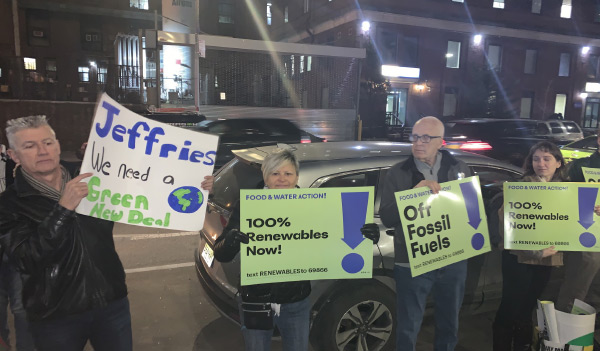 The line to enter the gymnasium of Long Island University’s campus in Downtown Brooklyn was long and winding, as constituents from across the 8th District arrived by the dozens to hear Congressman Hakeem Sekou Jeffries speak his vision and direction as part of his State of the District presentation. But while most people were standing on line waiting to get in, there was a group of sign-toting advocates content with staying outside of the gym to voice their concerns.

A committee of political action groups and nonprofit organizations convened along Ashland Place Monday evening at the behest of the nonprofit Food and Water Action, to call on the Congressman to take more of a leading role in helping to get legislation passed that would curb the issues and effects surrounding climate change. Among the various groups that came together to magnify the issues were political action groups Sunrise Movement and 350Brooklyn, along with NY Communities for Change. According to one volunteer, “We are a loose affiliation of very like-minded groups. We all have our specific focuses and interest areas, some are non profit, while others are more political action.”

Leading the charge Monday night was Food and Water Action Senior Organizer Eric Weltman. Eric is a writer, organizer and educator based in Brooklyn. Of their presence in front of the Congressman’s State of the District event, Eric says, “We are here with a lot of great allies to send a message to Congressman Jeffries that we need him to be more of a leader on climate change. We just want him to co-sponsor some bills. And, as someone who really could be the next Speaker of the House, we really want him to stake out a leadership position around climate-change issues.”
The list of bills and resolutions set on the flyers being handed out by the group’s volunteers, all fall under the Green New Deal, a package of legislation aimed at addressing climate change and economic inequality. The package is sponsored by popular Representative Alexandria Ocascio-Cortez and Senator Ed Markey of Massachusetts. Eric says, “There are some very specific bills that AOC has introduced. One is a Green New Deal for public housing. Obviously there is a lot of public housing in these communities and this bill, if you take a look at it, it’s phenomenal! It makes the buildings more healthy, more green, more liveable, safer. healthier. There are some very specific policies that we are trying to encourage the Congressman to champion.”

Unlike most protests you find outside of political events, the mood of the Food and Watch Action collective was more supportive of Hakeem’s work and potential. As one volunteer put it, “New York City and New York State have always been on the forefront of issues of climate change, but there continues to be apathy on the federal level. Congressman Jeffries has a lot of clout and he could really be a big help if he used his voice in this way.”

“Hold On… Change Is Coming”