“Hold On… Change Is Coming”
Advertisement 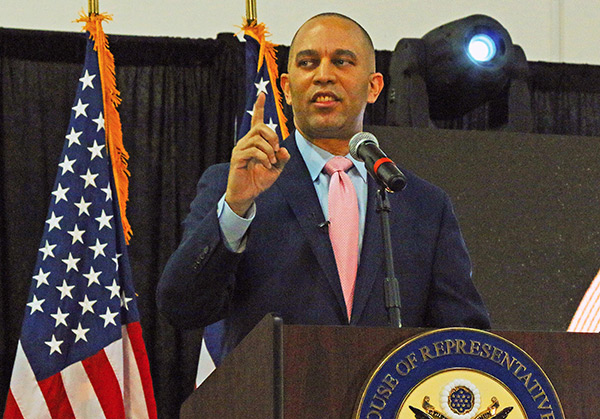 Jeffries thanked everyone for being in attendance including one of his sons (the other away at college), his wife, parents, staff and the spiritual leadership he receives from members of his community.
“In 2017 against all odds, when the Republicans controlled the House, the Senate and the presidency, we stopped Donald Trump from repealing the Affordable Care Act that protected more than 100 million Americans,” said Jeffries, noting how a year later in the 2018 midterm elections, Democrats were able to pick up more than 40 seats in order to regain control of the House.

“In the beginning of 2019, we forced Donald Trump to reopen the government and we didn’t give him a dime to do it. In early 2020, we used our constitutional responsibility and impeached Donald Trump for his corrupt abuse of power,” Jeffries said.

Jeffries informed the crowd mostly filled with seniors about the medication pricing corruption that plagues the country sharing that unlike other countries, the federal government is prohibited under law to negotiate lower drug prices on our behalf.

“House Democrats have advanced legislation to help with the rising costs of prescription drugs. One of which limits the amount that drug companies can charge and eliminate the Pay for Delay deals that exists,” he said.
After each mention of the various issues that currently exist in the country, the Congressman continued to reinvigorate the crowd under the repeated theme “Hold on…. change is coming”.

Jeffries also touched on the issue of gentrification, saying that it has displaced many longtime residents due to overdevelopment and the rise in the cost of living in Brooklyn.

“It’s true, in some places broken glass and crack viles have been replaced by bike lanes and sidewalk cafes, but individuals who helped turn those situations around and transform neighborhoods should not be victims of their own success. If you were here during the rough times, you should be here to experience the good times,” said Jeffries.

Environmental Groups Come Together to Urge Jeffries to Go Green