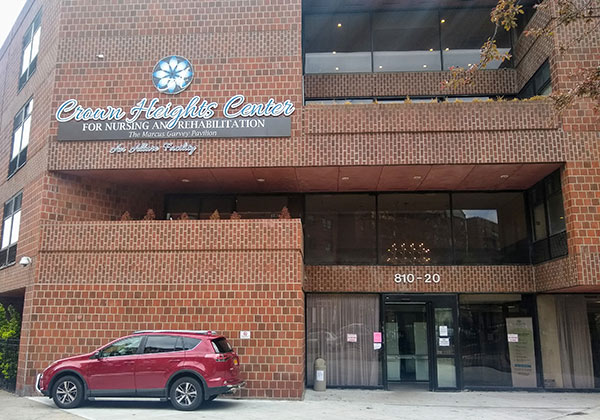 By Ariama Long and
Stephen Witt, Kings County Politics
The corpses of eight elderly people were reportedly left for days in a nursing home on the Bedford-Stuyvesant/Northern Crown Heights border before the city finally picked them up yesterday, according to local Bed-Stuy sources.
KCP received calls from several reputable neighborhood sources about the dead being left to decompose – including two since last week – at the Crown Heights Center for Nursing and Rehabilitation (CHC), 810 St. Marks Avenue.
Neither the City’s Office of the Chief Medical Examiner (OCME) or the State Department of Health, which oversees nursing homes, returned emails or phone calls at post time to confirm or deny that the bodies were left at the facility for such a length of time.
Longtime civic activist and assembly candidate Stefani Zinerman received texts and calls from workers at the facility requesting her assistance to get the bodies removed as several had been left in their rooms and the workers were resorting to pouring bleach on the floor to cover the stench.
The workers also told Zinerman they were concerned about their health because of a lack of personal protective equipment (PPE)
Zinerman said she immediately contacted Mayor Bill de Blasio’s office as well as State Sen. Velmanette Montgomery and U.S. Rep. Hakeem Jeffries. The mayor’s office responded with a text that funeral directors were coming to pick up three of the bodies, which they did on Wednesday, Zinerman said.
Two other longtime Central Brooklyn community activists said they were working with the OCME as of this post to get the other five bodies removed.
Funeral homes, crematories, city morgues, hospitals, and nursing homes have been hit particularly hard by the influx of COVID-19 patients or outbreak-related deaths.
“All nursing homes, they’ve had to accept COVID-19 patients from hospital partners,” said David Simpson, a spokesperson for the Allure Group, which is the company that owns CHC, a large brick building with a bed capacity of 295 and over 300 employees, on 810 Saint Marks Avenue.
Simpson did not confirm or deny the bodies being left at the facility for any length of time, but did acknowledge that CHC is a hospice and has an incredibly vulnerable population, especially with COVID-19.
“What’s happening inside is that we don’t have enough space to isolate everyone,” he said, about how live-in residents or patients in the center were being treated. “Typically they have roommates. If they’re suspected of having COVID-19 because of the symptoms, if patients or residents are experiencing symptoms, even without the test, or [are] confirmed cases, [they] are being isolated.”
Essentially, the center was adhering to the governor’s executive orders in isolating patients, eliminating visiting, and taking precautions, like checking staff’s temperatures at the only point of entry at the front door.
Not everyone is happy with these circumstances.

Dr. Gerry and Audrey Baker, identical twin sisters right down to their matching hairstyles, outfits, and cream-colored cars, are palpably worried about their 105-year-old mother, Grace Marie Baker, who has been in CHC’s care since November 2014.
“They’ll call us troublemakers because we’re advocates for our mother,” said A. Baker, of some of the staff at CHC. She openly said that she and her sister have had “cultural clashes” whenever they inquired about their mother’s care. They complained about the lack of communication since the crisis began.
In a complaint letter, on March 31, they emailed the previous CHC Administrator Kevin Carey, claiming the “forced isolation” was “cruel, abusive, and negligent to a person of her age.”
Carey said in his correspondence back, on April 2, that CHC was following the guidelines set by the New York State Department of Health in regards to visits and communications.
“It’s a tough time for them,” said Simpson, who insisted that they keep regular communications with the families of patients and residents during these challenging times. “For some families that’s enough.”
The incident comes as recently released City data indicates that Black and Hispanic neighborhoods are suffering disproportionately higher rates of catching coronavirus and of COVID-related deaths.
According to this data, Hispanic coronavirus victims make up 34% of all fatalities while comprising 29% of the city’s population of 8.4 million people. Black residents account for 28% of the city’s deaths, while making up 22% of the population.
Zinerman said a part of the problem is that the OCME, funeral homes and EMT personnel is being strained to the maximum.
“We were not prepared for this. Someone died in their house and it took 12 hours to pick them up. People are dying in their houses because they think it’s safer to be home than hospitals. We need more emergency personnel and refrigerator trucks,” said Zinerman.