Discovering the Myth and Folklore of Black Mermaids
Advertisement 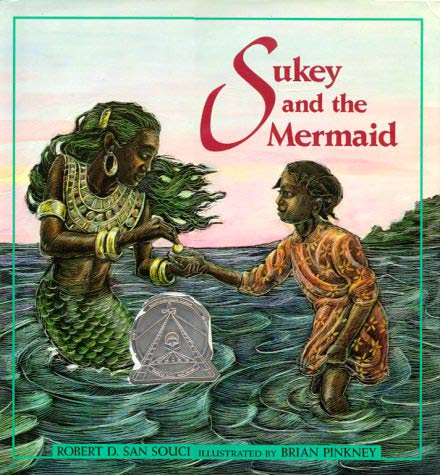 By Fern Gillespie
Halle Bailey’s face was on the screen, swimming through the corals for mere seconds. That was all that was needed to elicit viral giggles and amazement from little Black girls. They saw a mystical, magical, beautiful young Black woman who was a mermaid.

Yet, Disney’s upcoming 2023 release of the live-action version of the animated classic The Little Mermaid, of course, found controversy with the CRT police, who disregard the thought of Black mermaids and prefer only the existence of Hans Christian Anderson’s Danish tale.
Mythological and folklore tales of Black mermaids date back hundreds of years in Africa, the Caribbean, and some gulf communities in the US. Literary education and sociocultural scholars Dr. Desiree Cueto and Dr. Dorea Kleker at the University of Arizona recently wrote a historical overview of Black mermaids for the web literary journal Worlds of Words. On the site, the educators recommend 12 fiction young adult and children’s books about Black mermaids.

According to their feature in World of Words, the mermaid is a prominent figure in stories told across different African nations. The half human/half fish water spirit is referred to by other names depending on the specific African nation and unique cultures.

For example, Mami Wata is a deity whose story is told throughout different parts of West Africa. She is known for bestowing wealth and power as well as destruction. A similar figure, called Yemoja, is known to the Yoruba people of Nigeria to be a giver of life, and La Sirene is a Haitian spirit of the sea.

Over time, the oral stories of mermaids and sirens have been written and published throughout the world and have become the inspiration for several recent picture books and novels.

Our Time Press spoke with Dr. Cueto, Associate Professor, Teaching, Learning & Sociocultural Studies at Arizona State, about her research on Black mermaid folklore and mythology. “I don’t even understand the controversy. That blows my mind. We have always had Black mermaids, and they go back in African mythology since before the time of slavery, she said. “Mami Wata was the deity who traveled with the slaves along their path through the Middle Passage.”

Dr. Cueto’s father is African American, and her mother’s family is from the Cape Verde Islands. They were Cape Verde whalers for generations. “I just started doing some research around that,” she said. “Part of what I’m working on now is finding that part of my heritage with some of the oral stories around mermaids. Also, uncovering oral traditions around mermaids. Unfortunately, there’s not a lot written.”

Dr. Cueto has found some mermaid tales in the Black New Orleans and the Gullah culture. “Throughout history, we found ways to reclaim the water or think about the water differently,” she explained. “Mermaid stories are one of those stories that invited us back to think about ourselves and that space.”