COVID-19:We Weren’t Ready for This, Will We Be Ready for What Comes Next?
Advertisement 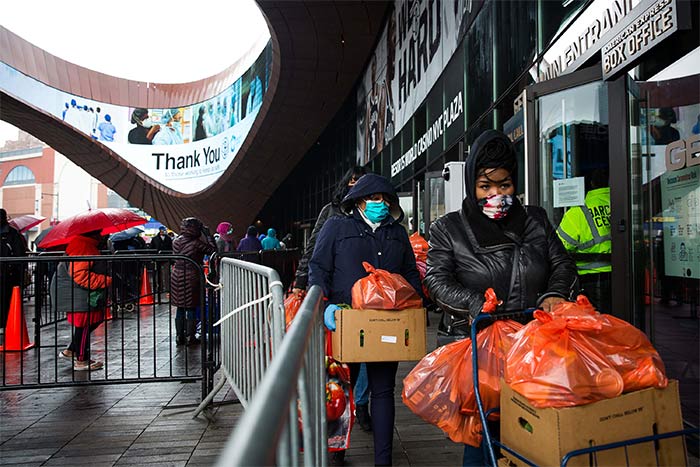 Above image:People pick up food at a food bank distribution site at the Barclay’s Center in Brooklyn on April 24, 2020. More than 60,000 people have died of COVID-19 in the United States while debates are heightening over reopening the country’s economy, severely battered by the virus. Over a million cases have been reported in the United States according to the Center for Systems Science and Engineering (CSSE) at Johns Hopkins University. (Photo by Michael NagleXinhua) (Credit Image: © Xinhua via ZUMA Wire)

The coronavirus pandemic has laid bare and made plain the racism and plantation-owner attitude that has always been at the foundation of the nation. Many have commented on how the legacy of racism, in all its aspects, was magnified and brought into sudden relief by the health disparities in outcomes for Black and Brown people.

And now the press to reopen around the country has exposed the consciousness of what historian W.E.B. DuBois called the “Planter” — those plantation owners who wanted the crops, no matter the human cost. And that’s what we’re seeing today. The Hispanics, descendants of those from whom the land of the western hemisphere was stolen, and the African Americans, descendants of those whose labor was stolen to work that land, were exploited then, and they are exploited now. 400 years and the dynamic has not changed.

We see it in the white Republican governors of Georgia and Texas, forging ahead to open up businesses and venues, and the Black mayors of Atlanta and Houston leading the chorus of mayors saying no. Too soon. People will die.

The majority of working white folks, those who interact with people, they don’t want to open up either. You can wonder if it were the rich dying at a greater percentage than their population, would the Republican rush to open America be as furious as it is now?

Cashiers, clerks, workers in slaughterhouses, men and women with rough hands, they see they’re not of the Planter class, and therefore are expendable, with lives of lesser value. And that could be one of the world-changing lessons learned at this horrible price. And it had to be taught by the teacher from hell, Donald Trump.

Trump just said today that social distancing was a problem for restaurants and that, “We want it to be the way it was.” The man is a simpleton. Most people know it will not be the way it was, not until a vaccine is given to hundreds of millions of people will it even be close. Hopefully before the 2021 flu season. Dr. Anthony Fauci, Director of the National Institute of Allergy and Infectious Diseases sees hope in the antiviral drug remdesivir, which showed “quite good news” as a therapeutic to shorten the recovery time of the virus and perhaps lower the mortality rate as well.

It seems like only a few weeks ago when I saw the number of deaths in the country ticking over the 300 mark. Today it passed 60,000. More than were killed in the Vietnam War. Another 33,000 and the total will include the Korean War as well. And history will record it was Trump who did the killing.