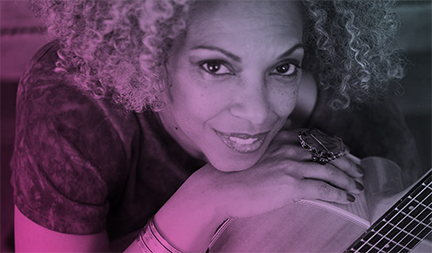 The Robeson Effect Teachers College, Columbia University, W. 120th St., Manhattan, 7pm, $16. The East Coast Premier of this captivating film features actors Danny Glover and Ben Guillory, who have been friends for over 50 years. They share with the audience the extraordinary story of that friendship, some of their life’s journey and their shared admiration of Paul Robeson, which led them to the creation of the Robey Theater Company in Los Angeles. Tickets at nyadiff.org.

Brave Brown Sisters from the Front Lines Sistas’ Place, 456 Nostrand Ave., 9 &10:30pm, $20 in adv., $25 at door. Grammy-nominated spoken word performance artist Gh’ail Rhodes Benjamin with bassist Binky Brice presents a collage of monologues and music from the voices of Ella Baker, Winnie Mandela, Miriam Makeba, Ida B. Wells and Fannie Lou Hamer. The Sistas’ Place series of concerts for Women’s History Month opens with this dynamic presentation incorporating a glimpse of all the women being celebrated this month. Reservations at 718-398-1766.

AV Pizza & Book Party African Voices Communications, 270 W. 96th St., Manhattan, 2-6pm, FREE. African Voices is asking friends and family to volunteer to assist in packing up and organizing its magazines to move! They’re hosting an old-fashioned pizza and book party with other refreshments. AV is also selling books from $5 to $10. Anyone who makes a donation of $5 or more will leave with a book of his/her choice.

Nzinga Queen of Angola Teachers College, Columbia University, W. 120th St., Manhattan, 6pm, $16. This narrative feature film is set in 17th century Angola, where a woman leads her kingdom in a long struggle for independence. After witnessing the murder of her son and watching her people being humiliated by Portuguese colonizers, Nzinga will become a queen and struggle for their liberation, embodying the motto: “Those who stay fight to win.” Tickets and the full ADIFF spring screening schedule at nyadiff.org.

The New Civil Rights Movement: Undocumented, Black and Unafraid Brooklyn Historical Society, 128 Pierrepont St., 6:30-8pm, $10. Join Cristina Jiménez and Rashad Robinson, two rising stars of the progressive movement, and Heather Booth, lifelong strategist and veteran of the Mississippi Freedom Summer Project, for an intimate conversation about building the next generation of progressive power.
Drawing on decades of experience, this intergenerational group will share about how they have been able to shift harmful narratives, hold corporations and politicians accountable, and reflect on how we can organize to win in this critical moment.

50in50: Letters to Our Daughters Kumble Theater, 1 University Plaza, 3pm & 7pm, $25. This third annual beloved theatrical event features a new group of 50 women writers who “consider both the world they inherited and the one they’d like to create.” Their words will be brought to life on stage by this year’s group of powerhouse actors from Broadway, film and TV. They are: Marsha Stephanie Blake, Ebony Jo-Ann, Jasmine Cephas Jones, LaChanze, Terria Joseph, Celestine Rae, Angelica Ross, Michele Shay, Phyllis Yvonne Stickney and Pauletta Washington. The performance is directed by Indira Etwaroo with a curatorial statement by MacArthur “Genius” Dominique Morisseau and live music by Maritri Garrett. Tickets at Eventbrite.

Maya Angelou: And Still I Rise Central Library, 10 Grand Army Plaza, 8-10pm, FREE. See the first feature documentary on the singer, dancer, poet, writer and activist who inspired generations with modern African-American thought that pushed boundaries. Best known for her autobiography, I Know Why the Caged Bird Sings, Maya Angelou (1928-2014) also blazed a brave and original life as a performer, giving people the freedom to think about their history in a way they never had before. With unprecedented access, the film traces her incredible journey, shedding light on the untold aspects of her life through never-before-seen footage, rare archival photographs and videos in her own words.