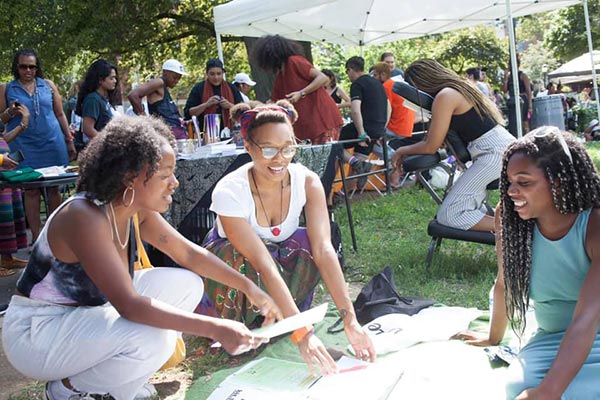 The Food Coop is Off and Running

A new and Black-led food cooperative offering fresh produce, healthy grocery items and other nutritive fare will open next year, serving Bedford-Stuyvesant and Crown Heights. It’s been a long time coming but judging from the jubilation of its organizers and the enthusiastic reception of area residents, it was worth the wait. And people from outside the neighborhood are welcome as well (Some longtime Brooklyn residents will recall that, although the Central Brooklyn Food Coop is being reported in several news media outlets as the first Black-owned initiative of its kind, that’s actually not the case. In the 1970s The East organization ran Kununuana, a food coop  selling groceries and produce on Fulton Street at the corner of Claver Place).

The Coop has raised close to $35,000 on Kickstarter, meeting its first step goal of $25,000 in only six days.  They plan to use those donations to rent a Fulton Street storefront.  The campaign ends at midnight on November 22nd and if the $100,000 target is reached, the organizers will be able to cover the expenses for renovating and outfitting their new place, complete with a kitchen for cooking classes and other offerings.

“Yes, the Coop is meant to have an impact on a particular community, but anyone from anywhere can join,” said Mark Winston Griffith, founder and director of the Brooklyn Movement Center (BMC) and a founding member of the Central Brooklyn Food Coop (CBFC).

“The CBFC is one of the bedrock campaigns of the Brooklyn Movement Center,” said Winston Griffith. “So this a huge shot in the arm!”

It takes a long time to get something so critical and comprehensive up and running. But Winston Griffith is a long longtime community activist and organizer with patience and perspective. He’s learned the value of incremental steps; delays, setbacks and rethinking are to be expected and can serve the purpose of creating a tested and resilient team.

Because the Coop is the brainchild and passion project of the BMC, Coop board members will be working along with it to rebuild an affordable and sustainable local food economy. But the Coop will also operate independently, with its work connected to the broader objectives of its communities and establishing beneficial and viable partnerships with like-minded sources and resources.

The CBFC is already benefitting from its existing collaborations working with RiseBoro Community Partnerships and Brooklyn Packers. Its buying club has supported local farmers and bakeries, etc. many of which are Black-owned businesses.

As gentrification continues in Bedford Stuyvesant and Crown Heights, many people whose families have been there for generations are not able to – or do not choose to – patronize the high-end supermarkets and twee coffeehouses. But their patronage is critical to those small business trying to remain in the black.

“We [at BMC] are a community organization trying to change policies and practices,” said Winston Griffith, “but we can’t do that without building an institution that delivers tangible benefits and meets people where they are in terms of their needs. In this case, we’re literally going to feed them and put some money in their pockets.”

Ina Solomon has been with the CBFC since 2014. She is now on the Board of Directors and co-chair of the Coop’s Business and Strategy Committee. A longtime Park Slope Food Coop member, she was delighted when she first learned that a healthy food initiative such as the CBFC was coming to her neighborhood. And it will model itself on the PSFC, one of the largest (with 17,000 members) and longest-running coops in the nation. It has remained successful as a member-only cooperative where everyone – with the exception of paid staff – works the same number of hours per month and low-income members get a break on initial fees and membership dues.

Ina is dedicated and enthusiastic.

“The Business and Strategy committee provides the operational strategy for our work. Some of our projects include writing the business plan, organizing our property search, developing the financial models and projections. We have over 50 invested members in the coop, but our group of supporters is much larger.  That number is a few hundred.  We are aiming to have at least 500 invested members by the time the store opens in 2020.”

She echoes Winston Griffith’s conviction that the CBFC is in the right place at the right time and is poised to make a difference not only for – but with the community.

“We are a mission driven coop that aims to provide healthy food options for the long-term residents of Central Brooklyn,” said Solomon. “We are approaching our work with a deep sense of responsibility, care and love for our community and that takes time.  We want to get it right.

“From the beginning everyone I have spoked to is excited about the project.  Folks are glad to see that we’re still working towards making this happen and that we are even closer to opening the doors. The energy feels pretty good right now.  We are at an exciting stage of our development!”

For information about the Central Brooklyn Food Coop, visit its website at cbfood.org, and to support the fundraising campaign visit its page on Kickstarter.

Why We Should Support the Test Part 3