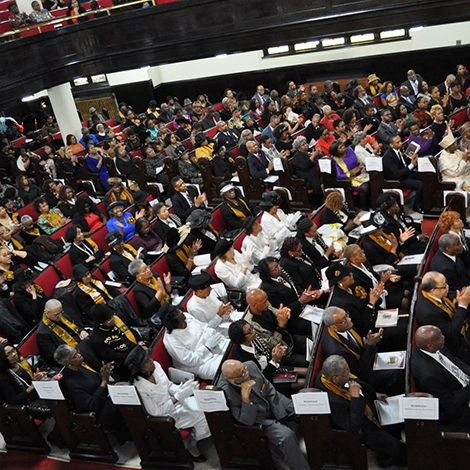 In one glorious day, a church bridges its past to its present, to its future …

When people talk about having their roots in Brooklyn, few have roots deeper than the 250-year-old congregation of Bridge Street AWME Church.  As expected, great moments were experienced at this historic church that, as The Rev. David B. Cousin and guest speaker Rev. Dr. Cornell William Brooks said, “continues to make history”.

The entire day was a sweeping, dramatic evocation of the program’s theme centering on honoring Bridge Street’s two convergent histories: from the AWME ancestral founding entity and its evolvement as Bridge Street African Methodist Episcopal Church.

It was a rousing service of great words, great music and great people coming together to fellowship and celebrate the foundations for great works already in progress.  The church honored the keepers of Bridge Street’s missions and heritage and heard congratulatory words from the leaders in the courtrooms of the city and state, and all levels of government who are charged with fighting for Bridge Street, its neighbors and neighborhood.

Exhilarating performances by Bridge Street musicians and liturgical dancers in white roused the congregation.  A harmonic universal choir robed in black, featuring singers from the church unified with the voices of friends from other church families, hailed the church triumphant.

As the nation’s Black History Month closes, Our Time Press appreciates the action of the pastors, trustees and congregation in inviting such a speaker as The Rev. Dr. Brooks to deliver an impactful sermon that, in itself, was history-making on the level of the great messages and delivery of The Rev. Martin Luther King, Jr.   A transcrip

tion of his entire speech will appear in the March 10 issue of Our Time Press, in celebration of the birthday of Harriet Tubman, who also spoke to Bridge Street congregations before the dawn of the 20th century.

On this page, we offer these brief highlights of this one church so that the community remembers and takes lessons from the perseverance and the determination of those who have made this anniversary celebration possible.

Rev. Charles Griffin received The Founders Award, a new honor, for exemplifying the spirit of the early founders of our church, and who have helped to further the spiritual work and legacy of the church. It is given to a leader age 30 or older. He has served on the ministerial staff for more than 20 years.

Bridge Street, and has active involvement in the community.  Jones, who recently became a firefighter, mentors young men of character at Community School 21.

Spencer Jackson received The Youth Award for demonstrating commitment to the ideals of Bridge Street Church, school and community. Nominees are actively involved in the organized youth activities of the church; participate in school and community activities and service projects; are in good academic standing.

Anne Brunson, longtime Bridge Streeter, was awarded the Church and Community Award recognizing her leadership in setting the example of good Christian values.  She also provides spiritual, cultural, social, educational or business programs which address the needs of the “whole person” in the church and community.  They must also give back to the community by providing

employment and business opportunities, as well as quality services which enhance the community. Ms. Brunson is former President and 2nd Vice President of the New York Con.

or more generations of membership, service and leadership, sustaining the spiritual legacy and work of Bridge Street Church and Community. The oldest generation joined Bridge Street in 1945.  Over the years, various members of the family have been part of the Church School, the Usher Board, Girl Scouts, the Security Ministry, the Junior Steward Board, the Women’s Day Committee, the Arthur L. Funn Lay Organization and the Board of Trustees Conference WMS., among other notable achievements.

1794     The congregation purchased land from wealthy landowner Joshua Sands, and built a small church,
which was named The Sands Street Wesleyan Methodist Episcopal Church. The
congregation consisted of Caucasians, free Negroes, and ex-slaves. The Sands Street congregation
grew rapidly and needed a larger place to worship.

1810     A new church was completed. The church was named First Methodist Episcopal Church of
Brooklyn and had a mixed congregation of fifteen hundred members. Between 1810 and 1817, the
Black church membership increased rapidly causing relations between Blacks and Whites to
deteriorate. Whites wanted Blacks to pay $10 a quarter to worship in the galleries. They withdrew
from the First Methodist Episcopal Church of Brooklyn and temporarily worshipped in each other’s
homes.

1817     On May 14, 1817, they formed a society to raise funds to buy land to build a church, agreeing to pay
50 cents a month into a treasury for a building fund. In the fall of1817, a grand rally was held and the
amount of$130was collected towards the building fund.

1818     On January 12, 1818, after being legally notified, the “male” members of the society met for the
purpose of choosing trustees, whose duties were to take care of the temporal affairs of the church or
religious instruction. A delegation was appointed to go to the Philadelphia to see Bishop
Richard Allen of the AME Church about sending a preacher for the new church and to ordain several of the delegates as local preachers. On January 19, 1818, Peter and Benjamin
Croger went before Magistrate John Garrison in Kings County Court of Common Pleas and filed a
Certificate of Election. On February 7, 1818, the Certificate of Election was approved by the
Court of Common Pleas, and the first African Wesleyan Methodist Episcopal Church was
incorporated in the Village of Brooklyn, State of New York.

1819     OnJuly21, 1819, the church corporation purchased land located on the east side of High Street near
Jay Street, and built the first African Wesleyan Methodist Episcopal Church in Brooklyn.

1824     On February 17, 1824, Peter Croger was elected the first delegate to the General Conference of the
AME Church held in Baltimore, Md.

1827     The men of the AWME Church set up an educational system for colored youngsters. On
September 25, 1827, the cornerstone of The African Free School (known as Colored School # 1)
was laid under the direction of Henry C. Thompson, an AWME Church Trustee.

1862 On December 31, 1862, a historic three-day celebration of freedom took place in Brooklyn.

Hundreds of Brooklyn citizens, black and white, flooded the Bridge Street African Wesleyan
Methodist Episcopal Church to attend the church’s traditional “watch night” service on New Year’s
Eve. Parishioners came in great numbers because President Abraham Lincoln h promised to sign
the Emancipation Proclamation on New Year’s Day. This was the first day of an historic three-day
celebration of freedom at the church.

1863      On January 1, 1863, President Abraham Lincoln signed the Emancipation Proclamation and freed
four million African American men, women, and children. The African Wesleyan Methodist
Episcopal Church (Bridge Street AWME Church) remained open all day as word spread and people
arrived to express their joy, as well as their concern about the ongoing Civil War – in meetings,
speeches, prayers and songs. On January 2, 1863, the church presented a formal program of speakers,
including African-American historian, William Wells Brown and abolitionist Theodore Tilton. In
February 1863, the nation’s leading civil rights activist Frederick Douglas spoke at Bridge Street
AWME Church, delivering a stirring speech on the need for black soldiers in the Union ranks. A few
weeks later, Douglas used the Bridge Street address to launch his historic “Men of Color, To Arms”
campaign, which recruited 200,000 African-American soldiers to the Union cause.

1865      In October 1865, Harriet Tubman, the nation’s most famous conductor on the Underground
Railroad, visited the church. According to The Brooklyn Daily Eagle, she was welcomed by an
immense congregation-half of it whites-and hailed for her heroism as a Union scout and nurse.
At the time, the church organist was Susan Smith McKinney, 18, who was born and raised in
Weeksville. She was an activist in missionary work and the suffragist movement, and became the first
African-American woman to earn a medical degree in New York State. The AWME Church played a
prominent role in the anti-slavery movement as an abolitionist meeting place and a “station” on the
Underground Railroad, hiding freedom seekers in the church basement. Other Brooklyn churches
did the same, including Plymouth Congregational, Siloam Presbyterian and Concord Baptist.

1938      On Sunday, December 4, 1938, the Rev. Mansfield E. Jackson, the fifty-second pastor of the African
Wesleyan Methodist Episcopal Church, marched his congregation from 309 Bridge Street to their
new church home at 277 Stuyvesant Avenue, which was purchased from the Grace Presbyterian
Church. From its pulpit at Sands Street, High Street, Bridge Street and Stuyvesant Avenue, some of
the greatest preachers and orators of the last two centuries have championed social justice causes for
an egalitarian society.

In 1818, a delegation was appointed to go to the Philadelphia to see Bishop Richard Allen of the AME Church
about sending a preacher for the new church and to ordain several of the delegates as local preachers.’ Since
that time, three former pastors were elevated to the episcopacy of the AME Church.