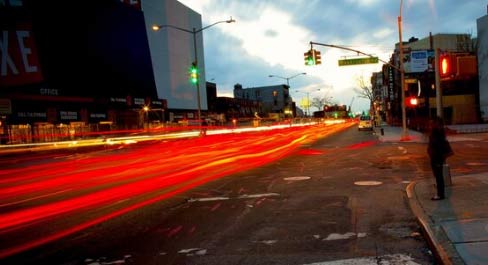 Brooklyn, NY – Today, Brooklyn Borough President Eric Adams joined Transportation Alternatives and Families for Safe Streets, as well as local elected leaders, at the site of a fatal crash in Clinton Hill, where a reckless driver allegedly going the wrong way rammed into another car, causing both to go over the curb and kill a three-month-old baby girl, identified as Apolline Mong-Guillemin. The infant’s mother and a 36-year-old relative were hospitalized and are expected to survive. The driver, who had a history of reckless behavior, with 160 traffic violations since June 2017, including 91 violations for speeding in a school zone, was taken into custody.

Borough President Adams, Transportation Alternatives, and other participants called for a comprehensive re-thinking of street safety in the wake of the crash, which will include expedited redesigns of high-risk corridors by the New York City Department of Transportation (DOT) and legislation at the City and State level to ensure accountability for reckless drivers.

“Just two weeks ago, we mourned Tamy Guahiac, a six-year-old girl killed by a reckless driver in Dyker Heights. Now, we are mourning a baby who was cruelly taken from us by yet another reckless driver. I am tired of the endless stream of vigils. I am tired of trying to comfort parents experiencing the worst grief imaginable. I am tired of seeing families torn apart by the epidemic of traffic violence. Increasing enforcement on reckless driving is important, but that alone will not change driver behavior. We need a holistic re-thinking of our streetscape to stop this carnage, and deter the kind of reckless action we saw on this street the other night. I thank Transportation Alternatives, Families for Safe Streets, and others for their steadfast advocacy on this issue,” said Brooklyn Borough President Eric Adams.

“If a three-month-old baby being pushed in a stroller on the sidewalk by her mother isn’t safe getting around New York City, who is? We are heartbroken and send our deepest condolences to this family and numerous other New Yorkers whose lives were torn apart by traffic violence over this weekend of carnage. 2021 is the deadliest year on our streets since Mayor de Blasio took office, and intersections like Gates and Vanderbilt Avenues — and those all over the city — need concrete redesigns to prevent reckless driving from happening in the first place. New Yorkers don’t need any more statements, empty promises, or go-nowhere task forces. We need immediate action to save lives and we are grateful to stand today with Borough President Eric Adams in demanding immediate action from Mayor de Blasio to restore the promise of Vision Zero,” said Transportation Alternatives Executive Director Danny Harris.

“Living through every parent’s worst nightmare. That’s what it means to live every day without your child. In fall 2013, I was standing on the sidewalk in Clinton Hill with my two sons, Lucian and Theo, just blocks from the site of this weekend’s crash when a reckless driver mowed us down on the sidewalk. Lucian was killed instantly. I could not leave the house for months, and I did not speak at his vigil. But now I am raising my voice because I am sick that more children are being killed by preventable traffic violence. These horrific deaths and injuries are preventable. No more promises. We need action on Vision Zero now,” said Anna Koval, Families for Safe Streets member and mother of nine-year-old Lucian Merryweather, killed by a reckless driver in Clinton Hill in 2013.

“Yet another horrifying, tragic weekend of traffic violence in our city, with at least six deaths, including a baby only three months old,” said State Senator Andrew Gounardes. “I send my deepest condolences to the families and loved ones of the victims. It was just two weeks ago that I attended a vigil for a six-year-old girl who was fatally struck by a vehicle. Two days later another of my constituents was killed. When will this end? We need immediate action from City Hall and we need immediate action from Albany. The time for excuses and the time for delay is long past due.”

Among the steps Borough President Adams, Transportation Alternatives, and others called for to improve street safety were:
Fully funding and immediately accelerating the Dangerous Vehicle Abatement Program implementation
Immediately starting to roll out the Streets Master Plan through quick builds for expanded pedestrian space, protected bike lanes, and dedicated bus lanes, and releasing an accelerated time-frame for permanent infrastructure investment across the five boroughs
Doubling down on Vision Zero and the need to implement proactive changes to our streets as opposed to reactive measures imposed after tragedies
Increasing the budget for DOT to expedite and expand redesigns of dangerous corridors
Demanding the immediate passage of the Crash Victim Rights and Safety Act in Albany, including Sammy’s Law and 24/7 traffic camera enforcement
Adopting Transportation Alternatives’ NYC 25×25 vision, which aims to reclaim 25 percent of streets from cars by 2025 for a safer, healthier, more equitable city
2021 is on pace to be the deadliest year for traffic fatalities since 2013, with 188 New Yorkers killed on city streets to date this year. This past weekend alone, seven people — including Apolline — were killed by drivers throughout the city.

Eric Adams’ Plan for the City