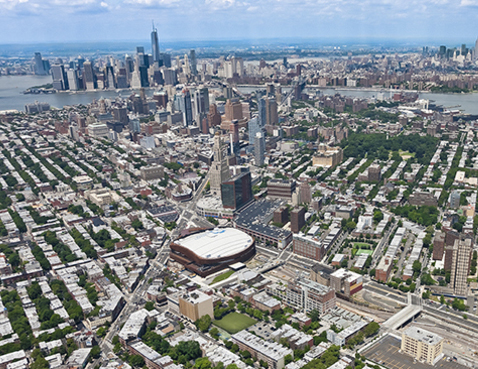 BROOKLYN, NY, February 22, 2016: Today, Brooklyn Borough President Eric L. Adams released “A Decade Later in Downtown Brooklyn”, a report analyzing the impact of the Downtown Brooklyn Plan, a rezoning initiated in 2004 by the Bloomberg Administration. The analysis, which can be accessed at brooklyn-usa.org, shows that the effort, which was intended to reinforce the position of the neighborhood as a regional central business district as well as to strengthen the local job base, has contributed to a dramatic increase in residential rather than commercial development, straining the capacity of currently existing infrastructure. While underscoring the successes of the rezoning, including the billions of dollars in private sector investment that the plan helped leverage, Borough President Adams detailed his recommendations for the city to consider a Zoning Text Amendment that will encourage the development of commercial properties in Downtown Brooklyn, as well as measures that will revisit infrastructure needs in the rezoned area and expand opportunities for developing commercial space and affordable housing in the neighborhood.

“In many ways, the [2004] rezoning was a success…[but] unfortunately, much of the premise for the rezoning has not been met, namely making Downtown Brooklyn a 21st century business and commercial district,” wrote Borough President Adams in his report. “Downtown Brooklyn is bearing a burden of unanticipated new residential development without a comparable level of infrastructure to sustainably support a growing 24-hour community. The gap between what was assumed for the 2004 analysis and what has been developed warrants a fresh look at how to accommodate past and future growth and direct necessary capital budget investment.”

According to Borough President Adams’s review of the Special Downtown Brooklyn Development District’s (SDBD) 2004 Environmental Impact Statement (EIS), the rezoning of Downtown Brooklyn anticipated the construction of 4.6 million square feet of office space, about 850,000 square feet of retail space and approximately 1,000 units of housing by 2014. Yet, despite the recent announcement of a 420,000 square-foot office building at 420 Albee Square and the commitment by the New York City Economic Development Corporation (EDC) to create additional opportunities for companies that want to relocate in the neighborhood, only 1.3 million square feet of commercial property has been developed — 3.3 million square feet less than had been anticipated. There are more than 11,000 units of housing that have been developed or are in the process of development — compared with 979 units of housing that were expected in the Downtown Brooklyn Plan. In addition, 1,700 hotel rooms have been constructed in the neighborhood — 300 more than anticipated.

As a result of increased residential rather than commercial development in the neighborhood, Borough President Adams found the needs of neighborhood residents to be different from the needs anticipated in the Downtown Brooklyn Plan. The public schools to which most local parents send their children have each experienced increases in enrollment; for example, PS 261 Philip Livingston currently exceeds its capacity by 15 percent. In addition, the number of riders travelling through area subway stations has increased more rapidly than in other parts of New York City, an increase of 30 percent from 2002 to 2014 compared with a 24 percent increase system-wide.

In addition to investigating the need for a Zoning Text Amendment, Borough President Adams recommended EDC and the New York City Department of City Planning (DCP) convene a task force to revisit infrastructure needs, including a fully built-out Brooklyn Strand, additional transit options, safer pedestrian and cycling connections, as well as improved access to health care facilities. To free up commercial space in Downtown Brooklyn, he reiterated his proposal to relocate government agency functions to sites such as Broadway Junction, in addition to calling for EDC to fast-track its Request for Proposals (RFP) to build additional commercial space in the neighborhood. He also called for expanding affordable housing opportunities, recommending the linking of parking reduction to use of the voluntary affordable housing bonus, as well as the mapping of remaining areas for use of that bonus. Additionally, following the recent announcement by the New York City Department of Education (DOE) of the inclusion of more than 3,000 new seats in the School Construction Authority (SCA’s) updated capital plan, a positive response to Borough President Adams’s letter to SCA President Lorraine Grillo last December, he expressed the need to work in partnership with local stakeholders and the DOE to appropriately locate the additional school sites and accompanying influx of students.