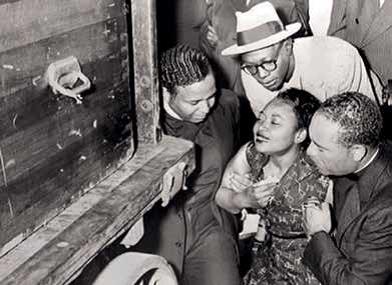 In Memory of Daisy Bates and Her Mother

March Women’s History month holds special meaning in Black history: Tubman died in 1910 in Auburn, NY; Dorothy Height was born two years later in Richmond, Virginia.  In 1956, the great Civil Rights strategist Diane Nash, a founding member of SNCC, didn’t plan for a peace march over the Edmund Pettus Bridge in Selma, Ala., to turn bloody on March 7th. But it did. Over the issue of Black people’s quest for Voting Rights.

Last month, J.E. Franklin, the matriarch of Black playwriting, invited us to attend this month’s production of her new groundbreaking play, “Race-Aid.”  The invitation comes on the eve of the 50th anniversary of her compelling, “Black Girl,” ahead of its time, and considered the progenitor of the current Black Girl movements in its exploration of the issues and experiences of young womanhood.

The timeless Ms. Franklin, a youthful and vibrant 81, marches on with her latest play, designed to change the conversation on racism.  Following is the press release from her office.  A review will be featured in Our Time Press in the future.

Last week, Our Time Press published an excerpt from Dr. Gloria Van Scott’s new memoir.  The passage authored by Melony McGant was presented as Ode to Glory. It celebrated the great friendship of Dr. Glory and her mentor, dance legend Katherine Dunham.

This week we’re presenting another compelling section from her memoir.  At the time of Dr. Scott’s “coming of age” in 1955, her cousin Emmett Louis Till, at 14, was brutally murdered.

Artists like dancer Dr. Glory and playwright Franklin have always, in the words of Dr. Glory, “translated anger and grief into passions, and praised the transformative power of art as a tool to combat the ugliness of prejudice.   Below, Dr. Glory and Ms. Franklin.

For My Cousin, Emmett Till

More than sixty years later and I am still looking for answers, so I am writing this missive to you and sending it out into the universe. I’m wondering if, on the other side of life, there is a beautiful field of flowers that has sections divided up according to the way that a person lived. If so, you, I am sure, are where the fourteen-year-old Archangels live. Fourteen—that’s how old you were on August 28, 1955, when your mother Mamie called to tell her cousin, my mother, that you weren’t coming home to Chicago from your vacation. You had been killed by racists while visiting family in Sunflower County, Mississippi.

Mamie Till mourns her son, Emmett Louise Till, kidnapped at gunpoint from his great-uncle’s house in Money, Mississippi, August 1956 and brutally beaten and lynched

We were seated around our dining room table in Chicago when my mother told me of your death. I stood up from the table, looked at her and crystallized my gaze, and then turned and walked out of the room without saying a word. My mind couldn’t take in the trauma and shock of that moment. I let the news slide into a safe holding space, and that is where the horror of your death stayed for decades.

In 2017, the newspapers printed a story about an artist, Dana Schultz, who had drawn a painting of the casket in which you took your final rest. Some people protested the displaying of this picture in the Whitney Museum, but, for me, the art was what broke down the walls of the safe space I’d carved out decades before.

As I sat that morning reading about the painting in the New York Times, time seemed to slow and the silence in my apartment suddenly seemed deafening, and sixty-two years of held-back tears made their way down my cheeks in a pilgrimage that startled me. My immediate thoughts went to Carolyn Bryant, the woman who had lied about you and set the wheels in motion that caused your death.

Carolyn Bryant, who claimed Emmett Till whistled at her, watches court proceedings that acquitted her husband, Roy, one of the two men who beat, shot and disfigured the teenager. Roy Bryant admitted he and his half-brother killed Till. Carolyn admitted she lied before her death

Have you grown weary of the race-rhetoric which passes for scholarship in the Institutional White-Race system?  If so, Race-Aid is available!

Playwright J. E. Franklin, whose Drama Desk Award-winning play “Black Girl,” was directed by Shauneille Perry in 1971 and by Ossie Davis, the following year as a feature film for Hollywood, has created The Race-Aid Project, to take us beyond the rhetoric, with an attractive dialogue Model which fuses art and scholarship.

The Race-Aid Project was introduced in 2016, by the International Communications Association with the presentation of “One Drop:  Dead or Alive,” three Race-themed plays written by Miss Franklin, about real-life people caught up in the intrigues of America’s blood-fraction laws, which establish  guidelines for who is “white,” and for how one becomes “un-white.”

Along with a play, Franklin includes Spoken Word, visual art and music, to “prep” the audience for sober conversation.

With a coveted Award from the Upper Manhattan Empowerment Zone (UMEZ) and the Lower Manhattan Cultural Council (LMCC), the Race-Aid Project will continue to be presented on the last Sunday of each month throughout 2019.

So how does The Race Aid Project differ from other dialogue models on Race?

First, according to J.E. Franklin’s account of her play, The Race-Aid Project collapses all the “stock” definitions of The Institutional White-Race system.  Recognizing that flawed definitions have led to flawed strategies, Franklin has designed the Race-Aid Model to re-frame our understanding of Race.  By re-setting the definition of The Institutional White-Race system, boundaries are established around the term to include what belongs to it and exclude what does not, so as to prevent overlap or confusion.  In so doing, the focus shifts automatically from the fallout—presented to us in the form of endless encounters, injustices and interactions of the racial kind—to the core system, with its complex, experiential machinery, methodically devised by The Church and installed in all the nation’s organs, to induce into the world an “immaculate”  species, between Man and God, on  Aristotle’s “Great Chain of Being.”

Second, through the use of a skilled facilitator and structured questions connected to the ideas reflected in the  art forms presented, the dialogue is steered away from rhetoric and confrontation.

Each presentation is evaluated through written responses from the audience.  Here are a few of those responses:

“The word race should be eliminated from the 2020 census and changed to ethnicity or ethnic.”

“Initially, I thought I understood the one-drop theory, but now I know I need to read more up on it.”

The Race Aid offering for this month will be “Nana Bessie’s Big Question,” the story of a young woman’s efforts to help her great-grandmother answer a haunting question of the racial kind.  A sit-down meal follows the presentation.

The Strength of a Woman, Part One

BK Lawmakers Applaud Expansion of Women Monuments Across the City