Black to the Stage!
Advertisement 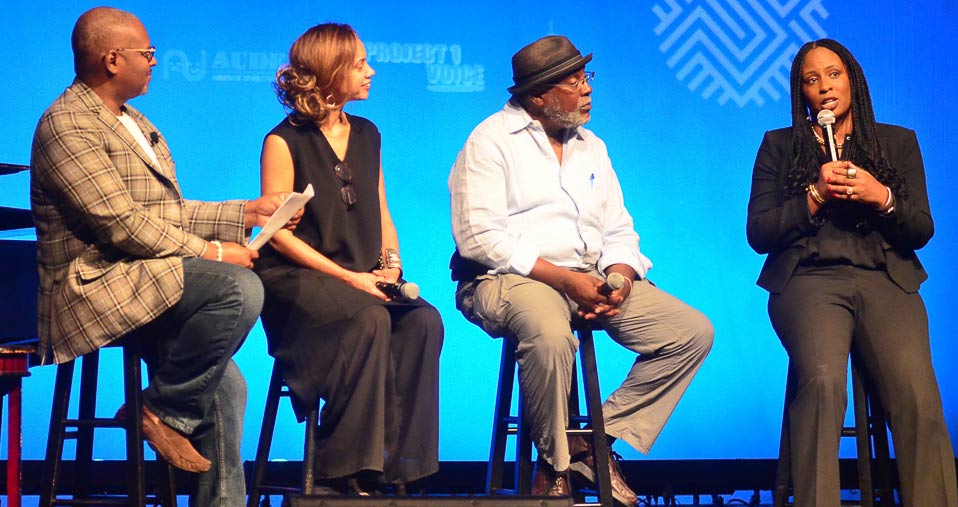 It was a joyous and electrifying evening at the Schomburg Center as the Black theater world convened to get a peek at the new fall season offerings on and off-Broadway and to present stage legend Andre De Shields with a Lifetime Achievement Award. The latter was the business at hand at the top of the program. Tony Award-winning producer Ron Simons was the host for the evening and presented De Shields with his beautiful award on behalf of not only his theater colleagues, but on behalf of an auditorium full of adoring fans.

Marcia Pendelton, President of Walk Tall Girl Productions/Black Theater Online, has seen her brainchild blossom into a full-blown beauty. For several years now, she’s augmented her theater promotion businesses with showcases of the best upcoming offerings for theater lovers. The Black Theater Preview at the Schomburg, a couple of years old, is just the newest iteration.

The support Pendelton offers and encourages others to offer, is critical to Black theater companies, playwrights, actors, directors and the other professionals who make the magic happen. They often do without the heat and light afforded non-Black theater companies with budgets big or small.

Her unflagging efforts have brought the Schomburg Center for Research in Black Culture into the fold, and for this presentation, AUDELCO President Jackie Jeffries and Project1Voice Founder and CEO Erich McMillan-McCall contributed to making it a special evening for the very special man. And this year has been his shining hour, as his much-beloved portrayal of Hermes in Hadestown won him the Tony Award for Best Featured Actor in a Musical, as well as the Outer Critics Circle and the Drama Desk Awards. His overall achievements over his storied career earned him the “key to the city” of his hometown of Baltimore this year and he will be inducted next month into the Theater Hall of Fame, among other scheduled honors.

De Shields spoke of his humble beginnings and the drive that has led him to his current status in his profession.

“The story I’m about to tell you is the truth, so help me all the Orishas!” said De Shields. “I come from a family of 11 children. Everyone was born by natural childbirth with the help of a midwife on a piece of newspaper, with my mother on her knees and the baby hitting the floor like a gourd!”

He said his mother had wanted to be a dancing showgirl and his father a singer, but those avenues were not open to them.

“I never, in my 73 years, doubted that I was on my chosen path,” he said. “My parents’ paths were a series of deferred dreams, so my destiny became – manifest these deferred dreams!”

A delightful treat was De Shields singing and dancing a bit to Wilson Pickett’s “In the Midnight Hour,” which he performed for his audition to win the titular role in the original production of The Wiz. The reception to his routine befits the old cliché, “The crowd went wild!” It did.

On to the presentation of dramatic readings, music and dance numbers and panel discussions which revealed many tasty and intriguing selections. There were scenes from: Ta-Nehesi Coates’ Between the World and Me at The Apollo Theater; For all the women who thought they were MAD by Zawe Ashton; Tina: The Tina Turner Musical; Thoughts of a Colored Man; Reparations, coming to the Billie Holiday Theatre; the musical Broadbend, Arkansas; Classical Theatre of Harlem’s A Christmas Carol in Harlem; and The Black History Museum…According to the United States of America, among others.

There were also conversations with playwrights and directors and a panel discussion with theater leaders Carl Clay of Black Spectrum Theatre, Indira Etwaroo of the Billie Holiday Theatre and Kamilah Forbes of the Apollo Theater.

It was all nourishing food for the mind, heart and spirit. When you hear word of the spring showcase – Go!

Related Topics:andre de shields
Up Next