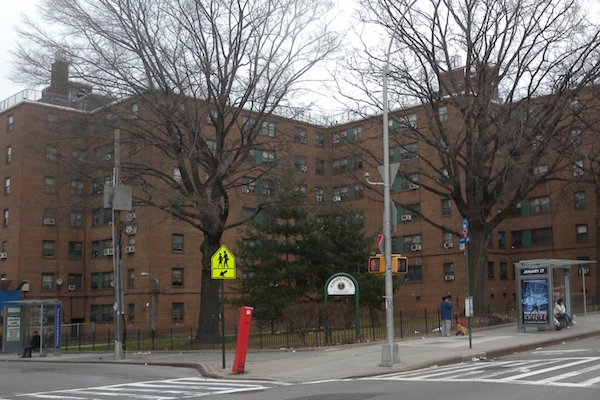 The proposed development is part of the city’s NextGeneration plan, in which various NYCHA developments will have some of their property portioned off for private development with the proceeds going back to the cash-strapped NYCHA.

NYCHA officials met yesterday with Sumner Tenants Association members to discuss the plan in what was the first in a series of meetings with community stakeholders to iron out all the parameters and possible perks to be included in the proposal before NYCHA seeks a developer for the project.

“So far, they’ve been fair. We’re under no false illusions. New York City owns the property so we can’t stop them from building, but we do have input in terms of where they put it,” said Sumner Houses Tenant Association President Raymond Ballard following the meeting.

According to a NYCHA release, the housing will be 100% affordable and situated in one of two locations — a lawn area on Marcus Garvey Boulevard, or at the basketball court and parking area on Lewis Avenue.

NYCHA will maintain ownership of the land and provide a 99-year lease to the developers who will build, operate and manage the new housing.

Ballard said the devil is in the details regarding what is really affordable and noted that the AMI (Area Median Income) in Bed-Stuy is about $25,400 annually, but if the AMI takes in the entire New York City area, then affordability would allow for much higher incomes.

“I don’t know any developer who will put money up front that doesn’t look for a good return. Another question is what’s affordable. My take on affordable is whoever can ever afford to pay the rent,” said Ballard.

Ballard said the Tenants Association would also like to see the project to include amenities for all the Sumner Houses such as a recreation center.

NYCHA spokeswoman Crystal Walker said the affordability levels and target populations will be determined in consultation with residents and other community stakeholders.

She also said while there hasn’t been any presentations made before Community Board 3, there will be an ongoing series of visioning sessions with community stakeholders leading up to a Spring 2017 Request for Expression of Interest (RFEI) from developers.

Walker said NYCHA has also spoken to Borough President Eric Adams, Councilman Robert Cornegy, Jr. and state Senator Martin Dilan – all of whom represent the area – about the project.

Cornegy’s office confirmed the councilman was in the loop on the proposal.

“As the mayor continues to roll out his affordable housing plan and funding from the federal government for capital funding shrinks, NYCHA will need to innovate. The building of the proposed senior facility is one such innovation that is needed in our community as Bed-Stuy is a Naturally Occurring Retirement Community. We look forward to working with CB3, Sumner Tenants Association and other community groups to create optimal living conditions for all residents,” said Cornegy.

Walker said if NYCHA receives developer responses by the end of 2017, construction would likely begin in 2019.