ANNA MARIA HORSFORD is …Forever Glamorous, Forever Real, Harlem to Hollywood and Back! Can we Get an “Amen?!”
Advertisement 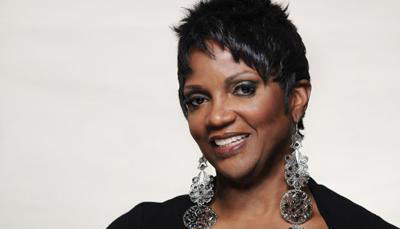 Hard to separate Anna Marie Horsford from the rich characters she portrays in film and on television.
She was Dee on The Wayans Bros., Betty in the comedy films Friday and Friday After Next; Helen on BET’s sitcom, Reed Between the Lines; Thelma on the NBC sitcom Amen.
And there’s no wonder no one ever forgets actress Anna Marie Horsford; she brings a little of herself into nearly every role.  It comes from helping directors and writers shape her characters.  And that comes from sticking as close to Truth as possible, in  honest portrayals reflecting unique experiences, and an understanding of where they come from.
One reason for the public’s affection for her portrayals is the realness she brings to her roles.
In the interview with Our Time Press several weeks ago, we learned that the “realness” is real; not the results of dramatic “systems,” acting “methods” nor the techniques of such directors as Steven Spielberg and Mike Nichols and co-stars as Morgan Freeman, Tom Cruise or Cicely Tyson.
Horsford self-directs, and most wise people listen to her and let her characters unfold. That works. Her fans sense she is connected to the story and to them!
She told us she knows the characters she portrays and the nuances of their lives.  She got that knowledge honest: from hardworking parents whose friends were giants in the intellectual and political activist world of the 1950’s. She heard their stories, could walk outside the Harlem brownstone and glimpse what Langston Hughes portrayed in words, she could see in motion and in life. Across the street from her home was James Vanderzee’s studio.  In the photographer great’s storefront window, were the images and news of the day.
If the audience senses Anna Marie is totally “in to” her portrayals, wait until next week when it is revealed how totally she is as into community building as her parents were. It is a truth that plays out in her personal life as Harlem-phile and humanitarian.
Who is Anna Marie Horsford? She impressed us as an artist, careerist, philanthropist and humanist – all the qualities you would want to believe our stars on screen are about in real life.  Anna Marie takes it a little further, she wants to tell our stories, and she is campaigning that we must document them necessary for coming generations.  She sees film as the way to do that and is venturing into producing documentaries.
“It’s about holding on to our stories, and our truths,” she said echoing similar words of John Henrick Clarke in an interview to us some 20 years ago.  Clarke, who told us about Sundays in Harlem, “looking clean,” parading down Seventh Avenue in Harlem, would have loved Anna Marie – and for all we know, he did.
Anna Marie loves Harlem and brings it to Hollywood and the world beyond every chance she can get.  A self-proclaimed “glamour girl,” our erstwhile homegirl, sister, friend, counselor, mother, auntie, scene interpreter, won’t admit to being a “movie star” – even if American television and films paint her as one.  “But I DO believe in glamour,” the fashionista told us. I believe when you come out the house, when you go out, you put on some clothes.  Yes, you know my people: they want to see me look good.”


Next week begins our conversation with Anna Marie Horsford.