An article titled “Free the Ballot,” about voting rights during the civil rights movement, from Memphis World newspaper, February 13, 1960.
Advertisement 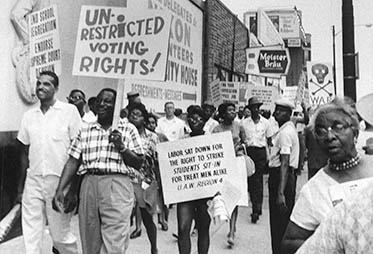 Free The Ballot
America is not fully free so long as the ballot is fettered in any part of the United States of America. The right of the Negro citizen to vote is embedded in the Fifteenth Amendment of the federal constitution. In a number of states the right-to-vote amendment has been frustrated, negated and butchered.

In the South there is only token Negro voting on an average basis. In a number of Southern counties with more Negro citizens than white citizens there are no Negro voters. This is a tragic commentary on American democracy. Excuse given for such racial denial of voting is the preservation of “white supremacy” and to prevent “Negro bloc voting”. The bogey of “Negro rule” and the preservation of “white rule” are other scares.

Still much is said of “States’ Rights” and “local rule.” Yet local rule should be based upon the rule of the local people. States’ rights envision a respect for personal and individual rights. Southern politicians tend to distort the theory of states’ rights and to misapply the idea of local rule.’

The Fifteenth Amendment bestows upon the Negro citizen a right which constitutionally cannot be removed by state action or states’ rights doctrines. Yet that very thing is being done in the South and the Congress has been indifferent and laggard about using its authority and power to protect, guard and actuate the Negro citizen’s right to vote in the South.

A number of bills have been introduced in the Congress seeking to implement the Fifteenth Amendment. The Republican Administration and the Democratic Majority Leadership together with individual lawmakers have submitted bills designed to make voting rights practical opportunities for the Negro group. Introduction of bills, press releases about them and the criss-cross of quibbling partisan criticism, do not always produce legislation.

Therefore if the President of the United States actually means that he is for meaningful voting by the Negro group in the South he is going to have to begin to fight with all of his power for such legislation. He probably will need to carry the fight to the people in a special nationwide civil rights speech. We would like to see President Eisenhower carry the fight for practical voting opportunities to the people and exert bold and uncompromising leadership for the right to vote.

In the meantime, those who want Negro voting opportunities established and materialized in the South should build a fire under Congress. A hard fight is a hand and the Southern lawmakers in Congress are tough, skilled and experienced counter fighters, let Congress have no peace of mind, no easy conscience and no happy time at the polls until adequate civil rights legislation is passed in the current session.