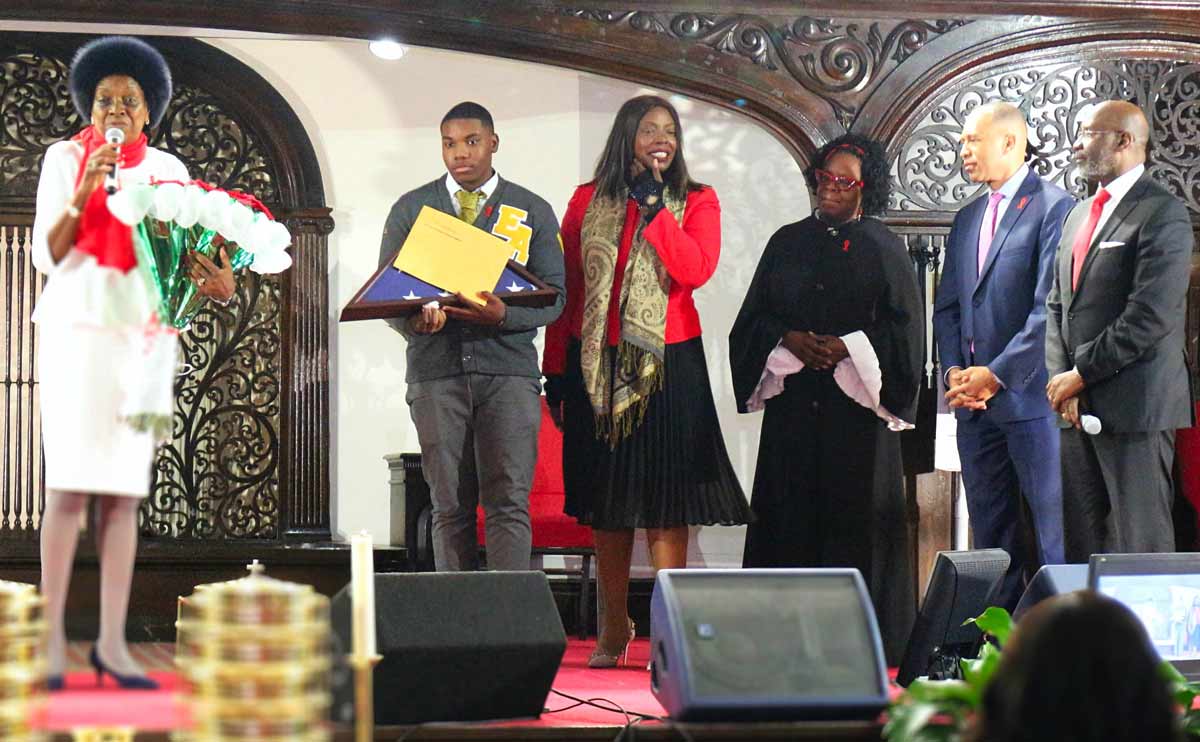 Dee Bailey Thanks her church and family at Antioch’s special moment in her honor.

By Antioch Church Members
Leslie Tene Marshall (Text)
and Sherley S. Joseph (Photos)
Suppose the traditional meaning of a birthday is the anniversary of the day when a person was, born, and that day is typically treated as a celebration and giving gifts. In that case, every Sunday is a birthday for most Black Brooklyn churches.
But on Sunday, Dec. 4, finding a faith entity to surpass the celebration at Rev. Robert Waterman’s Antioch Baptist Church on Greene Avenue in Bedford-Stuyvesant would be a challenge. The church rocked with great choral music, dramatic liturgical dancing, and family singing at the prelude to the urgent message of Rev. Waterman preaching from Samuel and sharing with the church family through his personal experience, following something Waterman said may become a tradition, the actual birthday of the Queen of Brooklyn, Sister Divinah “Dee” Bailey, followed by a Country Feast in the dining room by Antioch’s well-known chefs.

Framed by Antioch, the spiritual birthday encouraged the congregation to help others and give to others in need. He urged the congregation to think about the words, “Let the work I do speak for me,” and remember to “look back and help someone when you rise.” It was a fitting message for the moment because Lady Dee, a member of the church, and her legion of followers and friends, walk the words daily in their lives and professions.
The Antioch Sunday’s family included such notable guests as leaders Hakeem Jeffries, in his first official public outing since elected to head the Democratic Party; Brooklyn DA Eric Gonzalez, NYC’s education czar David Banks; Gwen Carr, the mother of Eric Garner, Senator Latrice Walker, Councilwomen Rodneyse Bichotte, Hermelyn whose comments were a heartrending testimony and a nod to Dee Bailey’s maternal instincts alluded to by Gonzalez who also called her a friend forever; many jurists, including an all-star list of honorables: Robin K. Sheares, Cenceria Edwards, Sharon Hudson, Wavny Toussaint, and community leaders among leaders, political leaders, educators, educators, administrators: Evelyn Castro, Sen. Myrie Zellnor, Councilwoman Crystal Hudson, Chief Scott Henderson, Inspector Winston Faison, and more.

They came to celebrate Ms. Bailey’s birthday, but they rocked with the congregation and swayed with her during her favorite service. At the “party,” “Dee” Bailey was celebrated for who she is. Selfless, caring, giving, like a mother, a friend always, and beautiful were the adjectives reverberating throughout the sanctuary and in the dining hall.
Tributes rang out to sister Dee, Vice President and Chief of Operations for the African American Clergy and Elected Officials (AACEO), and founder of the groundbreaking Watchful Eye she built over the years against incredible odds into an institution for community awareness of HIV/AIDS and the importance of “getting tested” and “knowing your status.”
Of course, it was a good look to have all these people with magnificent titles in the room sitting with the come-as-you-are regular church family members. It showed unity and community. But the icing on the cake for me was a small moment when Dee called up her grandson. She spoke proudly of his achievements and celebrated him as if it was his birthday. You could hear the love in her voice and the expression of pride on her face, and you could tell this is a woman who prays, puts in the work at home and in the community, and knows the meaning of birthdays. When called to the spotlight, she gave it to her grandson. It was a small moment in a day of many beautiful moments, but it showed the specialness of this great lady. She knows the importance of every day as a birthday, and every moment is an opportunity to be born again in spirit and in good deed.