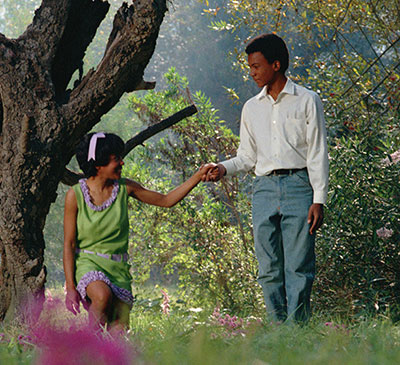 When he made the movie “The Learning Tree,” Gordon Parks probably didn’t intend for it to be relevant 50 years later.

“It’s still relevant today,” said Kirk Sharp, executive director of the Gordon Parks Museum on the campus of Fort Scott Community College. “It was important when in came out in ‘69, and it’s still important today.”

Based on his 1963 semiautobiographical novel, “The Learning Tree” chronicles the life of a black teen’s journey into manhood while living in a small Kansas town and dealing with the prejudices of the day. It was released by Warner Brothers in 1969; though it didn’t win any awards, it was widely praised by critics. It was one of 25 movies chosen to be added to the Library of Congress’ National Film Registry in 1989 — the year of that registry’s debut.

The museum’s 16th annual celebration will spotlight the movie, held in recognition of how it was made by a Fort Scott native in his hometown, will honor the film’s actors and locals who were involved in its production.

Sharp said that more details about the celebration would be announced closer to its scheduled date of Oct. 3. Plans for the event already call for honoring cast members Stephen Perry, S. Pearl Sharp and Karole Graham, as well as others who may have been extras.

“It’s an unknown number,” Sharp said. “One of our goals is to find out exactly who was in it. A lot of people say they were, or a family member or friend were.”

The movie was historic: It marked the first work from a black director backed by a major Hollywood studio. After Parks’ book was published, actor and filmmaker John Cassavetes set up a meeting between Parks and producer Kenneth Hyman, who had just become the head of production for Warner Brothers-Seven Arts at the time, according to a news release from the studio.

The meeting took all of five minutes. Despite Parks’ complete lack of filmmaking experience, he was hired to write and direct the movie. A week later, Parks was further entrusted with the film’s musical composition and production.

What Parks lacked in filmmaking and directorial skills, he more than made up for as a photographer. In the ‘40s, he was widely known for his photojournalism and photography, capturing images of African American experiences. His work was featured in Vogue and Life magazines.

His work on “The Learning Tree” launched a trailblazing film career. With 1971’s “Shaft,” Parks created the blaxploitation genre.

Yet “The Learning Tree” remains as one of the most powerful, timeless works from a true Renaissance man, Sharp said.

“It’s a film about a boy and his whole complete story of growing into manhood in a small community,” Sharp said. “He learns about racism, discrimination, love, fear, what happens with the law and a lot of other developing social things.”

Harriet, Dolemite and the Art of Storytelling