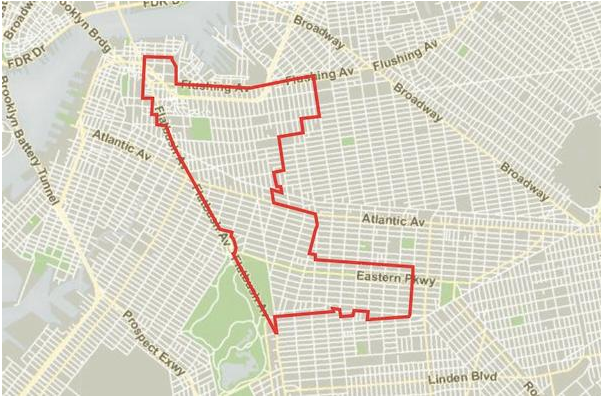 While the residents of the 35th Council District exercised their civic duty by attending a candidates’ forum, A group of five unnamed young people had been sent to pass out literature designed to defame a community resident and misinform the public about the New York City conflict of interest protocol.

The group consisted of four boys and one girl stationed at the front of the school entrance during candidates’ forum where incumbent Laurie Cumbo (D), Ede Fox (D), and Jabari Brisport (Green Party) debated one another at the July 25, 2017 event at Epiphany Lutheran School. The Republican candidate Christine Parker did not attend.

The young people wore Ede Fox stickers on the front of their jackets but instead of distributing Fox’s campaign material, they passed out flyers that defamed Alicia Boyd, leader of the Movement to Protect the People and active with Brooklyn Community Board No. 9 and a Fox supporter. The sheets publicized the fact that Boyd is an Airbnb host in a derogatory manner and claims that Airbnb gentrifies communities despite the fact that most Airbnb guests are young adults seeking low-priced accommodations and the hosts within the five boroughs earned an average of $5,474, allowing many of them to stay in their homes. (Source: Airbnb, June 2015 – June 2016)

The other document dispersed with the one sheet on Boyd was a packet whose cover page is marked “Conflict of Interest E”. This reporter received a PDF of the “Conflict of Interest E” document via e-mail. The sender wrote in the covering e-mail, “It appeared to be an official body of law, basically stating that as long as a chairperson doesn’t vote on a subject matter pertaining to his employer, then he can stay on the board”. The sender is of the opinion that the pamphlet is “completely fabricated”. While this assessment is debatable, it is a fact that New York City’s Conflict of Interest Board marks the top of each page of the rules with “Conflict of Interest Board of the City of New York COIB” and has the New York City watermark on each page. The PDF does not have such markings. One must ask how does this material pertain to any of the candidates?

Alicia Boyd views the action of the person or people who brought the five youths together gave them the Ede Fox stickers to wear and papers to distribute at the public forum as “endangering minors”. One of the boys bumped Ms. Boyd’s shoulder with his shoulder as he walked past her. The act appeared so willful that Donna Mossman, another campaign volunteer for Ede Fox, called the NYPD to report the incident.

Donna Mossman is on sabbatical from the Crown Heights Tenants Union to volunteer on Fox’s run for office. During a July 29, 2017 telephone interview, Ms. Mossman described her interaction with the five young people:

Mossman and Boyd share the same concern for the character development of these five people. While they are not in physical danger, it is a concern whether their moral compasses will go awry. Mossman submitted a statement to this writer which reads:

“I was deeply disturbed this evening at a political event…watching as our young people were convinced that wearing a sticker on a patch with a candidate’s name on their shirts and…handing out negative literature about the same candidate’s major supporter…We must all provide a ‘safe and sacred’ space for our children…teaching our young people to be deceitful sets them on a path of destruction, especially in politics. This is no way to win.”

Regarding a chairperson’s voting on a subject matter pertaining to his employer: The Conflict of Interest Board of the City of New York (COIB) has a chapter entitled Community Boards wherein a section entitled Outside Financial Interest contains the following language:

…The member must disclose the interest to the board, and is then free to discuss the matter with his or her fellow board members although a community board member is not permitted to vote on any matter that may result in a personal and direct economic gain to him/herself or anyone associated with the member.

As of now, who sent these young people is unknown. Though they stated they were working on Fox’s campaign, they offered no words or written messages to bolster her. Rather, the material attacks someone who is not running for office. Further, conflict of interest passages from COIB and the unreferenced passages refer to community board operations. It is unfortunate that young people were unwittingly put in the middle of petty political acrimony.

(When contacted, Ms. Fox offered no comment on the story.)