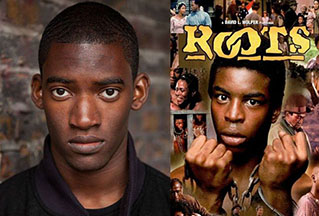 A remake of the 1977 television miniseries ROOTS will air on May 30, simulcast on the History Channel, Lifetime and the A&E networks. Many wonder why. Why not? The miniseries was adapted from Alex Haley’s Pulitzer Prizewinning book, “ROOTS: The Saga of An American Family”, published in 1976. “ROOTS” 2016 is not a full remake. Historians knowledgeable about the Middle Passage were hired as advisers and the narrative focuses more on the enslaved Africans and “the social violence of separation from their entire genealogy in Africa”. A NY Times essay referenced the African Slave Trade as “the most complex migration in modern history”. ROOTS is a disturbing chapter in American history. Slavery and its attendant racism have left indelible marks on American consciousness.

Malachi Kirby and LeVar Burton, Kunta Kinte, now and then.

The original ROOTS aired 8 nights with more than 13 million viewers every night. Its finale was watched by more than 100 million people. ROOTS 2, a 4-night miniseries, stars Malachi Kirby, a Brit of Jamaican ancestry who plays an enslaved African, Kunta Kinte, a young man who is from an elite Gambian family who is polyglot. Forest Whitaker, Laurence Fishburne, Anika Noni Rose, Mekhi Phifer, rapper TI are among the motley cast of characters. LeVar Burton, the original Kunta Kinte, is R2 co-producer. Mario Van Peebles directs one of the four segments. Questlove is the music director. ROOTS 2 characters are supposed to be edgier.

Edward M. Nero, a white Baltimore police officer, was acquitted on all charges in the arrest of Freddie Gray, who died in police custody in 2015.   It was a bench trial, which will probably be the new pattern now that policemen are indicted.

The Brooklyn District Attorney’s Office recently dismissed charges of disorderly conduct leveled at Glen Grays, an African-American US postal worker who was aggressively manhandled by members of the NYPD. Prosecutors arrived at that conclusion after talking with Grays. But it was cell phone photography which documented the Grays/NYPD confrontation.   What is next for the cops who manhandled Grays, Commissioner Bratton?

If you are cynical about voting in the November 2016 elections, read Atlantic Magazine’s cover story, “The Mind of Donald Trump: A Psychologist’s Guide To An Extraordinary Personality” by Dan McAdams. It is an insightful clinical profile. McAdams employs 5 measurement groups: extroversion, neuroticism, consciousness, agreeableness and openness. He compares and contrasts Trump’s behavior with both living and dead US presidents. The Trump profile compares with that of President Andrew Jackson’s “Remember what he did to the Native Americans?”

What is up with the Democratic Party’s presidential contenders? Senator Bernie Sanders is fighting the good fight to the presidential nomination despite the delegates’ math. He refers to Hillary as “the lesser of two evils” in a race with Trump. Why can’t he be tempered? The ouster of DNC Chair Congresswoman Debbie Wasserman-Schultz? A larger platform at the Democratic Convention in Philadelphia? The Vice Presidency? Last week on CNN, Madame Secretary Clinton emphatically dismissed him, saying that her nomination was assured. Days later, she enthused that first hubby Bill would be her economy czar!

The Harlem Baptist Temple, a church located at 20 West 116 Street, which is sandwiched between 1400 Fifth Avenue and the Kalahari condominiums, was sold to Carthage Real Estate Advisors. The church will be razed and replaced by an 11- story residential building.   New owners are undecided if the new structure will house rentals or condo units. The Harlem Baptist Temple will use the cellar and ground floors in the new structure.

Mayor Bill de Blasio’s Administration was able to circumvent a restrictive deed feature for a Dance Theater of Harlem land lot, located on St. Nicholas Avenue at 152 Street, and sold it to a developer for $3 million. The DTH deed restriction stated that the lot could only be sold to a nonprofit arts organization. The deal is similar to a restrictive deed feature for a lower Manhattan nursing home, which was sold to a developer for $14 million, who flipped it two months later for $114 million.

BET Networks Chairwoman/CEO Debra Lee joins the Board of Directors of social media behemoth, TWITTER. The Brown University undergraduate, the Harvard Law School graduate, attorney Debra Lee made the Hollywood Reporter’s List of the 100 Most Powerful Women in Entertainment.

Howard University President Dr. Wayne A.I. Frederick has been named by President Obama to the Board of Advisors to Historically Black Colleges and Universities (HBCUs). The board advises both the US President and Secretary of Education on strategies which will strengthen HBCU culture.

Dr. Georgina Falu, an Afro-Latina born in Puerto Rico who relocated to New York where she cut her teeth on African civilization and culture under the tutelage of Dr. Yosef ben-Jochannan in 1984. Today, boasting frequent trips all over Africa and equipped with a Ph.D. from Columbia University, she is a household name in education, entrepreneurial and scholar circles in the US, where she is based in the Caribbean, Latin America and Africa.   A member of the World African Diaspora Union (WADU) and an ambassador of Pan-African unity, her Falu Foundation co-hosts the Annual May Tribute to WADU, an invitational, on Friday, May 27 at the African Union Permanent Observer Mission To The Union. E-mail her at drfalu@falufoundationny.org.

People: The Big and Smalls of a Landmark: Something to Rap About

Young Chess Expert Plays 13 at Once