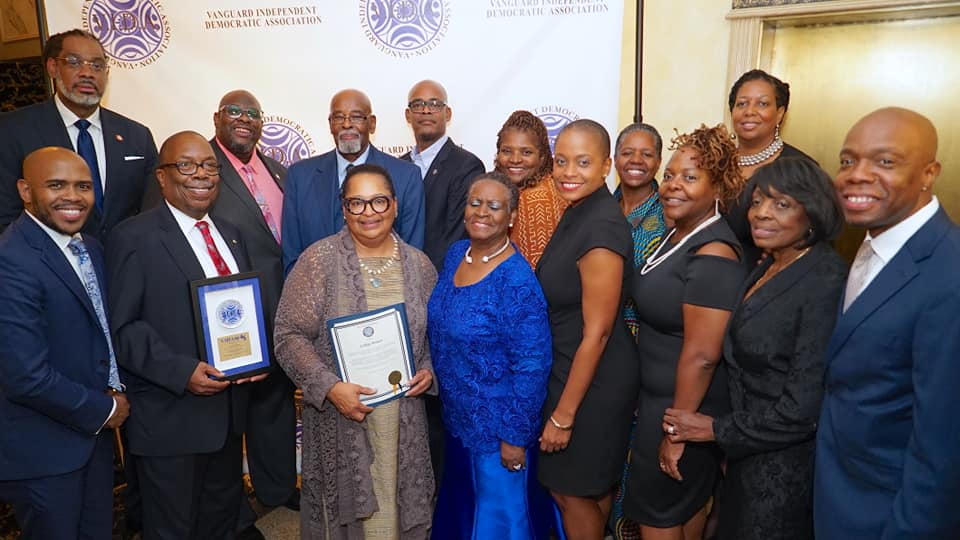 There’s no sweeter accomplishment than the one that comes from consistent effort and concentration on realizing a particular goal. Then when one looks to the right, left and back to see others collaborating with you, one knows the mission will be accomplished. Albert Vann and Annette Robinson are examples of such mission-driven effort. They and a cadre of community residents held fast to politically, economically and academically empowering the people of Central Brooklyn through the establishment of the Vanguard Independent Democratic Association (VIDA) in 1973. Albert Vann and many more people can look back on 45 years and wonder how did 45 years elapse so quickly. They also consider what more needs to be done.

The celebration at Giando’s on the Water in Williamsburg makes the case that VIDA is on task and has experienced victories due to collaboration, planning and plan execution. There are still many people who need to be politicized, educated and enjoying a better standard of living for their households.

The night of October 11, 2018 at Giando’s on the Water was one filled with recognizing people in different fields of endeavor starting with the cadre of people who made up VIDA’s board and moving on to congratulating professionals in their given fields for making positive impacts in labor, health, education, transit and the unions to name a few. VIDA counts 37 people as founders and 19 people as pioneers who are alive and acknowledge the 16 founding members and 12 pioneers who have since passed away.

With all the tables and chairs in use, it is accurate to estimate approximately 400 people enjoyed VIDA’s 45th year of community and political activism in grand style. The invited were donned in African print, kente cloth and the latest cuts in gowns and men’s suits. Giando’s on the Water is known for its ceiling-to-floor-length glass windows where diners can effortlessly enjoy views of the Brooklyn Bridge, Manhattan Bridge and Williamsburg Bridge as well as the Manhattan skyline.

Besides the business, civic, governmental, academic and political accomplishments acknowledged that night, longtime marital and social relations were evident. There were tables filled by three generations of a family. Albert Vann had one such table. It is worth noting that so many business, marital and civic relationships have withstood the test of time.

Keeping an eye on the mission, CM Cornegy included in his celebratory statement a request to “Call out to people, to contact family [in Midwestern states] to encourage them to vote in the upcoming elections” in order to reverse the direction the nation is going under the President of the United States. Similarly, Al Vann stated he will “contact people in his cell phone to determine whether they are registered to vote. Those who aren’t, I will delete them.” If they are registered, he will attempt to convince them to vote. The issue is giving power to the people but how can that occur “when less than 50% are registered to vote in the United States.”

In her introduction of Al Vann to the podium Annette Robinson said, “They are working so hard to suppress our vote. Here now to bring focus to the man of the hour, it is indeed an honor to introduce Albert Vann. Al Vann is a man of deep thought, a man of courage and stands up for his people. Mr. Vann’s speech consisted of describing the conditions of Central Brooklyn, with attention to Bedford-Stuyvesant, before and after social and political activation by the Vanguard Independent Democratic Association. Vann has had a concern for the quality of education provided in the community as well as enervating residents to take ownership of Central Brooklyn, regardless of documented title to a particular block and lot. He has striven to build a strong and lasting “Black political base.” In his retirement, he stays active by heading the Boys and Girls High School Advisory Board. He is aware that more needs to be done to galvanize and sustain the community, therefore, he continues to work and enlist others to take on the responsibility.

Food for the Soul: The 4th Annual Madiba Humanitarian Awards