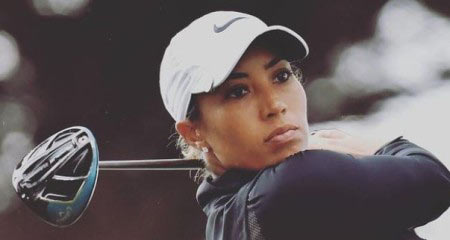 May 18, 2021 | BY AAGD STAFF
The U.S. Women’s Open is the second major of the LPGA season and has the highest purse in women’s golf, at $5.5 million in 2020. The 76th U.S. Women’s Open will be held at The Olympic Club (Lake Course) in San Francisco, Calif., from June 3-6, marking the first time a major women’s competition will be held on the elite layout. After a year disrupted by the COVID-19 pandemic, 2021 has geared up to be an incredible season for the LPGA Tour.
The 2021 LPGA Tour schedule will feature 34 official events across North America. Those who have qualified for the 2021 U.S. Women’s Open include two Black women, Amari Avery, and Cheyenne Woods.

Amari Avery, age 17
Avery, who will compete in her first U.S. Women’s Open after sharing medalist honors on May 3 in Los Angeles, was featured in the 2013 Netflix documentary, “The Short Game,” which followed several juniors at the U.S. Kids Championship in Pinehurst, N.C. Avery shares a birthday with her idol, Tiger Woods (Dec. 31), and like Woods, has a Black father and a Thai mother.
In 2019, Avery advanced to the semifinals of the U.S. Women’s Amateur Four-Ball with partner Alexa Pano, who was also featured in “The Short Game.” Avery advanced to the Round of 32 in last summer’s U.S. Women’s Amateur and reached the Round of 16 of the 2018 U.S. Girls’ Junior. Avery, who captured a Cactus Tour event in Arizona last year, has committed to attend the University of Southern California in 2022.

Cheyenne Woods, age 30
Cheyenne Woods, the 30-year-old niece of the 15-time major champion Tiger Woods, won her U.S. Women’s Open qualifier last Monday at Spring Lake Golf Club in New Jersey in routine fashion – a five-stroke throttling that helped her earn a spot in this year’s national championship.
This marks the seventh consecutive time the U.S. Women’s Open has received more than 1,500 entries, with the USGA accepting 1,595 entries for this year’s championship, the most since 2017. The 2015 championship at Lancaster (Pa.) Country Club holds the entry record with 1,873. The USGA accepted entries from golfers in 47 states, 249 entrants from California among them, and a total of 57 countries.
Eleven U.S. Women’s Open champions and 24 of the top 25 players in the world are among those entered in the 76th U.S. Women’s Open Championship, making for a strong and competitive field.

Naomi Osaka: “Before I am an Athlete, I am a Black Woman”

Lizzo, The Lakers Game, and the Fetishization of the Big Girl