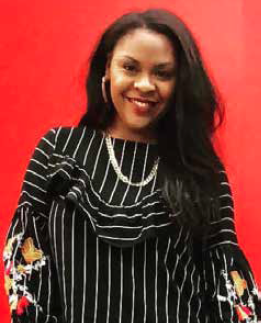 In October 1998, Our Time Press chronicled the passing of Robert Cave, Sr. Cave was a prominent Brooklyn photographer who specialized in capturing events. Mr. Cave passed away on September 8, 1998 of heart failure, leaving behind two children, son Robert, Jr., and daughter Eurila. We chronicled Eurila in that same issue. At the time, she was a 19-year-old with a passion for developing her own photos, a precocious young woman with beautiful bright eyes which seemed to conceal well the sorrow she must have felt, having lost two parents in a three-year period. Sheila James Cave, Eurila’s mom, passed away in 1995. In that issue, we published a photo shot by Eurila in 1996, a rooftop picture amidst a Brooklyn Brownstone community at dusk. When asked about her inspiration back then, Eurila said, “I like taking rooftop pictures because the sky symbolizes heaven, even on its worst day. Being further off of the ground brings me closer to my mother, who passed away. And every time I develop a picture of a sunset or a skyline, I hope to see my mother’s eyes hidden in the scene somewhere.” I first met Eurila in 2010. She was shooting family portraits at a Kwanzaa Bazaar taking place at For My Sweet. She was quirky, sweet and a true professional when it came to photography. We kept in touch through Facebook, and I watched as she began to flourish at her craft, fully unaware of the source of her inspiration. She uses her lens to capture our community in ways that those less familiar, less comfortable and less aware of the terrain would miss. But the woman behind the camera is just as enigmatic as the subjects she chooses to shoot. The married mother of two is a dynamo, spending her days shuttling kids to and from school, and her evenings capturing our history on film. Cali York Creative Visual Media Productions was created in 2011 as a vehicle for Eurila to develop her organically expressive nature. “I started Cali York because I wanted to explore working for myself, and I wanted to do so with a tool that I already had in my arsenal, my camera.” She shoots weddings and events. She does headshots and portraits. She sells prints, and she even teaches workshops on such necessary skills like how to take the perfect selfie. Her work has been on bus stops and on train station advertisements. She’s shot elaborate galas and on red carpets. She even has her own blogshow. Eurila perceives our world through the lens of her camera, and her interpretation is vibrant, deliberate and quite fun.

At 38, Eurila is far removed from the young woman we chronicled back in 1998, but in many ways, she is still the same. That youthful exuberance for seeing the beauty in her surroundings hasn’t changed, and neither has her deep connection to her community. She’s a Brooklyn girl, the maturation of that promise from a generation before, back when children from our neighborhood wore sweatshirts from the 40 Acres and a Mule store, learned who John Coltrane was by watching “Mo’ Betta Blues” and knew nothing about the importance of likes and retweets. She is a product of Old Brooklyn, a place that was eclectic and funky way before gentrification. Most importantly, she’s amazing at what she does for a living. Some of her work was recently published in a new book titled MFON: Women Photographers of the African Diaspora. Her pride for being included in such a project is deserved, and we expect nothing but great things to come for her in the future. Sheila James Cave and Robert Cave would be absolutely pleased with their daughter.

Panther, to the People

From Wakanda with Love