The Spirit of Ntozake Shange
Lives in Brooklyn
Advertisement 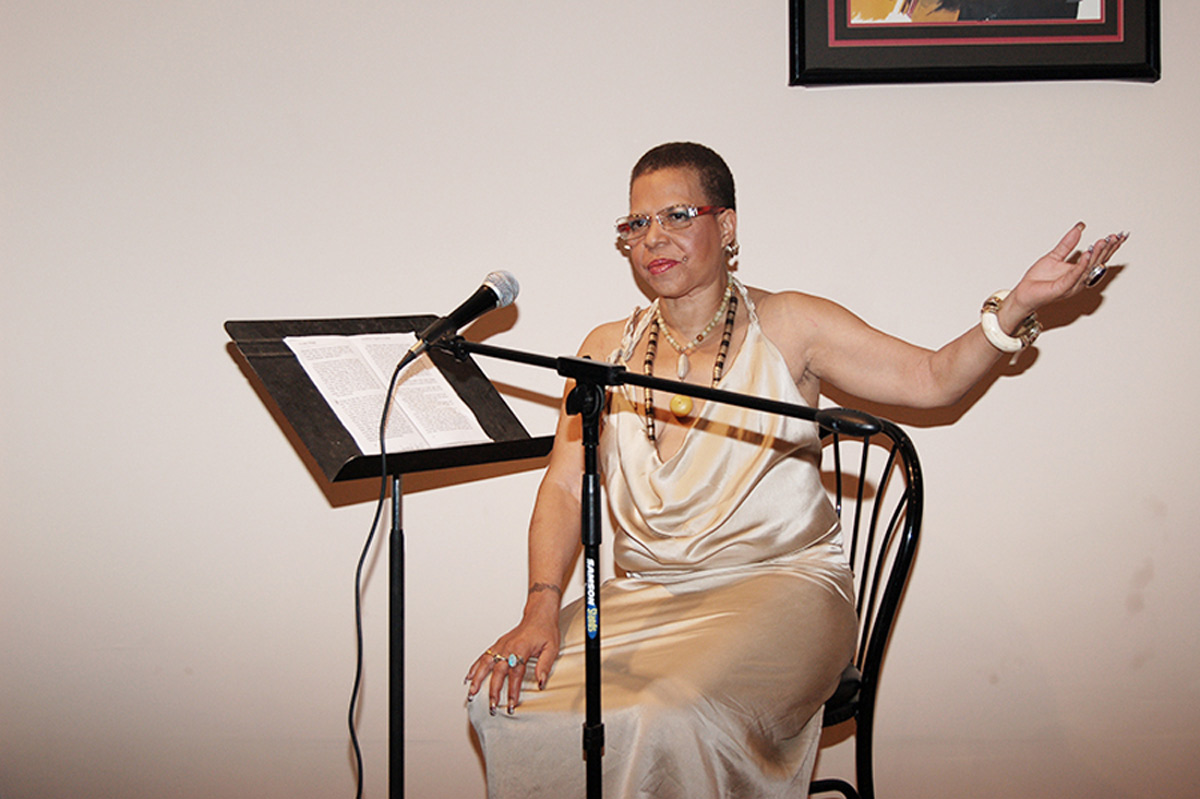 Sistas’ Culture Warrior: This week, Omowale Clay of The December 12th Movement provided this photo of Ntozake performing at Brooklyn’s renowned Sistas Place -- the Off-Off Broadway obligatory stopping grounds for any Black performing artist of note, locally or internationally, emerging or established. It was taken on October 24, 2009. Viola Plummer of Sistas Place told Our Time Press, “We were honored to have Ntozake come to Sistas Place first with violinist Billy Bang. Her groundbreaking work shows culture as a weapon!” (Photo: Courtesy of Sistas Place)

Yesterday evening, Broadway’s Booth Theatre celebrated the return of Ntozake Shange’s 1976 production of For Colored Girls who have considered suicide/when the Rainbow was enuf to its domain.

While the opening revival event was another milestone in the history of the great writer and her masterpiece, little known is Ntozake’s familial relationship with her beloved Brooklyn prior to For Colored Girls …”  arrival to the Great White Way more than 50 years ago.
The chapters of her life story include notes on her presence in Bedford-Stuyvesant during the late 1960’s, and as a resident of the borough as her last community-based home — for _5 years, from 2009.

Ntozake Shange lived on Monroe Street a few blocks from the ancestral Greene Avenue residence of the late Jitu Weusi, founder, in 1969, of The East community education, culture and arts mecca located then at 10 Claver Place.  The East was the reigning ground for up-and-coming Black culture and performing artists of color in the late 60’s.  Ntozake’s genius was welcomed there long before she became a world-acclaimed legend. She developed the roots of her classic For Colored Girls  throughout Brooklyn, Manhattan and New Jersey at such places nurturing spots as The East in Bedford-Stuyvesant.

Of course, she did the Kings County culture circuit establishments, with speaking and performing engagements at the Brooklyn Public Library,  Brooklyn Academy of Music, and Medgar Evers College, among other sites.  She also performed at such community favorites as Sistas Place 456 Nostrand Avenue at Jefferson Avenue (Frederick Douglass Place).

In 2014 she left her last spiritual resting place for an assisted living facility in Maryland, where she passed in October 2018.   On December 6, 2018, the Brooklyn Museum honored the legendary poet, who died in October 2018, with a special tribute hosted by poet, educator, and activist Mahogany L. Browne featuring  poets Staceyann Chin and Simone White, and a performance by Umar Bin Hassan, Baba Donn Babatunde, and Abiodun Oyewole, the founding members of The Last Poets.

“Shange ‘talked’ to Brooklyn,” said Viola Plummer, political strategist of the December 12th Movement, and a founder of the popular Sistas Place. “And Shange heard with her heart.”
More Shange pg 12