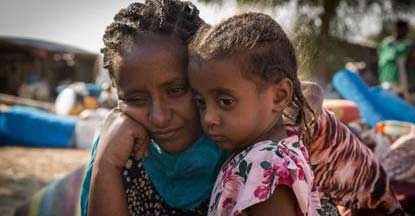 (TriceEdneyWire.com/GIN) – In what may be President Biden’s first major test in Africa, a key U.S. ally stands accused of undertaking a campaign of ethnic cleansing, massacring hundreds of unarmed civilians and threatening the fragile stability of the region.
President Joe Biden, confronting the scenario linked to U.S. ally Ethiopia, shared his concerns in a telephone call this week to Kenyan President Uhuru Kenyatta.
Biden’s phone call comes as the international community reels from the horrific details in a new report by Amnesty International describing the massacre of unarmed civilians in less than 48 hours by Eritrean troops in the restive northern Ethiopian province of Tigray last year.
Testimonies by over 40 witnesses described the systematic killing of civilians by soldiers in the northern city of Axum, opening fire in the streets and conducting house-to-house raids in a massacre that may amount to a crime against humanity, according to an internal United States government report obtained by The New York Times.
The U.S. government report written in early February, echoed some of the Amnesty findings. It documents in stark terms a land of looted houses and deserted villages where tens of thousands of people are unaccounted for.
Survivors and witnesses described extrajudicial executions, indiscriminate shelling and widespread looting after Ethiopian and Eritrean troops led an offensive to take control of the city during the conflict with the Tigray People’s Liberation Front (TPLF) in mid-November.
Satellite imagery analysis supported reports of indiscriminate shelling and mass looting in the ancient city of Axum, said Amnesty, and appeared to reveal the sites of new mass burials near two of the city’s churches.
“The evidence is compelling and points to a chilling conclusion,” said Deprose Muchene, Amnesty’s director for east and southern Africa. “Ethiopian and Eritrean troops carried out multiple war crimes in their offensive to take control of Axum. Above and beyond that, Eritrean troops went on a rampage and systematically killed hundreds of civilians in cold blood.”
Ethiopian authorities issued a statement on Friday referring to “complex challenges in the region” and reasserting their intention to arrest senior members of the TPLF, which it described as a criminal “rogue group”.  Ethiopia’s ambassador to Belgium, Hirut Zemene, told a webinar on Thursday that the alleged massacre in November was a “very highly unlikely scenario” and “we suspect it’s a very, very crazy idea.”
Eritrea’s information minister, Yemane Gebremeskel, on Friday said his country “is outraged and categorically rejects the preposterous accusations” in the Amnesty report.
Ethiopia’s prime minister, Abiy Ahmed, launched the military campaign on Nov.4, accusing the TPLF of attacking federal military camps in Tigray and seeking to destabilize the country. Communications to the northern state were cut and journalists and humanitarian organizations were denied access.
But thus far Mr. Biden and other American officials have been reluctant to openly criticize Mr. Abiy’s conduct of the war, while European leaders and United Nations officials, worried about reports of widespread atrocities, have been increasingly outspoken.
The African Union has been unable to resolve any of these issues, not least because other member states are leery of antagonizing the country that hosts their organization, according to a regional expert. The EU has suspended nearly $108 million in aid to the government in Addis Ababa, to no apparent effect. The UN has done little more than wag a disapproving finger.
Abiy, who won the Nobel peace prize in 2019 for making peace with neighboring Eritrea, declared victory against the Tigray People’s Liberation Front (TPLF) after federal troops seized the city of Mekelle in late November, and said no civilians had been killed. His government denies the presence of thousands of soldiers from Eritrea.
It is hoped that Kenyatta will use his bully pulpit to address this and other major crises when he takes the chair of the African Union Security Council this month.

GLOBAL INFORMATION NETWORK creates and distributes news and feature articles on current affairs in Africa to media outlets, scholars, students and activists in the U.S. and Canada. Our goal is to introduce important new voices on topics relevant to Americans, to increase the perspectives available to readers in North America and to bring into their view information about global issues that are overlooked or under-reported by mainstream media.