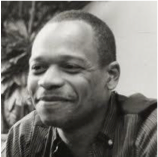 For the past three years I have worked passionately for this day to come! The commemoration of the life and legacy of my father, John Lewis Steptoe. There will be a celebration for the John Lewis Steptoe Monroe Street Co-Naming and the forthcoming Nationwide Tour of the play, “Mufaro’s Beautiful Daughters.” I am inviting several children’s authors and illustrators to read John Lewis Steptoe’s Books. Community residents and leaders, spoken word artists, musical performers, storytellers, and many more will be in attendance for this !

Javaka and John at 840A Monroe Street, in John’s work studio that he designed and constructed himself. 1987

On Saturday, August 27th, 2016 at 11:30am join us, the John Lewis Steptoe Estate, Family and Friends in celebrating the Street Co-Naming of this beloved African-American Children’s Book Author and Illustrator, on his childhood block Monroe Street between Ralph and Howard Avenue in Bedford-Stuyvesant, Brooklyn. So …

Who is John Lewis Steptoe?

John Lewis Steptoe, creator of award-winning children’s books, and a pioneer of African American artists, writers and illustrators, was born in Brooklyn NY on September 14, 1950.

Raised on Monroe Street in Bedford-Stuyvesant. John Lewis Steptoe began drawing as a young child and received his formal art training at the High School of Art and Design in Manhattan.

John with children Bweela on the left of John and Javaka on the left of Bweela at the ice cream store with a woman helping to pose for a scene in Daddy Is A Monster Sometimes. Manhattan New York on Broadway near our old apartment on Riverside Drive at 151 Street Washington Heights, May 1977.

In 1969, at age 18, his first book ‘Stevie’, a story based on his experiences growing up at 840 Monroe Street in Bedford-Stuyvesant., received national attention when it was published in its entirety in Life magazine. It was hailed as “a new kind of book for black children.” John Lewis Steptoe, began work on Stevie at the age of 16.

In his 20-year career, John Lewis Steptoe illustrated 16 picture books, ten of which he also wrote. He received honors and accolades including the American Library Association’s Caldecott Honor for children’s book illustration for: The Story of Jumping Mouse in 1985 and Mufaro’s Beautiful Daughters in 1988, He also received the Coretta Scott King Award for Illustration, for Mother Crocodile (text by Rosa Guy) in 1982, and Mufaro’s Beautiful Daughters, in 1988.

John Lewis Steptoe hoped that this books would lead children, especially African American children, to feel the pride of their origins. Growing up he did not see many images of African American children and wanted to change that. He frequently spoke to audiences of children and adults about his work. While accepting the Boston Globe/Horn Book Award for Illustration of Mufaro’s Beautiful Daughters, an African Cinderella story was acknowledged by reviewers and critics as a breakthrough, he said, “I am not an exception to the rule among my race of people I am the rule. By that I mean there are a great many others like me where I come from.”

While accepting the Boston Globe/Horn Book Award for Illustration he said, “I am not an exception to the rule among my race of people I am the rule. By that I mean there are a great many others like me where I come from.”

John Lewis Steptoe remains an inspirational artist, a visionary who highlighted the best of Bedford-Stuyvesant/ African American culture with pride.

While living on Monroe Street he was an active member of his community. He was a strong advocate for the children on the block and would frequently hand out his books to the children in the neighborhood. He felt it was important for children to have realistic role models. He was someone that you saw every day yet was known nationally for all for his great achievements. John Lewis Steptoe was the Block Association President for several years where he was an active participant of community events for the neighborhood children. He would often visit P.S.309 to talk to the students about his books.

Since his death there has been an exhibit of this artwork at the Transit Museum, his name is engraved in the Brooklyn Botanical Gardens Celebrity Path, Public School 181 has been named the John Lewis Steptoe School of the 21 Century. His named is etched in glass at the African American Heritage Center at the Macon Branch of the Brooklyn Public Library, his artwork from his first children’s book, “Stevie” are permanently displayed in the Raymond Bush playground in Bedford Stuyvesant. Public School 181, Flatbush, Brooklyn is named the John Lewis Steptoe School of t

he 21st Century. ‘Mufaro’s Beautiful Daughters’ has been adapted as a play traveling nationwide and was chosen by the children’s librarians at the New York Public Library as one of the ‘100 Great Children’s Books/100 Years.

My father was a role model for me, my brother Javaka and all children of all cultures in his great efforts to break through barriers to change society and literature for the better. On August 27, join us in remembering and honoring John Lewis Steptoe. For more information on this historic event, visit: www.johnsteptoe.com

Why Black Lives Need to Matter Since Blue Lives Already Do