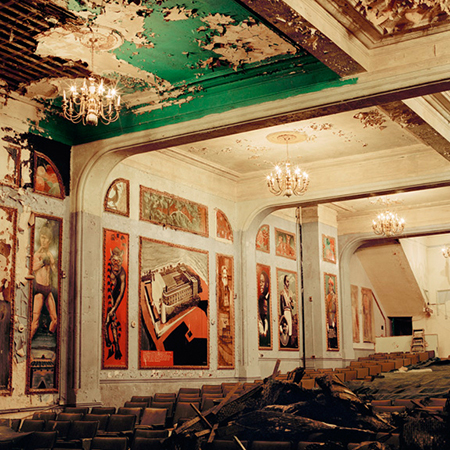 “There is the lack of understanding about estates and how to protect your estate even in your demise.”
Councilman Robert Cornegy
By Mary Alice Miller

Mr. Clarence Hardy holds a picture of Judge John Philips in Front of the Slave Theater – which he claims his family owns. Photo: Hiroki Kobayashi

The recent private sales and proposed development of the Slave Theater and adjacent properties have exposed raw wounds. The properties, first sold in 2013 to Fulton Halsey Development Group after the 2008 death of Judge John Phillips for $2.5 million, then resold in 2015 for $18.5 million to Fulton Halsey Holdings, LLC, are slated to become central Brooklyn’s first office tower complex with a Manhattan-style atrium. Preliminary architectural plans reveal an atrium to replace the Slave Theater that leads to a proposed office complex on the Halsey Street property.
The community’s fond remembrances of the Slave Theater and all it stood for may not agree with erasure of yet another icon of Black history and culture. But the developer can build as-of-right, with no requirement for public input.
When Judge John Phillips decided to run for district attorney, prompting a declaration of temporary incompetence in 2000, it seemed as though Phillips also lost control of his real estate holdings including the iconic Slave Theater. But the Clarence Hardy family states Phillips transferred the properties to them in 1999. Since then, the Hardy family alleges all manner of deed fraud, including an ACRIS record that lists John Phillips as a party to a 2013 transaction for the Slave Theater’s 1215 Fulton Street address, years after Phillips’ 2008 death, as well as various actions taken by Samuel Boykin, who presented himself as a blood relative of Phillips.
Confronted by a conundrum that began long before he came into office, Councilman Robert Cornegy is being pressured to step in and save the Slave Theater for its alleged rightful owners and the community. Pending the commencement of any criminal investigations into deed fraud, Cornegy can only attempt to mitigate complete erasure of the Slave Theater and Judge John Phillip’s vision. In that light, Cornegy has offered two propositions to the developer.
“If it goes forward and, this is very important, there is no way to show fraud, and the developer is able to keep the property and go forward with the timeline for demolition with filed plans to begin deconstruction, and if he is able to secure all the permits necessary, I gave him two proposals,” said Cornegy. “One was a public/private partnership similar to what is being done with the Kings Theater in Flatbush, where there would be a full renovation done, a commitment of capital resources from my office, plus their commitment that we could have a 100-year lease and let us have the first entertainment venue in central Brooklyn so that shows and talent from our communities could be displayed and is not cost-prohibitive for local nonprofits or people to use it as a theater space. I asked him to wait until I could get the projected revenue for comparable theaters, i.e., Kings Theater, BAM and other theaters of similar size. We can’t realistically expect a level of altruism on the part of the developer. I have to be able to show them in real numbers how there is revenue that could be generated and goodwill simultaneously for a space that has been important to our community for a long time like the Slave Theater. That is Proposal #1.”
Cornegy continued, “Proposal #2 was a set-aside in that atrium to display the rich culture and legacy of the Slave Theater through pictorials and memorabilia if they would be open to it.”
However, the Hardy family wants no part of that. They will not be satisfied until there is a transfer of that property into their hands. The land battle has been long, protracted and convoluted.

“I made two commitments to the Hardy family. One was that I would organize city, state and federal elected officials to be part of a phone call to see what we could do on the city, state and federal level to uncover any fraud and a commitment that we would pool our resources if there was any fraud that got approved for investigation,” said Cornegy. That phone call took place two weeks ago.
“My office, in particular, would file an injunction to stop demolition if the D.A.’s Office were to illustrate (from paperwork they were given) any indication of fraud. I cannot file a motion without an indication of the D.A. commencing an investigation,” said Cornegy. “That project is an as-of-right project, which means there is no intervention from the city, state or federal government. They did not ask for any tax credits. They are not asking for any help from the city. There is no necessity for me to sign off on anything. They bought it as if anyone would purchase private property.”
Cornegy explained: “We are trying to craft a robust plan that certainly includes a projected revenue stream that is comparable to what they would get in any other circumstance. The concern is the cost. They cannot repair the theater because the infrastructure is crumbling. The best thing they can do now is to demolish it and then build it back. The increased cost of doing that makes it improbably that the developers would do it. My response is let’s work out a public/private relationship in which I would commit capital dollars toward reconstruction if they would commit to a 99-year lease with the city or state to show commitment on both private and public parts. I would be willing to do that. I would commit $3, 6 million or whatever is necessary if we know the theater is going to be in the possession of the community.”
Cornegy has introduced legislation to address deed theft. In addition, Cornegy is working with the Dept. of Finance who has flagged about 95 potentially fraudulent deed transfers to find out if they rise to illegality. “Fraudulent deed transfers occur all over the city but happen to a greater rate in central Brooklyn,” said Cornegy. “There are seniors who did not know that someone transferred their deed until the marshal shows up and they are evicted from a home paid off a long time ago. This is unfortunately incredibly deeper than the Slave Theater.”
“The biggest travesty, in my opinion, is a constant, pervasive issue in our community where the transfer of wealth through real estate and property is not maintained correctly,” said Cornegy. “There is the lack of understanding about estates and how to protect your estate even in your demise.”
According to Cornegy, the situation surrounding the Slave Theater is a symptom of this underlying problem. “The symptom is fraudulent transfer of deeds and property and tax and water liens. We arrived here because of inappropriate estate planning. Had it been very concise as to whom the transfer of property would be and it wasn’t convoluted, we wouldn’t even be having this conversation,” said Cornegy. “I hope members of the community would evaluate and reassess whatever transition plan, or lack thereof, is present in their families so that whatever happens doesn’t rise to this level based on the lack of appropriate estate planning.”

Mary Ward: A Life on Hold