Shange’s “for colored girls...” Returns Home after 46 Years, Relevant as Ever, and Still Ahead of its Time
Advertisement 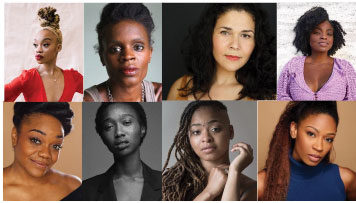 Ntozake Shange’s for colored girls who have considered suicide/when the rainbow is enuf, the groundbreaking choreopoem presented in 1976 at the Booth Theatre in New York City, returns to Broadway this month in all its bold, brassy, beautiful glory and gutsy espousing of 46 years ago, what has become the mantra of today’s world: Black Girls Matter.

In the production, seven women share their stories and their pain, while finding strength in each other’s revelation, anger, humor, passion, joys through a fusion of poetry, dance, music, and song.

A critical hit when it premiered, the late writer’s play captured the spirit and mood of the 70’s era through monologues, and yet, in its timelessness, defines the spirit of our current times as it explores issues faced by women that are as relevant today as they were when Shange created her masterwork.

The Broadway revival of for colored girls sees the shows return to the Booth Theatre, the same theater that was home to its original Broadway run. It is expected that members of the original cast may be in the audience on even given night of its 20-week run. The 2022 cast comprises new stars rising: Amara Granderson as Lady in Orange, Tendayi Kuumba as Lady in Brown, Kenita R. Miller as Lady in Red, Okwui Okpokwasili as Lady in Green, Stacey Sargeant as Lady in Blue, Alexandria Wailes as Lady in Purple, and D. Woods as Lady in Yellow.

In its return to home, Broadway, this celebration of the power of Black womanhood, comes with its unique firsts: the phenomenal Tony nominee Camille A. Brown, “a true superstar of theater and dance” (NPR), is helming the project, the first Black women to serve in the dual roles of director and choreographer on a Broadway production in more than 65 years (Katherine Dunham was the most recent and first choreographer). Ms. Brown’s vision is as fearlessly new as it is fiercely now and feistily aligned in movement, sway and inspiration with her late friend Ntozake’s words. And speaking of Ntozake’s words, audiences for this latest in a series of incarnations of the Shange play, will get to hear the artist’s voice.