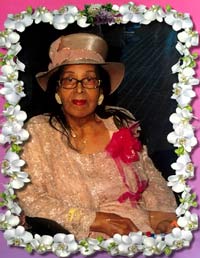 Grace Marie Goode Baker, a graceful, resilient woman and humanitarian, was born on October 26, 1914, in the Bedford-Stuyvesant area in Brooklyn, New York to Thomas Scott and Eliza Burwell Goode. The eldest of five children including Frank, Harold, Henry and Catherine, Mrs. Baker spent her childhood years in Clarksville, Virginia with her maternal grandparents. She attended the Mecklenburg Public School system and was baptized at then Cedar Grove Baptist Church, where she was a member of the Sunday School and was one of the church’s key soloists in the choir.

Once Marie returned to Brooklyn, she joined The Concord Baptist Church of Christ, and remained as a member under the pastorates of Reverend James B. Adam, Reverend Dr. Gardner C. Taylor, and Reverend Dr. Gary V. Simpson. She attended this church, with her mother and other members of the Burwell family, as a member for 90 years. She was a steadfast Christian woman; faith was her Mighty Fortress.

While attending Concord Baptist Church, Grace Marie Goode met her future husband, Henry W. Baker. They married in 1938 and became brownstone owners. It was in this brownstone that they raised their children Delores (who predeceased them at age four), Calvin, and The Twins, Geraldine (“Gerry”) and Audrey. Mr. and Mrs. Baker made sure their children attended Sunday School and participated in many church activities, as well as religious education, cultural events, plays, concerts. At Concord, Calvin, Gerry and Audrey were classically trained to play the piano and sing.

In addition to Mrs. Baker’s commitment to her family and community, she was employed as a medical assistant for a top cardiologist for four decades. She always encouraged her children to pursue higher learning. All three have education beyond the master’s degree level and are productive citizens in their communities and beyond. Calvin was a Managing Director and Senior Portfolio Manager at Brown Capital Management in Baltimore. Marie’s daughters were educators in the New York City school system and served as teachers and administrators in general and special education.

Marie had a creative mind and artistic hands. She could sew well and made clothing for her children. When the children participated in school plays, she volunteered to create and sew crepe paper costumes for the events. Mr. and Mrs. Baker attended every school visitation and activity. While the children were in elementary school, Marie won every cake bake contest and sale for nine years. She was a gourmet cook, baker, and a fine hostess! She always made her home a special place for her family and friends, and she also prepared food for he sick and shut-in, and had her children deliver it.

Mrs. Baker, elegant, dignified and graceful, believed that education began at home and her brownstone was, indeed, a learning center for manners, good character, values, ethic, religious training and social consciousness. As a result, her children witnessed and absorbed the good example of having caring and protective parents and relatives.

She also believed in travel and “seeing the world” as a way of enjoying life at its fullest. She travelled on bus and boat cruises, plane trips, locally, nationally, and internationally. She also celebrated life through a number of activities and events, close to home: getting dressed and wearing stylish hats from her vast collection; attending diverse off- and on- Broadway theater productions, the Chinese Opera, dance productions and more. Mrs. Baker feted her children annually to the Radio City Music Hall Christmas Show and its 6 AM Sunrise Easter Service. In her later years, the Baker daughters continued to take her to the Radio City Hall Christmas until 2018 when she was age 104.

Mrs. Baker was a community activist for some 80 years. Her community leadership and service credits include lifelong active memberships with the 79th Precinct Council and the 500 Quincy Street Block Association, and was a contributor to WBAI-FM. She received accolades from elected officials for her work with children, the sick and shut-in and preparing food for them as part of her missionary work. The National Council of Women of the United States at the United Nations recognized her in 2016, when she was 101 for her contributions to humanity. She was crowned “Queen of Bed-Stuy,” was knighted as a “Saint” by the Universal Life Church, and was a member of the Association of Black Educators of New York (ABENY, Inc.), among other educational organizations.

Everyone was curious about Mrs. Baker’s secret to longevity. She was a progressive thinker and loved homeopathic and holistic remedies. Mrs. Baker was a resilient, active woman of faith. In her later years, this super veteran of life began taking CBD health and wellness products that were physically and cognitively transformative. Her daughters became entrepreneurs of the products because of the positive effects that she enjoyed, and Mrs. Baker became the oldest user of the company’s products. She was a 28-year survivor of a radical mastectomy without having chemotherapy or radiation.

Six years ago, Mrs. Baker entered the Crown Heights Nursing and Rehabilitation Center located in Brooklyn. Her daughters visited her every day, sometimes twice or three times a day to oversee her healthcare, and treatment.

Along with the inhumanity of the COVID-19 pandemic, Mrs. Baker and thousands of other long-term care nursing home residents were in isolation and quarantined for over a year.

Although Marie’s daughters were able to see her from a distance, they knew that isolation at any age is not good for anybody; and that laughter and socialization is good for everybody. Through it all, Marie’s faith in God was the hallmark of her resiliency. She had lived through two pandemics successfully.

Not having been previously ill, Ms. Baker was removed from the nursing home on an emergency basis on Friday, March 19th, 2021, to Brooklyn Hospital. She was diagnosed with a serious infection and passed away on Saturday, March 20th, 2021. The Baker daughters, as always, were with their mother — right by her side.

Grace Marie Goode Baker was predeceased by her parents, her husband, and her four siblings.

Mrs. Baker leaves fond memories of her laughter, humor, style, strength, poise, class; and her love, faith and grace that made her so special. Those memories are cherished by her son Calvin (Lidia); her twin daughters, Dr. Geraldine (“Gerry”), and Dr. Audrey; her granddaughter Caroline (Afolabi) Dokun, and her great grandson, Ayodele Calvin Dokun, plus a host of relatives, surrogate daughters and sons, and many friends.

Lovingly written and submitted by the family of Mrs. Marie Grace Goode Baker.