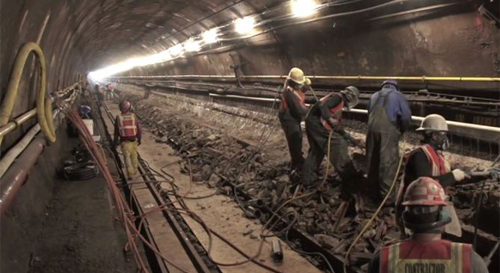 Anyone who lived through the night of October 29, 2012 will never forget the sights, the sounds and the terror that ensued when Superstorm Sandy made landfall.   A Category 1 Hurricane with 80 miles-an-hour winds, Sandy shut down the city. Millions of gallons of water flooded the subways, crippling transportation and shutting down electricity south of 34th Street. Storm surge and a full moon devastated thousands of homes in coastal neighborhoods. Fifty-three deaths are attributed to the storm which caused an estimated $19 billion in damages. Citywide, more than 8,000 homes and a quarter-of-a-million vehicles were destroyed.

One week after the storm, FEMA officials projected maintaining a presence in this area for at least a decade. While it would be easy to dismiss that as an exaggeration, six years later, New Yorkers are still impacted. But Amy Peterson, Director of the Mayor’s Office of Housing Recovery Operations and the Mayor’s Office of Workforce Development sees Sandy’s legacy as positive. “New Yorkers are better prepared and more resilient,” she says, noting that homes in high-risk flood zones are being elevated to meet new zoning requirements with funding from Build it Back NYC. As Director of the Office of Housing Recovery, Peterson was tasked with overhauling Build it Back in 2014. “Build it Back was created to address something that never happened in New York City before. Communities had never been hit that hard,” she says. On the eve of the sixth anniversary of the storm, Peterson reports that the program has been successful. “Of some 8,300 properties and 12,500 homeowners who had severe losses, I can report that 95 percent of the construction projects have been completed. We have served 99 percent of those who needed services,” she says, adding that Sheepshead Bay Court and several other complicated projects are all that remain.

“Sandy was an unprecedented storm,” says Peterson, whose biggest concern has been reaching people who needed benefits and services. “We faced a lot of challenges and came up with innovative solutions.” For Peterson, those solutions include helping Sandy survivors, women and underserved minorities find new careers.   More than 1,600 New Yorkers have been placed in union construction jobs through Build it Back and Sandy Recovery Workforce1 programs. Some 20 percent of workers in construction who were hired through Build it Back were directly affected by Superstorm Sandy. New Yorkers affected by Sandy have also been trained and placed in union jobs as roofers and electricians.

A pioneer in the emerging field of women in construction, Peterson has dedicated much of her career to opening the way for women and minorities to find jobs in an industry that was traditionally dominated by white men. As President of Nontraditional Employment for Women (NEW) from 2007–2014, Peterson spearheaded initiatives to train and place women in skilled construction, utility and maintenance jobs.   Newly appointed as the Director of the Mayor’s Office of Workforce Development, she intends for this trend to continue.

“After Sandy, we began helping people in Far Rockaway get into the construction unions. We have been doing outreach with community organizations to target NYCHA residents and people who need help finding jobs that pay $50,000 a year and above.” Specifically, Peterson notes that hard hats have reached out to veterans and the Green Jobs Initiative has opened up some 3,000 nontraditional jobs. Resiliency initiatives now offer openings in such fields as case management, building inspection, understanding flood regulations, surveying and providing elevation certificates.

Rather than see Hurricane Sandy as a onetime event, Peterson wants New Yorkers to understand how to prep for future storms. “Climate change is real. It’s something the city is addressing in different ways: improving buildings, adding solar-panel installations and building modular homes,” she says, adding that Build it Back has completed 100 modular homes. “When you elevate an 80-year-old structure in poor soil condition, there are a lot of challenges.” Building modular homes can accelerate the process. Petersen says, “This minimizes the impact of construction while improving quality of life in communities.”

Laurie Nadel, Ph.D., is a Contributer for Our Time Press. She is the author of “The Five Gifts: Discovering Hope, Healing and Strength When Disaster Strikes.” (Foreword by Dan Rather)

Wofford Calls for State Investigation Over City’s Taking of Properties