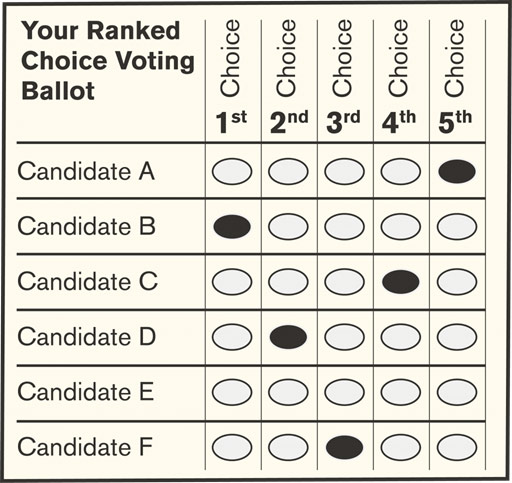 Starting this year, New York City will use Ranked Choice Voting in primary and special elections for local offices.
You can rank up to 5 candidates in order of preference, instead of choosing just one. And you can still vote for just one candidate if you want. How will that work?
Do I have to rank my ballot?
No. You can still vote for just one candidate if you prefer.
If I rank, do I have to rank 5 candidates?
No. You can choose any number of candidates from 1 through 5.
How is the vote counted?
If no candidate wins a majority of the votes in the first round of voting, the candidate with the least number of votes is eliminated and their votes are distributed to the voter’s second choice. This continues until all but two candidates have been eliminated and all ballots with other candidates listed first are redistributed among the top two finishers.
Why are we using Ranked Choice Voting?
New Yorkers elected to use Ranked Choice Voting in a 2019 ballot measure. It passed with 73.5% support. Ranked Choice Voting in primary and special elections with several candidates strengthens democracy.
In most elections in New York City, the winner of the primary gets less than 50% of the vote. That means candidates can focus on a small group of voters rather than trying to build a large coalition of supporters. With RCV, voters have more choices, and candidates will be forced to go beyond their base and appeal to a broader spectrum.
Voters have a greater chance to express their views more fully by voting in order of preference, favoring candidates according to their positions, and where relevant, their records of public service.
Compared to winner-take-all elections, RCV in multi-winner contests allows more diverse groups of voters to elect candidates of choice. Hoping to get as many second and third place votes as they can candidates are motivated to listen carefully to all voters – not just a narrow base – and address their concerns with civility.  This promotes diversity of political viewpoint as well as diversity of candidate background and demographics.
Ranked Choice Voting also eliminates the need for costly, lower-turnout run-off elections, saving taxpayer dollars for essential public services and sparing voters additional trips to the polls.
http://www.electnyc.org