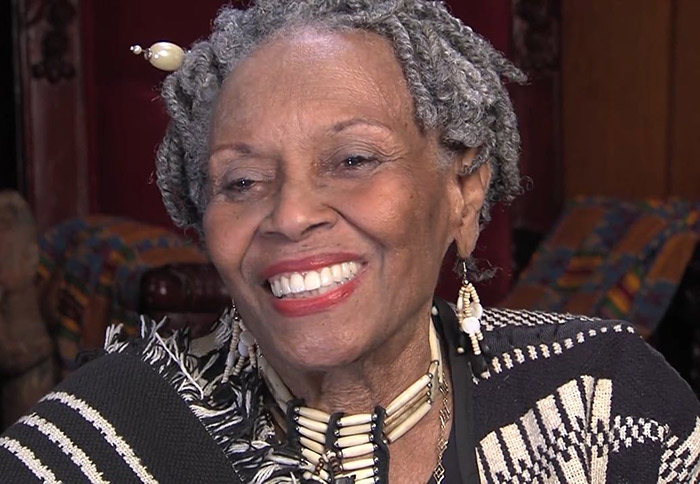 On Thursday October 7 at approximately 7:10 P.M., NY State Board of Regents Vice Chancellor Emerita Adelaide Sanford, who turns 95 next month, was shouted down and prevented from speaking by a gang of individuals who invaded a Zoom forum entitled, “Should Black People Vote for Either Presidential Candidate.” As Regent Sanford began to weave a story about sacrifices made to secure the right to vote by ancestors including her Grandmother, a formerly enslaved woman, suddenly one voice, then two voices, then several or more, began to call her words such as Nigger, Cunt and Stupid while blasting music, and obliterating the screen with Nazi imagery, homosexual pornography, a picture mocking George Floyd and violent images such as people being burned alive.

They also wrote over 400 times on the chat screen, the words “Niggers Should Die.” As the host would mute one invader, another would begin the chanting of the epithets. Eventually there was, what Dr. Sanford accurately described, as “a cacophony” of sounds with the word Nigger predominating. Audience members and panelists were horrified that the meeting was disrupted but even more horrified that this was mainly directed at a distinguished and venerated elder, who in the words of one of the panelists, Betty Dopson, “has more than paid her dues”.

Dr. Sanford although known for her work as a NY State Regent is perhaps even better known as an activist, who as an elder was arrested, and strip searched as she protested police violence at a demonstration in the 1980’s called “The Day of Outrage.” She is even better still, known as an educator and the former Principal of Crispus Attucks Elementary School, P.S. 21. There she led the school that was the lowest performing in the District and transformed it into the highest performing Urban School in The State as measured on standardized tests. The Question many would ask is why anyone would disrespect such an esteemed elder in this way.

One of the panelists, Omowale Clay, said that this activity to crash Zoom Forums and meetings ’is called a “Zoom Bomb” and is alleged to be, in part, caused by faulty internet Security on the part of Zoom. Others said that this is a random activity of hackers that has occurred even to public school children as they tried to learn their lessons remotely. Dr. Sanford and many of the participants in this forum, however, believed that this Zoom Bomb was not a random activity, aimed at no one in particular. Dr. Sanford said that the invasion of this specific meeting was related to how important the topic was to the invaders. She said, “The Vulgarity was just the weapon they used. The objective was to stop the spread of the information we were sharing, to block our free speech and in short to bring about voter suppression.”

The consensus of the panelists was that the perverted violent imagery shown in this cyberattack is a harbinger of what fascist thugs will attempt to do in real life should they attain state power through the re-selection of Donald Trump. CEMOTAP Co-chair Betty Dopson noted that the forum was re-done the next day without an audience and without disruption and will be posted on social media. The forum was co-sponsored by CEMOTAP and the Black Solidarity Organizing Committee and featured, Professor Leonard Jeffries, journalist Gloria Dulan-Wilson, CEMOTAP Co-Chairs Betty Dopson and James McIntosh, UNIA leader Raymond Dugue and December 12th Activist Omowale Clay. A video file of the disrupted forum is being forwarded to the Governors of NY and NJ and other officials and agencies thought to have a responsibility to prevent voter suppression and to protect the rights of citizens to free speech and the right to vote.

CEMOTAP HAS POSTED A $1000.00 reward to anyone who can bring these hackers to justice.