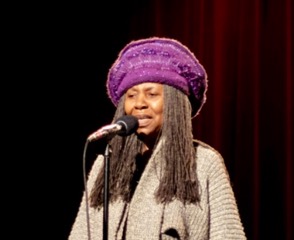 An oral tradition that goes back thousands of years to the ancestral lands of Africa came alive last month when Phyllis Bowdwin took center stage at Lincoln Center during the acclaimed Moth* annual storytelling showcase.

Bowdwin, a retired educator, is an heir to the griots of long ago who passed down culture, music, philosophy, history, our stories and so much more.  She masterfully shared her story to a thundering ovation at March 29th event.

So what’s the story behind how this 21st century woman found herself immersed in the ancient art form of storytelling?

Phyllis Bowdwin’s route to storytelling may first appear circuitous, but in fact it was her destiny from the start.

In the 1960’s, Ms. Bowdwin began her career as a secretary/bookkeeper, and made jewelry on the side.

She became a casting director at ABC, then moved on to adult public education with the New York City Department of Education.

She traveled to Taxco, Mexico to study silversmithing and to the Ivory Coast to learn filigree from a goldsmith in the town of Korhogo. These apprenticeships contributed to the skills she needed to tell a story in precious metal.  She created what she called her Middle Passage brooch, a piece of jewelry purchased by the Smithsonian Institute in New York, along with her 18-by-24-inch poster.

This was her first story in silver: the cramped quarters of the hull of a slave ship. “I decided to make the pin because I was disturbed that nothing had been done in terms of erecting a monument or permanent commemoration of the time of the Middle Passage,” she told a reporter in 1994.

More recently, she credits Mel Glen, a teacher at a United Federation of Teachers’ writing workshop for nudging her into the oral storytelling arena. Glen repeatedly urged her to pitch one of her stories to The Moth, a not-for-profit organization devoted to the art of storytelling worldwide. The organization’s story slams the call for contestants to stand on the stage and tell their true stories within five minutes without the aid of props or papers.

With her mother’s Alzheimer’s diagnosis and her own memory slipping, Phyllis flatly refused.

But later, when she learned The Moth planned to conduct a story slam in the Bronx, her borough of residence, she attended out of curiosity. She found the staff to be surprisingly young, efficient and very friendly — which made her feel right at home. Phyllis pushed through stage fright and won that story slam, her first, on January 13, 2017, her deceased mother’s birthday.

On February 20th, she competed against 9 other story slam winners at a Grand Slam, which took place in Brooklyn at the Williamsburg Music Hall.  She didn’t win, but Jennifer Hixon, the event’s senior producer, liked her story so much she offered her a slot on The Moth’s Main Stage at Lincoln Center–her first gig!

A month later, Phyllis performed a trial run of her story at The Moth’s Main Stage at UCLA in Los Angeles, California..  The Moth flew Phyllis to California and paid all the other expenses for her March 20th performance at UCLA.

A week later, back in New York, she stood on the stage at Lincoln Center and captivated the crowd with her true story about a mime who molested her in front of a lunchtime crowd and how she fought back.

There were no judges to award her a trophy, but positive responses from the founder of The Moth and the audience convinced her she was a winner.

Adding to her accolades, one of the Lincoln Center contestants invited Phyllis to retell her story in New Haven, Connecticut. Now, The Moth is sending her to do the Boston Main Stage on April 26-27th.

Though a retired educator who left the stage of the classroom, Phyllis has found a second stage on which to make her encore performance in life: storytelling.

Moving forward, her goal is to put together a one-woman show. She wants to explore the professional storytelling circuit because she has many stories to share. She told Our Time Press, “Everyone benefits from a good story. People listen, relax, open up and relate.  Storytelling helps break down barriers and foster understanding.

“It helps us see that we are all human, we are all one. This is what I want to do when I grow up.” This story about Phyllis’ encore as storytelling continues to evolve.

Reporter’s note: The Moth, now in its 20th year, is a nonprofit group headquartered in New York City dedicated to the art and craft of storytelling worldwide.

The Role of the Artist in Telling Our Stories