Photographer Chester Higgins, Jr. Has a Spiritual Journey in The Sacred Nile
Advertisement 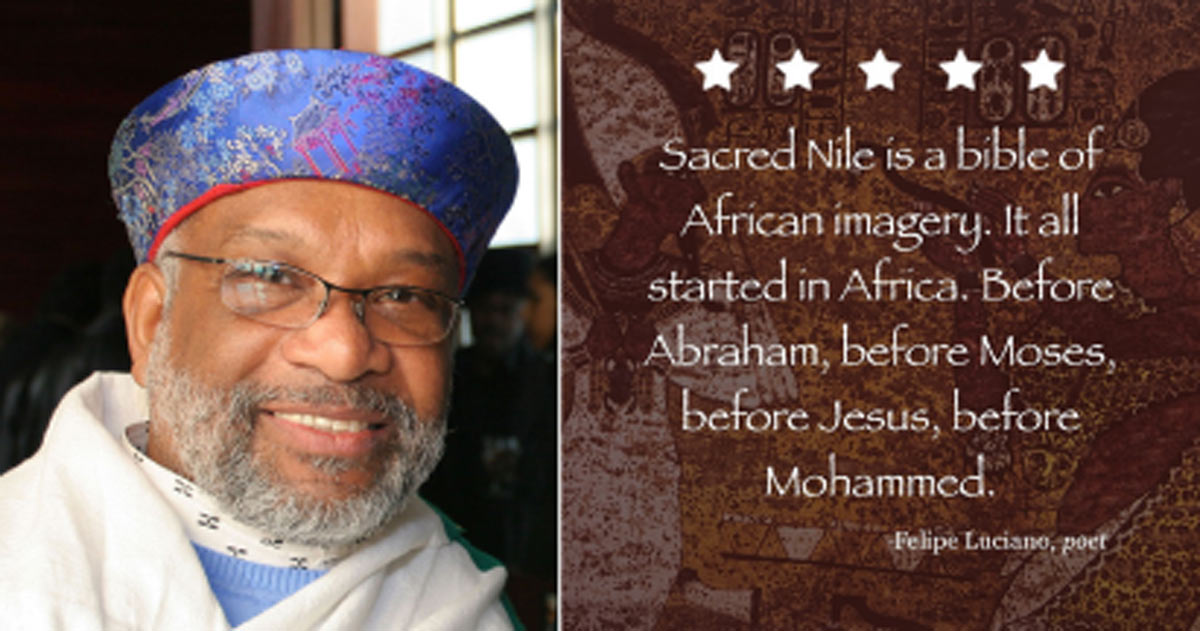 In The Sacred Nile, acclaimed photojournalist Chester Higgins, Jr. intertwines powerful photography with spirituality in a journey depicting African peoples who have lived along the banks of the African river since antiquity. The book, with texts from writer Betty Kissam, was 50 years in the making. “I have made some 20 trips to Egypt, 18 trips to Ethiopia and 4 trips to Sudan made yearly during two to six weeks field trips,” Higgins, a longtime Fort Greene resident, told Our Time Press.
Spirituality is an important part of Higgins’ life. Growing up in Alabama during Jim Crow, he was known as a child preacher giving powerful sermons. As an undergrad at Tuskegee Institute in the 1960s, he discovered the spiritual power of photography. Legendary Tuskegee photographer P.H. Polk, known for his photographs showing the dignity of African American life in the rural South during 1930s, became his mentor. “P.H. Polk was my first mentor. He placed the first camera in my hands,” he said. “I spent a few years guided by his example and under his influence. He represented the best of the Tuskegee School of photographers.” Later his mentors would be photographer Gordan Parks and artist Romare Bearden.
Over the years, Higgins has published wondrous photography books vividly documenting the African Diaspora. This includes Feeling the Spirit: Searching the World for People of Africa; Elder Grace: The Nobility of Aging; Echo of the Spirit: A Photographer’s Journey. His work has been exhibited in the Smithsonian and the Museum for African Art and he’s received grants from the Ford Foundation, Rockefeller Foundation, and Andy Warhol Foundation. He’s photographed for Look, Life, Newsweek, Time Fortune, Essence, Ebony and Black Enterprise.
From 1975 to 2014, Higgins was a leading photographer at the New York Times. His photography style on documenting Black peoples’ lives whether historic or every day is legendary. They are distinctive, remarkable, and poignant. “I don’t take pictures, I MAKE them,” he explained. “My personal mission as a New York Times photographer was to make sure that the issues of decency, dignity and virtuous character would always be upfront in any image that I made of my people.”
Our Time Press recently spoke with Higgins about The Sacred Nile and his spiritual journey through the ancient riverbanks.

OTP: You visited Egypt for the first time 50 years ago. Was that origin of the idea to create this book?

HIGGINS: On my first visit to Egypt 1973, I had no idea until I arrived and experienced the sight of pyramids, monumental temples and museum artifacts that I realized I was looking at the remains of the grandest African and human experience ever. I spent more than 20 years going back and forth just following the spiritual attraction of this place–the monuments, the artifacts and tombs. Just opening up to and embracing this ancient past. After much study and amassing a huge research library, it become clearer to me that there was indeed a book here for me to do and pay homage to our ancestors.

OTP: Why was it important for you to showcase the beauty and strength of Black women in The Sacred Nile?

HIGGINS: The glory of the African women has been historically censored in Western civilization and the Bible. We don’t have the imagery in Western culture of divine women, but in ancient Egypt, this recognition and adoration of the divine African women is expressed in stone portraits in so many forms all over the place as well as underground in tomb paintings. It was amazing to see the African woman in all her divine glory and I was so excited to make a photographic record of these messages left behind thousands of years ago that speaks directly to the sacred worthiness of the African woman.

OTP: You reflect on the role of Africans along the Nile in creating spiritual faith. You were a child preacher growing up in Alabama. Did that spirituality add to your insights on African spirituality?

HIGGINS: Historical records in stone show that African people were the first to have a sacred dialogue with the divine. My early spiritual and religious experiences enabled me to recognize the ceremonial messages carved into the stone walls and columns and to faithfully interrogate their meanings.

OTP: You discuss soul ascension and Egypt being a nation of faith and temples. How did visiting your first Unas tomb personally impact you?

HIGGINS: The Tomb of Unas is a time capsule. The tomb is 4700 years old occupying three underground vaulted chambers underneath a pyramid. Inside, lining the tomb walls, is the earliest spiritual expression ever with over 300 vertical lines of holy scripture that extends from the floor to the 12-foot ceiling. This chiseled writing in stone speaks to every religious concept that we know; nature, the soul, spirit, faith, a moral compass, life after death and the ascension to heaven of the king’s soul AS it is rejoined to the ENERGY of the cosmos. This tomb proves the ancient sacred agency of African people. Its very existence proves that religion, as we know it, stands upon the cultural shoulder of ancient Kemet (the Black land). Unas is our messenger from the past bearing the ancient good news for the present.

OTP: Your research has made you an Egyptologist. Who were the historians that influenced your interest in Egyptology?

HIGGINS: I would prefer the description of an independent Egyptological researcher. The historian who set fire to my imagination and love of ancient Egypt is the late Dr. John Henrik Clarke. I would visit him at his home library on the first floor of his brownstone on Harlem’s Striver’s Row sit on the floor and be entranced for hours by his description of ancient Egyptian history. There is still so much to learn. Our people first created civilization, the first to become literate, developed astronomy, mathematics, medicine, agriculture and built and dedicated monumental structures to worship their God Amen. Over time their colonnade architecture, which is called Empire architecture spread to Greece, Italy and all over the world. We see this architecture in our midst as buildings fronted with columns used by government and financial institutions. The most unique monumental design of their architecture is the obelisk, a square monolithic stone structure that rises high and is topped with a pyramid — here we call it the Washington Monument in DC.

BAM welcomes back Gina Duncan as our incoming president