New Billboards to Collect Data from your Cell Phone
Advertisement 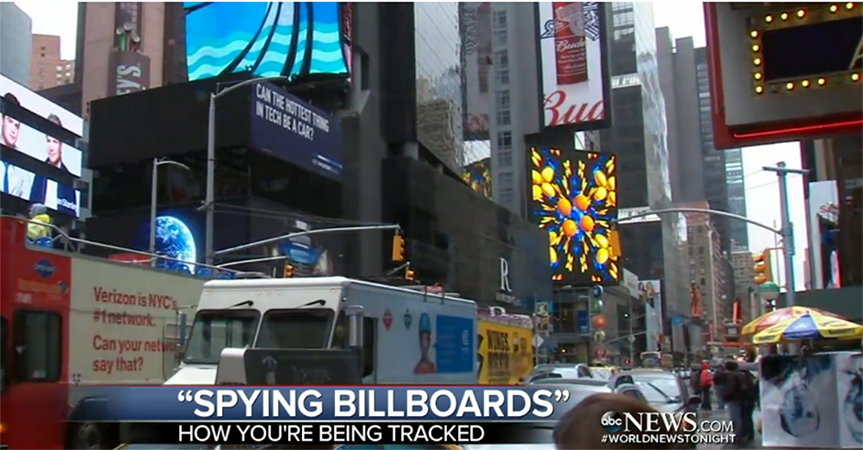 U.S. Senator Charles E. Schumer today urged the Federal Trade Commission (FTC) to investigate the use of “spying billboards”, which are popping up in cities across the country. Specifically, the new billboards have the ability to track a person’s every move using locational data on a person’s mobile device. Companies often use locational data as a way to boost their consumer information base that can be used to market goods and services to these consumers or as data to sell to other companies. Schumer said that the collection of such data may violate the privacy of Americans and therefore, constitutes a deceptive trade practice because most consumers do not know that they are being tracked. To combat this invasion of privacy, Schumer is urging the FTC to require that billboard companies, like Clear Channel Outdoor, offer an opt-out option for consumers who do not want to be monitored or tracked.

“A person’s cell phone should not become a James Bond-like personal tracking device for a corporation to gather information about consumers without their consent,” said U.S. Senator Charles Schumer. “No one wants to be followed or tracked throughout their day, electronically or otherwise, so these new billboards not only raise eyebrows, but they raise some serious questions about privacy. New Yorkers and tourists in Times Square could be giving up a treasure trove of personal information without even knowing it. With tens of thousands of these new spying billboards popping up in cities across the country, including right here in New York City, the feds should step in and investigate. Moreover, companies should be required to offer an opt-out option for consumers who feel this violates their privacy.”

Clear Channel Outdoor Americas recently partnered with several companies to create Radar, an initiative to track an individual’s travel patterns and behavior through the locational data on their mobile device. Clear Channel Outdoor has tens of thousands of mobile and digital billboards across the United States, including some in New York City. The company plans to provide advertisers with data on individuals who pass by these billboards – some of which are equipped with small cameras that collect information. Its RADAR initiative has already begun in New York and Los Angeles, and plans to target other cities across the country this year. Schumer explained that by using the data and analytics, Clear Channel can amass a collection of information such as the average age and gender about individuals who view a particular billboard, in a certain place, at any given time.

According to its website, Clear Channel Outdoor says that “using anonymous aggregated data from consumer cellular and mobile devices, Radar measures consumers’ real-world travel patterns and behaviors as they move through their day. Analyzing data on direction of travel, billboard view ability and visits to specific destinations. This movement data has been mapped against Clear Channel’s displays, allowing advertisers to plan and buy, to reach specific behavioral audience segments. Radar can also help advertisers measure consumer behavior following exposure to an out-of-home ad, allowing them to quantify campaign return on investment…” Clear Channel Outdoor says that its initiative can measure the impact of “Out of Home” advertising on multiple consumer actions.

Schumer today urged the FTC to allow consumers to opt out of the billboard tracking program. Schumer explained that this could be a step too far because individuals are unaware that their movements are being tracked and urged the FTC to make companies notify consumers if they use this technology.