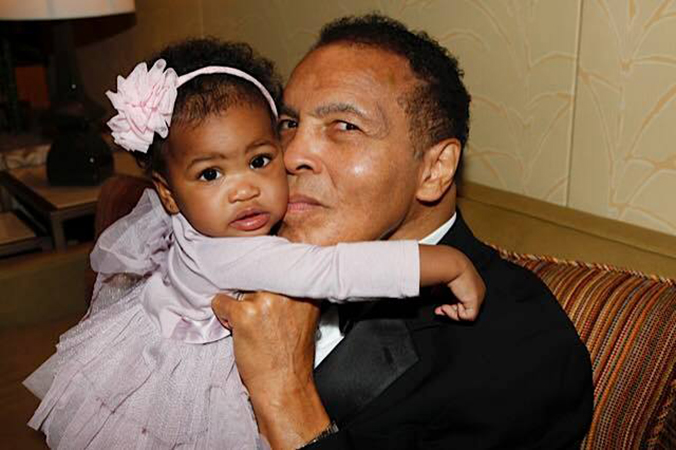 Hours before her famed father passed away, Laila Ali, a former world champion herself, posted a throwback photo of him with her daughter, Sydney, who was born in 2011. “I love this photo of my father and my daughter Sydney when she was a baby! Thanks for all the love and well wishes. I feel your love and appreciate it!!”

The passing of “The Greatest”, Muhammad Ali, has triggered a flood of reminiscences by admirers from around the world.  If you met him or were even just in his presence, those memories come back and his magnetic hold.

Muhammad Ali had been a hero of mine from when he was “Cassius Marcellus Clay, the prettiest fighter in the world today”.  I just thought he was too cool and too exciting and that Sonny Liston was going to kill him.  But that was based on the wishful thinking of white sportswriters and Cassius Clay “shocked the world” against Liston, shocked it again and kept shocking it in the years that followed.

His refusal to go in the Army, be stripped of the title in his boxing prime and give up millions of dollars in earnings on principle, made him a figure unlike any athlete we are familiar with today and can only be compared to the African-American singer, athlete and social activist Paul Robeson, blacklisted during the anticommunist hysteria of the 1950’s.  When the Supreme Court ruled in favor of Ali and he began his comeback, just the mention of his name was pulse-quickening.  Every word you could read about him was devoured.   He was a heroic black man.

Joe Frazier was the reigning heavyweight champion and when the fight was announced it was universally hailed as “The Fight of the Century”, the biggest single sports event ever to be pay-per-view around the world.

At that time, I was working at my father’s film production company, William Greaves Productions, Inc., a mom-and-pop shop with offices on West 54th Street, above what later became Studio 54.  We were doing films for the government, foundations and private industry when I took a call from Robin French, associated with an entity called Guts, Inc., and he asked if we’d be interested in producing a film on the Ali-Frazier fight in Madison Square Garden on March 8?   I said we’d get back to him when my father came in.

And it really was consideration to take on the project.   In fact, dad had recently left the Emmy-winning Black Journal series to concentrate on the work we already had at WGP, a film for H.E.W., From These Roots for Exxon (winner of over 20 international awards), and completing the feature-length Symbiopsychotaxiplasm Take One, which has become acclaimed some 45 years after its release.

Of course, we said yes and within days promoter Jerry Perenchio and his wife flew into New York, came by the office and took us to one of those restaurants where the waiters hovered around and Jerry’s cigars were brought to the table.

Greaves’ concept was to have three production crews simultaneously covering the camps of Ali, Frazier and the usually behind-the-scenes world of the promoters for the month leading up to the fight.  For the fight itself, ours were the only film cameras allowed, and we had an unprecedented 12 cameras trained on the event, not counting the time lapse of the arena being readied.

After that dinner, things began to happen all at once, and even before production teams could be brought in, we were grabbing a camera and mike to shoot the circus that was the first press conference with Ali and Frazier, that now opens the film “The Fight”.   Dad quickly scaled up the company, the first month’s filming was done, and on March 8th Madison Square Garden was the center of the universe and our trucks were rolling in through the security gates at 5am.   I hadn’t slept much the night before and barely for the next 4 days.

The second time I personally saw Ali was about midday during our setting up when there was a call over the walkie-talkie that Ali was in the arena.   I grabbed a Nagra recorder and a Sennheiser 805 shotgun microphone and ran up the stairs joining a cameraman already heading to where Ali was walking the upper aisles talking trash about Joe Frazier.    As he was leaving, dad was on the walkie-talkie, “Did you get!?  Did you get it!?”  “We got it.”

Finally, the fight.  After Round Two, over 30,000 ft. of 16mm film began coming in to be transported to the lab, printed, negative logged, print copy edited and synchronized with sound, negative cut, sound tracks mixed, negative blown up to 35 millimeters and prints shipped to theaters across the country by Friday.

It was an adrenaline-propelled week after the main event with ever-pressuring phone calls from the West Coast asking after the product, a shortened version of the fight itself.  Finally, with the editing team having locked the picture,  I was at the elevator when the door opened and dad stepped out holding a film can and said, “Where are you going?”  I told him I was going home.  “Oh no, my boy, I need you to edit this tape.”  He had just come from the narration recording and he felt that sometimes the narrator’s inflections were a little too enthusiastic when Frazier landed a punch and he said that I’d know what to listen for in the different takes and he didn’t want anyone else to do it.  And of course it was needed immediately at the mixing studio.   The deadline was met, a neat trick at the time and the film opened as scheduled on Saturday morning.

I finally got to meet Ali at his camp in the Poconos.  And just as the footage in the editing room was revealing, in person he was one of the quietest and most gracious people you would ever know.   He showed us around the compound and I got to sit at the right hand of Muhammad Ali at his training table eating beef stew and dark bread.   I can still scarcely believe it.  It was one of those special times you put in a memory box with thanks.  He really was “The Greatest”.

Note: We’re looking for a venue for a free screening of the rarely-shown long version of “The Fight”, a version we call the “Director’s Cut”.  This is the one you can’t get online.