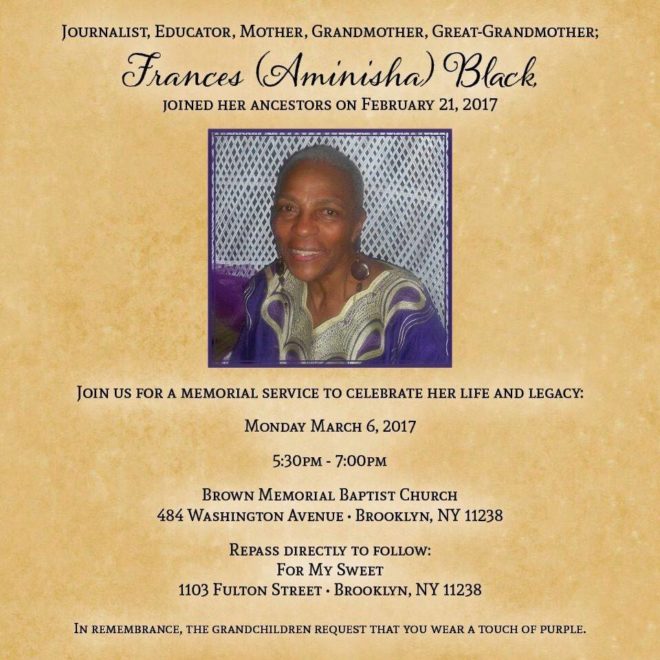 An icon of New York City’s Black cultural community has joined the ancestors. Aminisha Black was one of the founders, in 1969, of The EAST, a groundbreaking cultural and educational organization rooted in the self-determination ethics of Black Cultural Nationalism. Her love/work contributions there – and afterward to the larger community – will long be remembered.

Born Frances Lee in Pendleton, South Carolina in 1940, Aminisha was the only child of Lena and Clarence Lee. She moved to New York City in her early twenties and soon became involved in the cultivation of young minds – an endeavor that would become her lifelong passion. As Brooklyn’s pulse quickened with the currents of Black Power and African heritage, Aminisha bloomed into a kind and committed advocate.

Fikisha Cumbo met her in 1967 when they worked at the same job. After leaving to teach junior high school, Fikisha met Jitu Weusi (Les Campbell) and others involved in the Ocean Hill-Brownsville campaign for community control of schools. “Aminisha said, ‘Invite me to something so I can meet one of those fine brothers you’re hangin’ out with!’“ Cumbo recalls. “So I brought her to a party. She sat in a bay window – Afro cut low, big earrings and a beautiful African dress. Jitu got a look at that woman and sat there talking for the rest of the evening.”

That was the start of a long love and marriage blessed with five children, in addition to Aminisha’s two young boys, Pamoja and Amani Fruster. The couple’s firstborn was Kweli, now a technical writer for a contractor with the MTA; then came Nandi, a New Orleans-based defense attorney; Makini, a high school guidance counselor in Atlanta; Hazina, a criminal justice professor in Birmingham; and son Kojo, an assistant principal at a junior high school in Brooklyn.

Pamoja and Amani are deceased – pain that Aminisha must have channeled into the compassion for which she was known. But her legacy runs deep with 13 grandchildren and one great-grandchild. Although she and Jitu parted some years ago, she was proud that they were able to continue parenting successfully. He joined the ancestors in 2013.

Lolita Standard was one of Aminisha’s oldest friends. Along with Ramona Bhuya, they were, for a time, the only women around during the earliest days of The EAST’s formation, she says. “It taught me what sisterhood was really about. We had each been the only children in our own families. So if Aminisha needed help, Ramona would call me and I had to go – no two ways about it. I was committed because of the bond of the sisterhood.”

That sisterhood became a twin spine of The EAST as it flourished to become “a sample and example” of vision, unity, cooperative economics and creativity. Added to the day care would soon be a Saturday school for secondary students. When The EAST leased a vacant and cavernous local armory, Uhuru Sasa Shule (Freedom Now School) was born, becoming one of the first and most successful independent Black schools on the East Coast.

Fela Barclift, the first teacher for the girls at Uhuru Sasa, remembers when Aminisha came to help with accounting, but quickly became involved in anything to do with nurturing students. “She really did get it that the connection had to be with parents if children were to reach their potential. So she created a parents network with mentoring and enrichment.”

Aminisha’s juggling of multiple roles with kindness, integrity and focus made a lasting impression on Basir Mchawi. “As our political consciousness developed, Aminisha was there in the midst of our struggles. A leadership Council member, she became head of Bookkeeping and Finance. As editor of Black News, I occasionally had to perform financial tricks to keep our publication operational. Aminisha would hold me and all the other EAST department heads accountable.”

MindBuilders Creative Arts Center in the Bronx gained an assist, and director Madaha Kinsey-Lamb gained a true friend when Aminisha arrived to work there. “She started with accounting and bookkeeping, later helped promote the teen theater company and provided a strengths/skills/interest inventory for our young people,” Kinsey-Lamb recalls. “We developed a warm friendship that, for a time, included a weekly phone call, coaching, listening and encouraging each other’s progress with our writing and other goals.”

Adeyemi Bandele felt her early and lasting impact. “Certainly, Aminisha was an integral component of the founding and success of The EAST. Because of her presence, her gentle, loving spirit, she had an effect on us that caused the membership to gel.”

Aminisha’s sense of commitment will always serve as an example to her friend Abimbola Wali. “I remember when Aminisha relocated to Pendleton, South Carolina to care for her aging mother, and that she kept up with Sister Ramona, who is in a long-term nursing facility. And if I wanted to beat her at ‘Words with Friends’, I had to get help from the computer!”

Those who knew her well will tell you Aminisha always had a project in mind or in progress aimed at serving the community. She was a member of the Parents Advocacy Council based at Medgar Evers College, created Word Power League, a vocabulary initiative for third-graders and spoke of a Kwanzaa film festival she wanted to produce in the south. She was active in her block association and organized a regular and popular Scrabble tournament on the block. Her daughter Nandi says Aminisha was a master herself and that it was a family badge of honor if you beat Mama Aminisha at Scrabble.

Her newsletter, “The Parent’s Notebook”, which became a long-running newspaper column in Our Time Press, was a uniquely enlightening and helpful one. It offered not only the expected nuts and bolts of education, agency, health and safety, but also addressed complex social, ethical, political and spiritual issues in an accessible manner. Publisher David Greaves valued the column as an enhancement of the paper’s brand.

“Aminisha’s Parent’s Notebook column gave our readers a deeper understanding of life, with its possibilities and its joys,”” said Greaves.

Nandi said, “My mother asked, ‘What if adults really knew what was going on with kids?’ She wanted to teach others how to engage people on the block, with adults concerned with and caring for the youth, whether or not they were family”. Aminisha was not able to bring this project to fruition before she became ill, but she has adult children who are educators and grandchildren who love her fiercely, so… you never know.

“The bond she had with her grandchildren was unbelievable!” Kojo said. “She provided a safe space, allowing them to be who they are. They really appreciated that and enjoyed being around her, from the older ones to the younger ones.”

Muslimah Mashariki said of her friend, “Aminisha’s impact on The EAST Sisterhood was that of a very principled and kind worker to look up to, an example of great integrity”. And Aminisha was devoted to the end to that sisterhood, attending as many reunions and vacations as she could and keeping in touch with the women – and also the men, with whom she’d built a meaningful and impactful life.

Makini is grateful for the impact someone had on her mother’s life long ago. “I recently spoke with her high school teacher Mrs. Stevens, who turned 93 years old on Valentine’s Day,” said Makini. “My mom was a teenaged mom and to have someone in the school to encourage and keep you moving is quite significant. My mother would go and visit her whenever she was in the south.”

So it appears that Aminisha’s dedication to young people may have been inspired, in part, by kindness once shown to her. By extension, it served to benefit all who knew her. It’s said in some African traditions that the number 3 signifies an opening of the way. Three of Aminisha’s children share here a significant lesson they learned from their mother. May these serve to open the way to greater understanding for us all:

“Her authentic way of seeing community life inspired me. To impart my wisdom and experiences to my students in a way that helps them move forward… it’s a very rich – not material – but meaningful life.

“My mother taught me to learn from history, that things happen for a reason and that we can reform, not repeat, that history. She was very much interested in self-development and had all of her children and some of her grandchildren take the Landmark Forum.”

“Being of service and using your time to focus in on your purpose, which is not always immediately evident. That was a major contributor in terms of assisting me to see that it’s an ongoing process to discover who you are and why you’re here.”