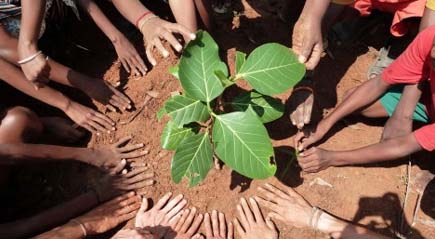 “As for the US Dept. of Energy, instead of suppressing [the roll out of] renewable energy, as is anticipated, this department should encourage innovation in alternative fuels/ energy sources. If developed, that effort would create jobs and the free market would decide what mode of energy would be predominant. If encouraged, we could even end up with a dual system for our energy needs.” – Prospect Heights Community Garden Co-Administrator and Master Gardener Traci Nottingham

On Friday, January 20, 2017 at 12 noon marks the changing of the guards in US national government. Barack H. Obama steps down as the 44th President of the United States and father of the First Family to make way for Donald J. Trump, the 45th President. His legacy is a mixed bag of meritable and unpopular legislation. The unpopular includes the National Defense Authorization Act of 2012 and the Affordable Health Care Act. The meritable includes the American Recovery and Reinvestment Act of 2009 and the opening of the White House Office of Energy and Climate Change Policy.

In his eight years, President Obama had Colorado Senator Ken Salazar to agree to serve as the Interior Secretary in order to establish solar panels, wind turbines and other renewable processes on public lands; designated 3.9 million acres as national monuments under the Antiquities Act; accomplished the United States-Canada Joint Arctic Leader Statement which included indigenous leaders; and signed the Paris Agreement in December 2015. President Obama continued the Presidential Early Career Awards for Scientists and Engineers (PECASE), an award program initiated by President William J. Clinton. On January 9, 2017, Obama named 102 scientists and researchers as 2017 PECASE recipients. Due to the above accolades and others, President Barack Obama is dubbed the Environmental US President.

He, of course, has his failings. Obama has been unsuccessful in getting the Japanese to stop hunting whales and setting the acceptable ozone level to 70 particulates per billion is deemed unsafe for humans to breathe by medical scientists. However, societal change can start from the root, the people. As Spanish poet Antonio Machado advised: “…wanderer, there is no road, we make the road by walking…”

Within several days, the Trump Administration will settle in at Trump Tower in midtown Manhattan to actualize “Make America Great Again”. How will that affect the land, air and water? Good indicators are his nominees for Secretaries of Agriculture, Energy, the Environmental Protection Agency, Housing and Urban Development, Interior and Labor.

The Secretary of Agriculture is still to be named as of January 9, 2017.

Energy Secretary nominee is former Texas Governor James Richard “Rick” Perry. Selecting Perry to this post may be a tacit assurance to the oil and other fossil fuel industries.

Environmental Protection Agency Administrator nominee is Oklahoma Attorney General Scott Pruitt. It is purported that Pruitt intends to strike a balance between environmental protection and freedom for American business.

Donald Trump nominated Dr. Benjamin Carson for Housing and Urban Development Secretary. Carson, who is a successful neurosurgeon, has not held an elected office. Rather, the basis for this assignment is that Carson’s early life was spent in Detroit, one of the United States’ major urban centers.

The Interior Secretary nominee is Montana US Representative Ryan Zinke. Zinke maintains that public lands should remain under federal ownership rather than transfer them to state control.

The Labor Secretary nominee is Andrew F. Puzder. Puzder is the CEO of CKE Restaurants. Most notable in this portfolio is Hardee’s. The Labor Department sets hourly wages, work hours and working condition standards for agricultural, office, domestic and industrial workers. Puzder opposes raising the minimum wage due to the likely response of replacing human labor with automation. He is critical of paid sick leave.

It is very important that the Trump Administration continues to fund The People’s Garden Initiative, which is part of the US Department of Agriculture. The People’s Garden Initiative helps to sustain urban, suburban and small-scale agriculture projects to grow healthy food. Brooklyn Queens Land Trust, owner of 34 community gardens in a highly dense urban area, works with volunteers and collaborates with a variety of organizations to maintain clean soils, grow healthy food and build community. Urban areas need to be able to sustain themselves.

The US Department of Agriculture should encourage new innovative ways to increase crop yields without the use of GMO’s. Government-supported research in organic farming methods should be implemented. This would also create a variety of job types that many call for, from research and testing to the actual farming. GMO labeling should be mandatory across the country–not in a few states.

The US Environmental Protection Agency should not relax regulations that ensure clean water, air and soil. Despite claims of industry-hampering regulations, without them we would have an exponential rise in health care needs which, while lucrative for health care companies, it is not lucrative or conducive for the nation’s populace. Health concerns would cause productivity loss across all sectors and should we have to go to war we would have no worthy soldiers.