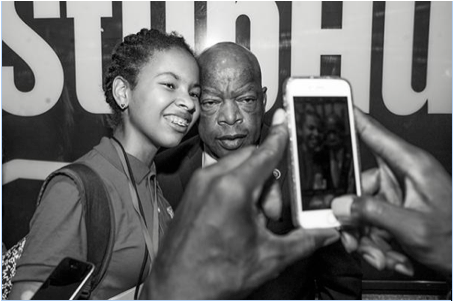 Only 34 other young people in the nation can claim to have done what 12-year-old Adedayo Perkovich did this summer.

The brilliant young resident of Ft. Greene/Clinton Hill, was one of 35 young gifted and talented kid reporters in Scholastic News’ Kids Press Corps, the nation’s oldest and largest student reporting program. And they landed the plum assignment of covering the Democratic National Convention earlier this month.

At the DNC, she talked to voters, fellow journalists, and politicians including Symone D. Sanders, the Former National Press Secretary for Bernie Sanders, and Congressman John Lewis of Georgia’s Fifth Congressional District, with whom she’s seen in the photo we received from Scholastic, Inc.

Here in Brooklyn, when Adedayo has free time, she plays the piano and sings.

Our Time Press is proud to publish Ms. Perkovich’s DNC story here, and hopefully others in the future.

Hillary Clinton accepts her party’s nomination for the presidency on Thursday night at the Democratic National Convention in Philadelphia, Pennsylvania.

On July 28th, Hillary Clinton became the first woman in United States history to be nominated for the presidency by a major political party.

“It is with humility, determination and boundless confidence in America’s promise that I accept your nomination for President of the United States,” the former Secretary of State said. It was the final night of the Democratic National Convention in Philadelphia, Pennsylvania, and the crowd at the Wells Fargo Center was electrified.

Throughout the week, Democratic politicians, public figures, delegates and celebrities came to Philadelphia to express support for the former Secretary of State.

“I hope that Clinton will lead America to higher heights,” said Representative John Lewis of Georgia, “and sees that all of our young people get the best education.” Lewis, who is also a civil rights leader and an author, worked with Martin Luther King, Jr. to help organize the 1963 March on Washington.

A DIVERSE GROUP OF SUPPORTERS

An enthusiastic and diverse group of supporters filled the arena during speeches by President Barack Obama, Vice President Joe Biden and First Lady Michelle Obama, among others.

“In this election,” the First Lady said on the opening night of the convention, “there is only one person who I . . . believe is truly qualified to be President of the United States, and that is our friend Hillary Clinton.”

On Thursday night, Chelsea Clinton and Katy Perry, among others, took the stage. Excitement in the arena was building until Hillary Clinton appeared in a white suit. White was the color worn by women who fought for the right to vote in the early 20th century.

“America’s destiny is ours to choose,” Clinton said. “Let’s build a better tomorrow for our beloved children and our beloved country. And when we do, America will be greater than ever.”

On Friday morning, Clinton and her vice presidential running mate, Virginia Senator Tim Kaine, headed out on the campaign trail. They held rallies in Pennsylvania and Ohio, two states that will be crucial in the presidential election. The “jobs-focused” bus tour is aimed at appealing to voters who are struggling economically.

Flatbush Takes It Back Before It’s Gone